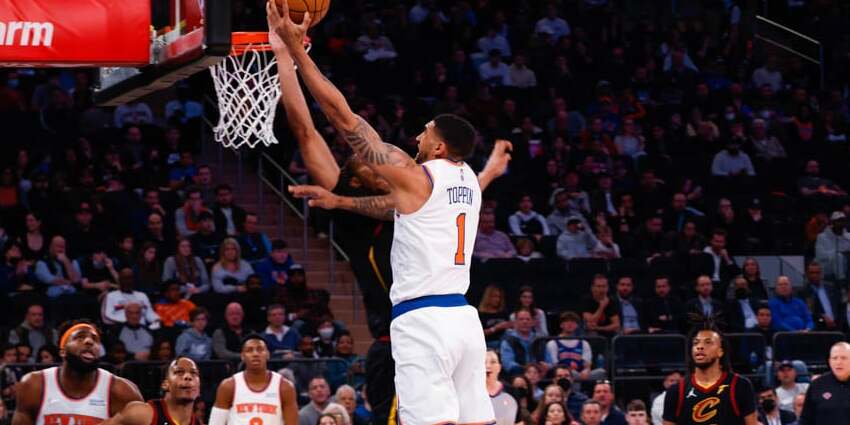 The Knicks got smoked by the Cavaliers despite Obi Toppin’s first 20-point performance and a strong Immanuel Quickley outing.

The Cleveland Cavaliers (43-35) defeated the New York Knicks (34-44) by a final score of 119-101. For the Cavaliers, Darius Garland led the way with 24 points, 13 assists and five made threes while Moses Brown finished with a double-double, tallying 16 points and 13 rebounds. For New York, Evan Fournier finished with 19 points and three made threes while Obi Toppin had 20 points and four rebounds, marking the first 20-point game of his career.

With Julius Randle out, I was a bit surprised to see New York favored in this game, even by a point. The Cavs needed this game to remain in contention for the sixth seed and avoid the play-in, while the Knicks needed this one for cardio and fulfillment of their contracts.

The first half saw a tight game between the two. New York’s defense—we’ll come back to them—wasn’t great, allowing the Cavaliers to maintain a decent lead, but the Knicks kept fighting. Obi Toppin’s energy was apparent from the opening tip, while Immanuel Quickley started off well with some good looks from the outside. Cleveland’s offense, led by Garland, was able to keep New York’s defense at bay but the ‘Bockers offense kept fighting.

Leading into halftime, there was a feeling that New York would remain in this game enough to steal it. Alec Burks’ shooting from the outside was solid but the two keys were Fournier, continuing his hot shooting stretch against Cleveland, and Taj Gibson, getting into the game with a few outside corner threes. Both allowed Tom Thibodeau to tinker around with the rotation as he looked for a defensive position.

my PG finds the open AB in the corner for 3 😌 pic.twitter.com/UdisRt3aHb

Thibodeau, with just nine players available, didn’t have many options. Burks, even with multiple fouls in the first half, stayed on the floor. It took Toppin getting banged up for him to come out. This resulted in way too many Gibson minutes, as the Cavaliers began to attack the Knicks’ veteran big man on the floor. Jericho Sims probably should’ve received more than the 16 minutes he got this afternoon while Quickley should’ve been given more free reign over the Ryan Arcidiacono minutes.

In the third quarter, the dam broke. Cleveland continued to attack New York’s defense, but the offense went cold. Garland continued his torrid pace. Kevin Love got a few great looks. Brown was everywhere on the glass, making it a tough night for both Jericho Sims and Mitchell Robinson. Caris LeVert’s passing (five assists) resulted in some extra passes to find better shots as the Cavs extended their lead to double-digits.

In the end, Cleveland’s third-quarter push was all they needed to get the victory. New York attempted to make it interesting with a few strong Quickley possessions on offense but the Cavaliers did a good job answering most of the Knicks’ questions and walked away with a blowout victory. For New York, it was a good start, but the defense wasn’t there for most of the night, keeping them behind for most of the afternoon and eventually drowning their chances of winning.

The Knicks travel to the Amway Center in Orlando, Florida to face the Orlando Magic (20-58) on Sunday, April 3rd. Tip-off is set for 6 p.m. ET