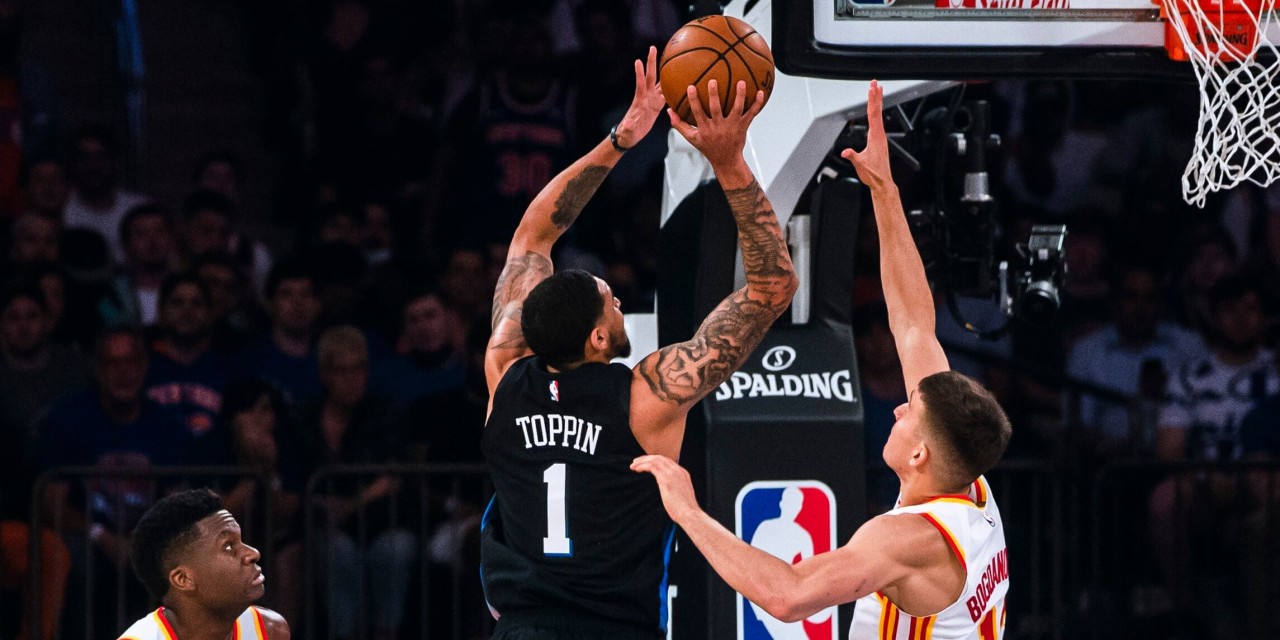 Obi Toppin in April and May is not the same rookie we saw at the beginning of his debut season. The Knicks have a boost off the bench with the forward’s athletic assistance.

Flashback to November 18th, 2020. With the Knicks on the clock with the eighth overall pick, Rose jumped at the opportunity to draft the reigning Naismith College Player of the Year. In his most vivid dreams, Rose imagined Obi Toppin single-handedly raising the roof of the Garden after a thunderous slam in a heated playoff battle. After all, that’s who Toppin was at the University of Dayton. An exhilarating above-the-rim threat at all times, Toppin’s dunks had the innate ability to turn the game’s tide in a single play.

Wednesday night exemplified Toppin’s value to a T. In playoff basketball, the power of momentum can’t be understated. After the sequence shown below, Toppin had turned the Garden from a rowdy crowd to an all-out rock ‘n’ roll concert. As fans, nothing galvanizes us much as rim-rattling dunks, and Toppin’s presence gave both the team and fans a reason to switch the momentum in the Knicks’ favor.

While the Knicks were already up by four points at the time of the alley-oop, the aftereffects of the play had visually shaken up several Hawks players, simultaneously providing a shot of adrenaline to the Knicks on the court.

This sequence by Toppin may have broken the eardrums of several thousand Knicks faithful, but it wasn’t even the only value he provided to the court.

Most assumed that Toppin’s NBA game would revolve around diving hard to the rim on the high pick-and-roll; however, the Dayton standout’s game has developed differently than most anticipated. As he’s playing primarily as a power forward next to a traditional rim-protecting center, Toppin has been asked to develop his perimeter game, often operating from the wing or corner. While he often struggled in this role for the larger portion of this season, Toppin had begun to finally figure his niche out—achieving a 41.7 three-point percentage during May.

In the clip below, Toppin characterized his confidence in his newfound catch-and-shoot ability.

Along with beginning to understand his role as an off-ball sniper along the baseline, Toppin grew confident in one of his stronger skills—transition offense. Over these past two games, Toppin has emphasized getting out on the break to create transition offense. While the Knicks won most of their games via rock fights with a lowly 98.2 PACE (30th in NBA), Toppin acts as an x-factor, as the Hawks likely didn’t gameplan for his transition offense.

Along with Obi Toppin’s propensity to get out on the break, he’s also showcased his newfound confidence in the form of being completely instinctual on the court. While much of Julius Randle’s struggles in this series correlate with him thinking too much on the court before making a decision, Toppin, on the other hand, has been completely intuitive in his nature.

The clip below does a great job of illustrating this point:

As you can see, as soon as Toppin gets the ball along the top of the key, he immediately fakes the dribble-handoff (DHO) to Derrick Rose before ripping it towards the rim and drawing the foul for free points. The value in Toppin’s quick decision-making is clear for the Knicks for several reasons. For one, the Hawks don’t have time to adjust their defense on the fly. Secondly, Toppin might be the Knicks’ most athletic player on their roster, and as his positive development began to occur towards the end of the season, the Hawks were clearly not prepared to combat his skill set.

When analyzing all of Toppin’s positive sequences during Wednesday night’s action, you begin to notice a trend. From the catch-and-shoot corner three, to the transition alley-oop, to his fake DHO into a trip to the foul line, he is becoming incredibly decisive in his actions on the court, and the combination of his athleticism and propensity to push the pace will act as a clear chess piece at head coach Tom Thibodeau’s disposal for the rest of the series. I, myself, critiqued the draft selection of Toppin and was even more critical of him towards the first half of the season.

However, whatever the Brooklyn native may lack in lateral foot speed, he makes up for accountability and sheer hard work. These are two intangibles in Toppin’s profile that cannot be overlooked in this game and life in general. After all, this has been backed statistically as in April and May (regular season), as Toppin sported a plus-minus of +22.3 and +8.6, respectively.

If there ever was a time to be “in” on Obi Toppin, that time has certainly arrived.

»READ: Is Obi Toppin showing us flashes of his true potential

»READ: We’re on to Atlanta: the Knicks-Hawks mid-series roundtable