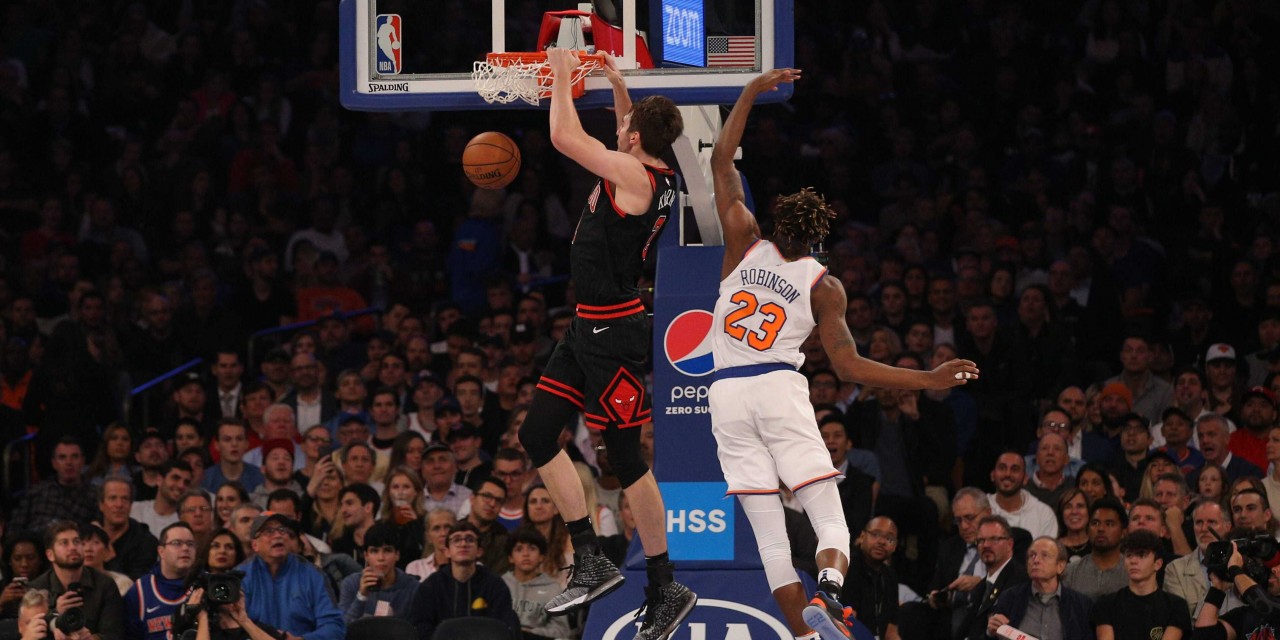 Of all the quotes and comments made from head coach David Fizdale this season, the one that stood out the most intriguing was him calling last season’s developmental roster “a success” because their play resulted in earning contracts with new teams.

For now, we’ll ignore the fact that the Knicks ultimately declined to say any of them for the 2019–20 season.

Teams don’t normally gloat about players who left the franchise to sign free-agent deals elsewhere, but Fizdale made sure for us to now that the organization considered it a success. Now, as we’re moving into the third week of the regular season, let’s take a peek at how some of the old friends are doing on their new teams.

Once a sticking point for fans due to his analytical success, Kornet has moved from a bench role to the Knicks to a bench role with the Bulls. Unlike New York, Kornet finds himself fighting for minutes with two recent lottery picks (Wendell Carter Jr. and Lauri Markkenen) and a fellow free agency signee (Thaddeus Young).

Kornet is much of the same player—if he’s not spacing the floor, he’s an overall negative. His passing flashed early in short bursts and he’s still someone who can defend the rim, however, he’s currently a net negative for a Bulls team with playoff aspirations to boost their young core. Once the shooting comes around, Kornet could be a valuable reserve off the bench.

Mudiay is Mudiay. It’s not the best way to describe his performance, but it also fits perfectly. So far this season, Mudiay is shooting the ball well from two, but struggling to find his stroke from beyond the arc (18.2%). His shooting could be quelled by playing alongside the likes of Mike Conley and Donovan Mitchell, two solid shooters in the backcourt.

It’s worthwhile to observe whether Mudiay can maintain his success as a backup or not. With Utah looking to push for contending in an open Western Conference, a trade could be in store and backup point guard could be under consideration.

Enes Kanter was the majority of the salary for the Carmelo Anthony trade two summers ago. While he wasn’t the best player from that trade—the second-round pick yielded Mitchell Robinson—Kanter played 44 games in 2018–19, providing decent offense and terrible defense before getting waived to play for the Portland Trail Blazers.

Now, Kanter is a member of the Boston Celtics and has missed several games to start the year with a knee injury. So far, Kanter has played one game for the Celtics, while the likes of Daniel Theis and Robert Williams have held down the center position. Kanter will ultimately return to provide offensive value but is better off a bench piece for Boston.

Signed last season on a one-year contract, Hezonja was a fun Knick. When he played, he gunned shots and looked for his offense. He yelled at a moping Kanter and we even received point Hezonja at the end of the season. For a team finishing with 65 losses, Hezonja was a fun player to have around without any drama.

Now, he sits on the bench an interesting role player for the Trail Blazers. He’s off to a slow start shooting the ball, but he’s already dabbled at three different positions, handles the ball in some situation, and still doesn’t play defense. Similar to Kornet, once Hez finds his shooting stroke, he could be fun for a Portland team who needs wings.

It certainly felt like the Knicks struck gold when they signed Noah Vonleh. For the first half of the 2018–19 season, Vonleh looked like an ideal stretch four and someone New York could dole out big money to keep. His second half, however, was a disaster. In the end, Vonleh decided to move on and the Knicks opted to sign several other forwards.

Another former Knick, another slow start. Vonleh is a backup center that largely plays at the basket. Zero three-point attempts are questionable, but it’s an early start. With Karl-Anthony Towns out for two games with a suspension, Vonleh should see some more minutes to prove himself.

The fear, however, is that Vonleh could see his minutes cut drastically as Jordan Bell returns. The combination of Bell and Towns could intrigue Ryan Saunders more, as Bell can cover for Towns on defense. For now, Vonleh will have to put some good performances to keep his role.

The New York Knicks have several added several players this past offseason, and as a result, several former Knicks have moved on to greener pastures. Of the five players mentioned above, none of them are on bad teams and even the 2-4 Bulls still feel like a chancy squad to reach the postseason in the weak Eastern Conference.

Ultimately, how their impact on their teams remains up in the air. Kornet and Hezonja are highly dependent on their offensive value, while Mudiay will have to continue maximizing his strength to avoid being replaced. Kanter feels like the only player solidified in his rotation, as Vonleh feels like the player most likely to lose his rotation spot.

Once a Knick, always a Knick. Hopefully, our guys will rebound from their slow starts to contribute to their new teams.

»READ: Could R.J. Barrett be the Knicks’ answer at point guard?