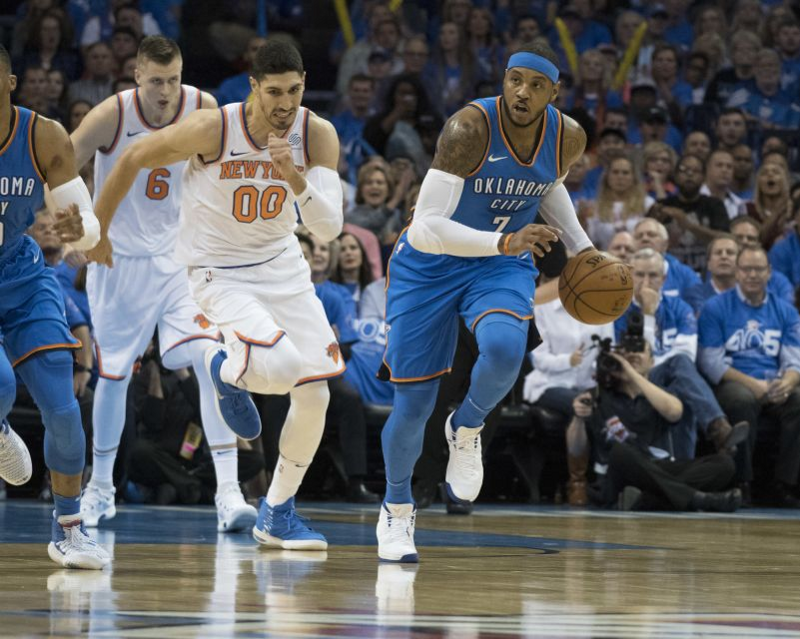 The Knicks opened the season with a marquee match up in Oklahoma City. How did the young guys fare against Russ and co.?

After a long and exciting offseason, real basketball was finally back on Thursday night. The Knicks looked good for most of the first half, before falling apart after the intermission.

Let’s take a look at a few things I found interesting.

When Scott Perry and Steve Mills finally found an acceptable trade for the Knicks and Carmelo Anthony, nobody expected it to be Oklahoma City. Well, it was. And when everybody checked their calendars to see when the Knicks would first face-off with the Thunder, it seemed like fate to find it would be on Opening Night.

Carmelo Anthony playing power forward, yes, power forward, against Kristaps Porzingis? It doesn’t get much better than that. Since there are plenty of highlights and articles available on Porzingis’ offense last night, let’s see how he fared defensively against ‘Melo.

When Ron Baker entered the game on Thursday, the Knicks were losing 17–12 and #KnicksTwitter was ready to explode because rookie Frank Ntilikina wasn’t the first guard off the bench. It didn’t help that Baker promptly turned over the ball on a lazy pass and then let Russ spin right around him on D.

But from that point, until Ntilikina replaced Baker early in the second quarter, the Knicks went on a 15–7 run to tie the game. Baker was a Swiss Army Knife of statistics during the run — accumulating one assist, one rebound, one steal, one foul, and one turnover.

A few key notes about this stretch:

Ron Baker didn’t play a great game on opening night. He was a turnover machine like the rest of the team. It was downright awkward watching him handle the ball on several possessions. After drafting a young point guard in a draft of elite point guards, it is justifiable for Knicks fans to be frustrated that they didn’t get to see more of their shiny new toy in Ntilikina.

However, there is a reason why the Knicks played their best last night with Ron Baker on the floor (+4 in 23 minutes). Part of it, an easy explanation, he had Kristaps Porzingis by his side. But so did the starters. And if you’re going to point to the difference in match ups, consider this: Baker with Hardaway Jr., McDermott, O’Quinn, and Porzingis shot 53.3 percent (8-of-15), compared to the starting lineup of Sessions, Lee, Hardaway Jr., Kanter, and Porzingis, which shot only 38.1 percent (8-of-21). The Knicks played better on defense with Baker on the floor (87.4 defensive rating), and some of that can be explained by the limited minutes against Russell Westbrook, but the Knicks were better offensively, too. Against several Thunder lineup iterations — we will learn during the season which ones are the best defensively — the Knicks were more efficient on offense with Baker on the floor than they were when he was on the bench.

Take a deep breath everyone. Again, this is not to say that Ron Baker is a superstar, or played like one last night. But give the guy a break. You might want to see Frank Ntilikia out there, we all do, but that doesn’t mean Baker played terribly last night, as I saw many commenting on social media.

My video breakdown focuses on Baker’s play in the first half, when the Knicks made a run to tie the game, and started a stretch where they played their best basketball of the night, mostly due to Kristaps Porzingis exceptional play. Baker played over 15 minutes in the second half, but the game was out of reach (72–51) by the time he checked-in late in the third quarter. While his play was consistent to the first half, I decided to focus on the portion of the game that mattered.

The video includes pretty much every play that Baker influenced, positively or negatively, during the first half run.

Spot-up shooting out of pick & roll

The Knicks shot 1–10 on spot-ups out of the pick & roll last night, and as the video above shows, part of the reason was the Knicks’ inability to orchestrate the first pass to the open shooter, combined with the Thunder’s effective defense. This wasn’t the only area where the Knicks struggled shooting the basketball. They were 5–22, overall, in spot-up situations, per Synergy data.

That does it for this week. Make sure to follow Knicks Film School for more videos. And tune back next week for another Knicks Film Study.