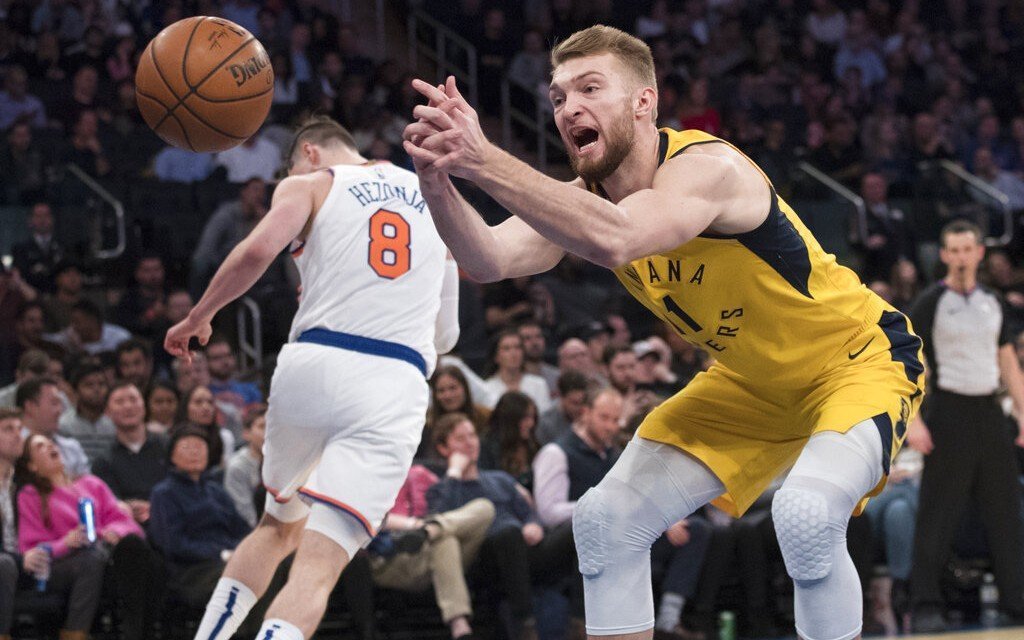 The Knicks were helpless to a Domantas Sabonis interior invasion and a Pacers frontcourt that dictated the momentum of another close loss for New York.

Domantas Sabonis is what you could call NBA royalty. His father Arvydas played with Portland for seven seasons, and before that had an illustrious career as the Spanish League’s MVP, as well as the preeminent FIBA adversary for the Soviet Union and Lithuania. His son, the aforementioned Domantas, attended Gonzaga University for two years before declaring for the NBA draft. Sabonis would later be traded to the Indiana Pacers in the Paul George deal that brought All-Star Victor Oladipo to the Hoosier state.

Despite coming off the bench, Sabonis logged 15 points and seven rebounds in seven minutes to begin Wednesday’s contest. He would finish the game with a career-tying point total, 30, on a perfect 12-of-12 from the field. No one on New York had a shot at slowing down the Lithuanian-American. Enes Kanter—now contributing to the team off the pine—was incapable of stopping the 6-11 Sabonis. Kanter finished with seven points and six rebounds on a ghastly 27 percent shooting night with four fouls. The Knicks were helpless in defending Indiana through timely screens, which also pitted guard Frank Ntilikina in the post against Sabonis. It wasn’t pretty, to tell the truth.

“In the pick-and-roll, [Coach McMillan] really emphasized being aggressive and going downhill—not settling for the mid-range jumper,” Sabonis said after his oozing performance.

That underscores the Knicks’ dramatic need for frontcourt depth. While the ‘Bockers start second-round selection Mitchell Robinson at center, the seven-footer has trouble communicating on defense in the pick-and-roll. Credit Pacers head coach Nate McMillan; Indiana buried the Knicks with purposeful ball movement and screens to force the home team into harmful mismatches—which found guards unsuccessfully fighting for positional victory against guys six inches taller than them.

New York’s failed interior presence exists behind the subtext of Kristaps Porzingis’ absence. Porzingis blocked 2.4 shots per game last season; the Knicks are blocking a rather ironic 2.4 blocks as a team in the 2018–19 season.

How do the Knicks make up for the Latvian’s missing, imposing ubiquity in the paint?

It begins with communicating with one another and finding ways to win closely contested ball games. “It wasn’t clicking,” Fizdale remarked after the game. “A lot of our stuff was inexperience…understanding how to focus in the moment.” Despite losing the rebound game 41-35, the Knicks were leading or slightly behind down the stretch in another tilt with a contending team.

New York failed to dish the ball, too. Isolation has made Enes Kanter feast or famine, and Noah Vonleh has been thrust into a distributive role as the starting power forward. “I feel comfortable [as a point forward]. … It’s been awhile since I’ve been able to get the rebound, push the ball.” The Knicks are Vonleh’s fourth team in his brief, five-year career. The 23-year-old’s rebounding has proved invaluable—he chipped in a 14-point, 10-rebound game on Wednesday night—but his passing chops haven’t gone unnoticed either. Four more assists versus Indiana were second on the team only behind starting point guard Ntilikina.

The frontcourt issues for the Knicks won’t resolve themselves, but there’s hope with Porzingis seemingly months away. More adept defense guarding screens would prevent rotational errors that find open wings on the perimeter. For now, Fizdale will have to settle with Vonleh, Robinson, and Kanter. “That’s everybody’s job, to echo [the play call] throughout the team, make sure everybody’s where they’re supposed to be.”

Until then, Coach Fizdale has close battles that stand as moral victories but poor execution down the stretch nonetheless.