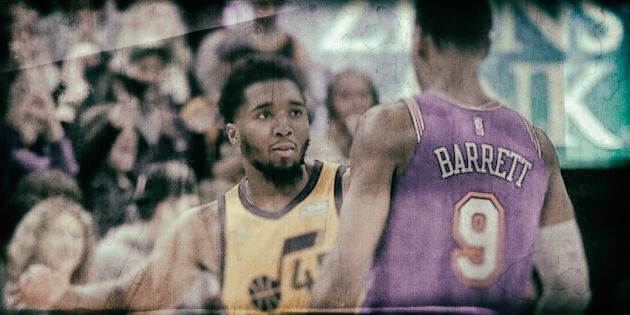 The Donovan Mitchell trade saga has been a game of smoke and mirrors. Knicks Wall beat writer Trey Rodriguez is here to help separate wheat from chaff.

Sooner than later, the game of chicken will end. The Utah Jazz will be among the forgotten teams of the Western Conference and the Garden will be rocking, with or without Donovan Mitchell. But probably with, right? One would think. Yet, with every passing day, depending on who you ask, people are either more certain or more restless.

This beautifully-written drama, beginning with the opening act of the Utah Jazz proclaiming to the world that they were absolutely intent on keeping Mitchell and building around him, was always going to end with Mitchell wearing blue and orange. At least, that has been the consensus around the league, according to various reports. But although the two sides have engaged in talks since as early as Summer League, Donovan Mitchell remains, for now, a member of the Utah Jazz.

In many ways, this Utah organization was always headed towards an implosion. Year after year, the Mitchell and Rudy Gobert-led experiment failed to impress. They were a good, sometimes great, regular-season team with less than stellar playoff appearances. Furthermore, the hiring of asset-hoarding Danny Ainge made the inevitable immediate.

Value is funky; the market sets it. It can be affected by salary cap increases, the latest players signed to max contracts, and the return on the latest players traded. When Rudy Gobert was traded for an absolutely absurd haul – three unprotected first-round picks (2023, 2025, 2027), one top-five protected first-round pick (2029), and a pick swap option in 2026 – Danny Ainge set the market for the 2022 offseason. If Gobert was worth four picks and a pick swap, surely Mitchell was worth the same, if not more.

That was the biggest question of the offseason for a while, until Kevin Durant brought the entire thing to a screeching halt. The market dictates value, and Durant’s value was far too high for any team to even match via trade; it’s why Brooklyn couldn’t possibly move him. Ironically, Durant remaining in Brooklyn, and proving to be way too valuable to move, is a great thing for New York. Ainge’s entire playbook in handling this Mitchell situation is based on the concept of leverage. The New York Knicks still want Donovan Mitchell, as they always have, and they have the biggest reserve of resources in the league. It’s a match made in heaven, so why not abuse it?

Donovan Mitchell was among the guys the #Knicks were interested. Dennis Smith, Jr. and Malik Monk, as previously noted. Impressive nevertheless.

Regardless of whatever tangible value Mitchell actually has, no other team in the league wants him and has an abundance of resources like the Knicks, and Ainge is doing his best to get as big of a return as possible. Mitchell’s preferred landing spot is New York, with Brooklyn or Miami as a backup plan, per a source with knowledge. However, Brooklyn is legally incapable of trading for Mitchell so long as Ben Simmons is on their roster, and Miami’s best tradeable asset is Tyler Herro, who will finish out his contract this upcoming season and expect to get paid after his 6th Man of the Year campaign last season. That incoming money is likely to dampen Ainge’s enthusiasm for the young guard.

The Knicks are simply the only real option, and not only due to being Mitchell’s top choice. When looking at potential trade suitors, only three teams stand out: Oklahoma City, Toronto, and Cleveland. The Thunder have the deepest asset treasure trove in the league, but they have shown zero interest in trading for Donovan Mitchell. The Toronto Raptors are another team with plenty of young assets who could take a swing at Mitchell, but they too have not been a team of interest.

This leaves the Cleveland Cavaliers, and boy does this get interesting here. The Cavs were indeed taking calls with Utah. They are among the teams “giving the Jazz options, outside of the Knicks.”

The Cavs have reportedly "touched based" with the Jazz regarding Donovan Mitchell in recent days, plus more from the East: https://t.co/KEIET2ZQOc

The truth is that Cleveland was simply doing their due diligence. If a star player is available, it doesn’t hurt to hear out your options. However, they are very confident in and comfortable with their young core moving forward. Any and all discussions with Cleveland were never serious. They know who their untouchable guys are, and they were never budging. Of course, Utah never had any real intention of making a deal with Cleveland because they simply do not have enough picks to even be in the conversation.

Again, it all comes down to leverage. The Knicks really want Mitchell, and the Jazz know this. And so, both sides have engaged in a summer-long game of chicken. The Jazz hope to pressure the Knicks into selling the farm, especially with “all of these other teams making offers,” and the Knicks hope to call their bluff and make the Jazz realize that nobody can offer what they can. The Cavaliers were merely a smokescreen, as has been any other team linked to the Jazz.

Anyone could figure this out. However, the Cavaliers even went out of their way to leak the information that they were officially out of the race. It’s something that doesn’t happen often. For that information to come out, it suggests that Ainge may be down to his final cards and the end is near. With leverage dwindling, the Jazz are intent on getting a deal done sooner than later according to new reports, and timing is everything.

Donovan Mitchell has patiently waited this thing out, while going on a majestic New York summer tour of irony, pettiness, and foreshadowing. However, training camp is less than a month away and it’s time to get to business. Many have wondered why the Elmsford native has not formally requested a trade. Perhaps it’s about perception and protecting his image. Perhaps it’s about pride. Who is to say? But what it would be is the absolute end to any semblance of Ainge’s leverage. A trade request would allow the Knicks to “lowball” the Jazz, relative to what they’re currently demanding, while still providing a better offer than they could get anywhere else.

The biggest obstacles stand as such: the Knicks refuse to give up too much young talent and the Jazz refuse to settle for protected picks. There is a middle ground to be reached. However, it’s very much believed that Mitchell’s patience may run out if a deal isn’t reached by training camp, per a source close to the situation.

Donovan Mitchell has a 15% trade kicker bonus in place; sources close to his camp believe he may be willing to waive his trade kicker if it helps smoothen out the process. #Knicks

We’re approaching the endgame. Durant is staying put with his incense-spreading partner. All eyes are back on the Jazz. The Donovan Mitchell trade is the final big domino that needs to fall this summer, for the Knicks to finalize their moves as they continue to negotiate RJ Barrett’s extension, weigh their options with Julius Randle, and even consider the idea of a reunion with Carmelo Anthony.

»Read: Grimes versus Quickley: who has more trade value?

»Read: Jalen Brunson and Donovan Mitchell could be trouble