Parting With Frank Ntilikina Might Be Best for Both Parties 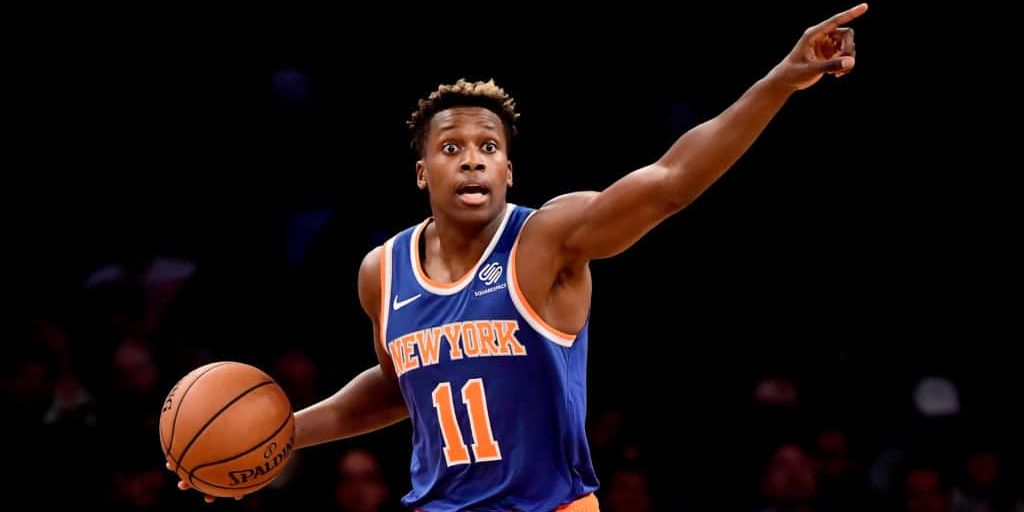 Trading Frank Ntilikina would be a bitter coda to the Frenchman’s Knicks career, but at this point what plan does the team have for the developing guard?

If you love someone, let them go.

Marc Berman of the New York Post reported that should Frank Ntilikina not impress in the final 10 games of the season, the Knicks could look to move him on draft night.

“If the Knicks don’t feel Ntilikina is developing into a potential starting point guard, they may trade him on draft night, especially with two-way G Leaguer Kadeem Allen showing promise,” Berman wrote.

This isn’t surprising, but it is pretty symbolic of the franchise’s expectations for the 20-year-old point guard. Ntilikina came into the league in 2017 with practically no offensive game to speak of. Alright, but he’s still one of the league’s youngest players, he’s got the frame and the instincts to be an elite defender, and above all else, he’s under team control until at least 2022.

Based on their track record regarding Ntilikina, the Knicks deciding what to do with him based on 10 games at the end of an injury-plagued second season is exactly what fans should have come to expect from the team. If the Knicks don’t see Ntilikina as either a primary ball handler, or a combo guard playing next to a dynamic scorer—cough cough Kyrie Irving cough cough—then it’s in everyone’s best interest to send Frank to a franchise that values him.

Ntilikina was rarely handed the keys to the offense, often coming in off the bench and playing a secondary ball-handler role, waiting for Trey Burke or Tim Hardaway Jr. to chuck up contested 19-footers. At some points it seemed like the Knicks were doing everything in their power to hamper his development, often pulling him for making mistakes other guards had been allowed to play through.

It was crucial to Ntilikina’s trajectory with the Knicks that he made offensive strides this season, but Mudiay—a free agent at season’s end—received the lion’s share of the minutes at point guard. Rather than allow him the opportunity to find a rhythm within the offense, New York relegated Ntilikina to standing in the corner.

In fairness, Ntilikina looked lost on offense for most of his second season, but it seemed like after every step forward he managed to take, there was something else to push him backwards, whether it be an ill-timed injury or an unexplained reduction in minutes.

Earlier this week, Stefan Bondy of the Daily News reported that the team had approached the Atlanta Hawks, inquiring about their interest in acquiring the point guard before the trade deadline this season. This report affirms that despite investing the eighth-overall pick in the draft in Ntilikina fewer than two years ago, the Knicks aren’t interested in keeping him around long term.

Ntilikina does have a long way to go, but he’s still four months from even turning 21, and if the reports are to be believed, there are several teams interested in acquiring him. The Orlando Magic, Phoenix Suns and Memphis Grizzlies all reportedly expressed interest in Ntilikina.

Orlando instead traded for another embattled point guard from the 2017 draft class, Markelle Fultz. Phoenix signed Jimmer Fredette on Thursday, and the Grizzlies traded Marc Gasol and subsequently tumbled down the standings. However, none of these teams would decide to keep or move Ntilikina based on a 10-game sample after missing nearly a month with a groin injury.

Additionally, playing in any of those three markets would lessen the spotlight and allow the Frenchman to develop without the New York media breathing down his neck. Nearly any other market would provide a reprieve. The Knicks are clearly focusing their attention elsewhere and should send Ntilikina to a team that values his defensive abilities and believe they can help him reach his offensive ceiling.

A late first-round pick for the player you took with the eighth pick two years ago isn’t an efficient use of assets, but it’s likely the best the team can hope for—unless Ntilikina strings together the best stretch of his young career to close the season. If the franchise views him as a sunk cost already, then it’s in the interests of both sides to find somewhere the point guard can start over with fresh slate.

»READ: How can Dennis Smith Jr. reach his potential in New York?