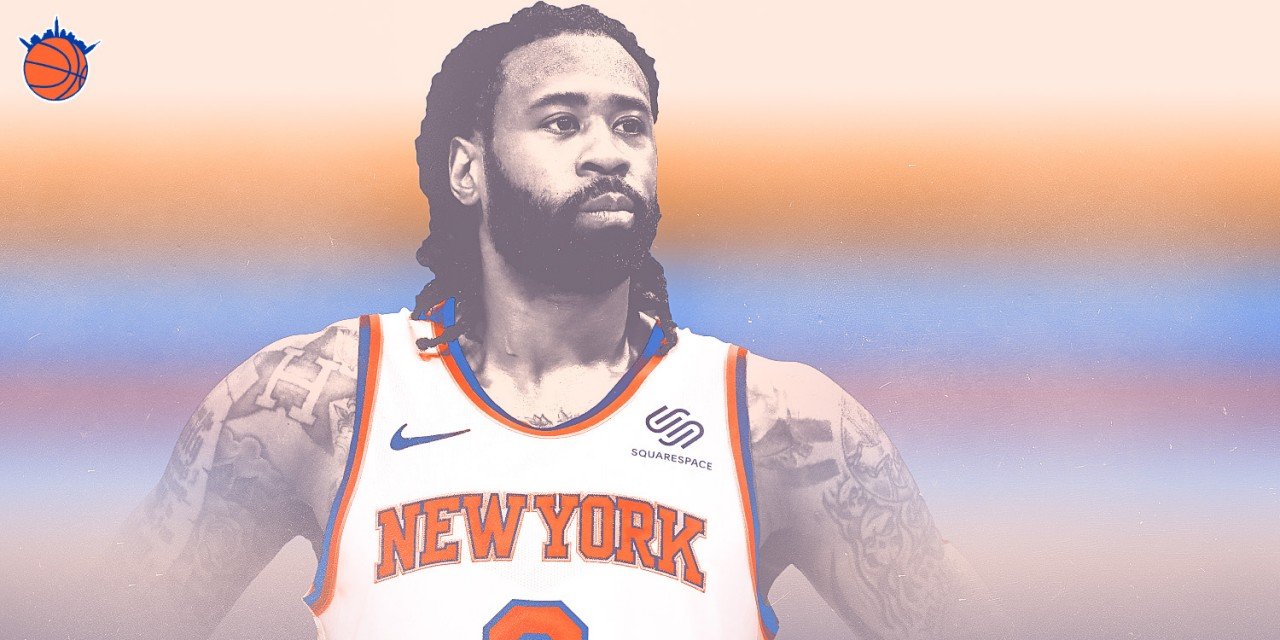 In his 11th season, big man DeAndre Jordan has added something unexpected—and much needed—to the Knicks’ offense: passing.

When the Knicks opted to keep veteran center DeAndre Jordan ahead of the March deadline for playoff-eligible waiver cuts, they had a certain role for the former All-NBA first-teamer in mind—to serve as a mentor to rising star Mitchell Robinson, while providing a voice on defense and in the New York’s locker room. For Robinson in particular, Jordan couldn’t have served as a better template; he’s made a living off of throwing down lobs, blocking shots, and serving as a rock-solid anchor on defense.

The Knicks might not have realized that they were getting another component to the team that they, for the most part, severely lacked all season—a playmaker in the halfcourt.

Jordan’s biggest surprise has been his ability to pass out of the high post, something he wasn’t necessarily asked to do much on the Clippers with Chris Paul and fellow playmaking big Blake Griffin, or with the Mavericks, where sensational rookie Luka Doncic was running the show.

As anyone who has managed to stomach watching the Knicks play over the second half of the season can tell you, Jordan has been an adept passer since coming to New York in the blockbuster Kristaps Porzingis trade.

Jordan’s numbers aren’t those of someone who makes players better considering he’s averaged a paltry 0.9 assists for his career. But for a player whose role was to touch the ball as little as possible for the majority of his time in the league, those numbers should be taken with a grain of salt.

DeAndre Jordan’s assist numbers on the Knicks remain an outlier in a career built on defense and rebounding. Since his first game in New York, DeAndre has averaged 2.9 assists per game—a figure that would currently rank eighth in the NBA amongst qualified NBA centers for the year.

In total, Jordan is averaging 2.2 assists per game (2.9 with the Knicks, 1.9 with the Mavericks)—good for 10 among qualifying centers, just behind Miami’s Bam Adebayo (2.3). Jordan has also played almost five minutes fewer per game on the Knicks than he did with Dallas—26.3 compared to 31.1 with the Mavericks—yet he assists at a higher clip.

His improvement this season as a whole is noteworthy. Jordan ranks in the top third in the league in assists per game among centers, something he hasn’t come close to doing since coming into the league with the Clippers back in 2008. That year in particular, he averaged 0.2 assists per game; a figure that speaks volumes for a player’s progression in year 11.

While observers mostly look at his improvement from the free throw line, it’s apparent Jordan has also made great strides from an overall basketball I.Q. standpoint.

While Jordan averages fewer minutes and fewer points with the Knicks, there is no doubt that Fiz’s offense opens up opportunities for Jordan he hasn’t seen in the past.

When the ball is brought up the court by the Knicks’ point guard, the first action in many instances involves an entry pass to DeAndre (or whichever center is in at the time) at the top of the key. The big fella then has two options—hand the ball off to a cutting player on the wing, or find a cutter on the backdoor.

The handoff is the safer choice. From there, he can unlock the high pick-and-roll, or at the very least, create a screen assist opportunity and get himself in position for an offensive rebound. This is, for the most part, is what Jordan opts to do. But that’s not to say it’s the only thing he does.

Jordan has been particularly adept at the latter—finding backdoor cutters when the play is there. Even before New York, Jordan showed an improved ability to find cutters. Back in October, he put up a career-high nine assists against the Utah Jazz. Below, in a clip from that game, Jordan threaded the needle for a perfect bounce-pass to ex-Knick-for-two-games Wesley Matthews for an and-one bucket.

Threading the needle for one of DeAndre Jordan's career-high 9 assists! #MFFL #KiaTipOff18 pic.twitter.com/NTYKcKjcm2

Jordan has already managed to tie his newly acquired career high in New York, despite playing in just 18 contests with the Knicks. He did it during a March 15th shellacking from the San Antonio Spurs, where rookie Mitch Robinson struggled, and Jordan saw a little over 30 minutes of playing time. He finished that contest with 11 points, 13 boards, and nine assists, one shy of completing a career-first triple-double.

That game was also sandwiched between a five-assist game against the Pacers and a seven-assist game in the Knicks’ last victory against a similarly-fledging Lakers squad.

Those three games had one thing in common: Jordan played more than 30 minutes in each of them. When Jordan is able to get in a groove, he’s shown he can be a well-rounded player as a screen-and-roller and passer from the high post.

Can it Rub off on Mitchell Robinson?

Jordan’s passing gives the Knicks’ offense some much-needed versatility. While Robinson has been far and away the better defender, he’s mostly a one-trick pony on offense. He’s certainly one of the best lob threats in the league—better than even Jordan was as a rookie—but more and more, teams are making a concerted effort to take that play away when Lobinson is on the court.

Jordan, to an extent, changes that dynamic. While he certainly isn’t a fearsome floor spacer from the five, DJ has the ability to thread the needle on cuts to the rim and find open three-point shooters, giving the Knicks a few extra wrinkles on offense.

At the very least, it opens up things for the Knicks’ backcourt players.

For Mitchell Robinson to unlock this full potential as a player, he’s going to have to become more versatile on offense. Judging by his marked improvement this year, that doesn’t appear to be a tall order. He and Coach Fiz have talked about improving his face-up game and shot from behind the arc, but playing a more cerebral game, like Jordan’s, can also add another dimension to Robinson’s burgeoning all-around game.

Watching Jordan, someone who managed to do it in his 11th season, is certainly a good place to start.

All stats courtesy of NBA.com

»READ: No, the Knicks should not re-sign DeAndre Jordan