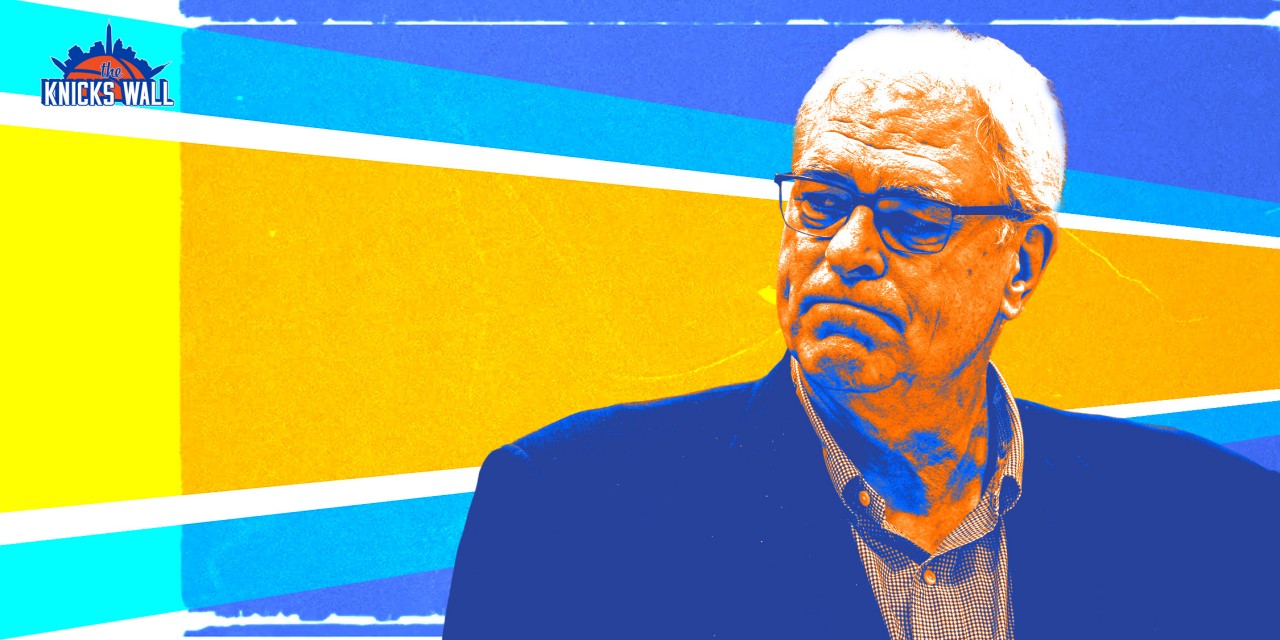 With the Knicks closer than ever to the playoffs, Phil Jackson’s recent media hiccup reminds us of the mistakes during his tenure.

In The Jordan Rules, the seminal 1991 book by Sam Smith about the 1990–91 Chicago Bulls, Phil Jackson is painted as somebody who disagrees with Jerry Krause, the general manager, on the team’s roster. Smith writes about Jackson: “But Jackson was lobbying hard for [Cliff] Levingston. He believed Levingston, though only about 6-7, would help on defense and rebounding and fit well into the open-court style of basketball Jackson felt the Bulls had to play. Krause was resisting, saying Hopson would do as a backup small forward. Jackson believed otherwise, and he was now getting additional pressure from the assistant coaches.” Around that time in his basketball life, Jackson was hesitant to get into a beef with his general manager because of Krause’s infamous prickly attitude. Eventually, Jackson won out and signed Levingston. That was the Bulls in a nutshell: They fought, but they always came out making the correct decision in the end.

In The Last Dance, Jason Hehir’s ESPN documentary mini-series on the Jordan era, it is said that while Krause discovered Jackson’s innovative coaching mind and ability to connect with players, their relationship soured at the end because of ego.

I say all of this, not to give you ancient history, because well, the Chicago Bulls stink now, but because it is an interesting backstory to who Phil Jackson was as a basketball executive. In a lot of ways, Jackson became Krause: feuding with players openly about their play, getting into public bickering with his star, and having a stubbornness that is only fit for someone who is winning 55 games a year.

The only problem was, the Knicks weren’t winning. Jackson was 80-166 as an executive of our beloved Knickerbockers. At first, it started off hopeful. Jackson’s introductory press conference was solid. He can be an interesting orator, in his raspy Montanan voice, and he said that he wanted the team to have a relationship with the media that was informative. He wanted to bring back the Knicks to relevancy.

One of Jackson’s first moves was re-signing star forward Carmelo Anthony, a move that at the time, had to happen. Anthony wanted to come back and make things right in New York, an admirable choice on his part. However, ‘Melo had just finished the last season of his peak. He shot 40% from downtown in 2013–14. The next season he shot 34.1% and chose to have knee surgery after the All-Star break. J.R. Smith and Iman Shumpert became dissatisfied quickly after Jackson had dropped interviews with his media buddy and glorified PR person, Charley Rosen, about the team. They were shipped off to Cleveland to hang out with LeBron James (J.R. became an NBA Finals hero!).

Derek Fisher was hired over the summer after Jackson had missed out on his first choice, Steve Kerr, and was fired a year later after his argument with Matt Barnes became too much of a cloud hanging over him. (In fairness to Fish, he had the Knicks playing well until ‘Melo sprained his ankle.)

Jackson’s adamance for the Triangle Offense to be a part of the culture of the Knicks was a problem. He went from a coach that knew how to cater to the players while having his philosophy to a grumpy executive that forced his dated offense on the players. Anthony definitely was stubborn as well, and never gave it much of a chance, but a Triangle only works if you have the talent to develop it, like Jackson’s Bulls and Lakers teams. After Fisher was fired in the middle of the 2015–16 season, Kurt Rambis, the errand man, was hired to bring the order of the Triangle to the team. It went exactly as you expected it to go; the Knicks had a second-half swoon and missed the playoffs. That wasn’t the move that got Jackson canned, though.

Let’s rewind. In the 2015 NBA Draft, the Knicks picked fourth. Four is an interesting position in the draft. Usually, people have an idea of the three going before the fourth. The fourth is usually somewhat of a wild card. It can go either way: Russell Westbrook was the fourth pick in his draft. Or, sometimes you get Wesley Johnson. The Knicks loved Ohio State guard D’Angelo Russell, but Phil’s ex, the Lakers, scooped him up with the second pick. Jackson went a controversial route. He selected unknown Latvian prospect Kristaps Porzingis with the top-five pick.

Porzingis, a seven-foot lanky talent with range, was hyped up from the beginning of his rookie season. Knicks fans are ever quick to anoint players that start off strong. Regardless, Porzingis showed us the innate talent that he had. But, something was always missing. His brothers, who are his agents, always had this dark and eerie manipulation over them, like they were backed by the Russian mob and Porzingis was their front. Porzingis always seemed to run out of gas in the second half of the season. For a decent three-point shooter, his free throw percentage was not good. For a 7’0” player, he never wanted to bang and openly rebelled at playing the five spot, a position that is good for him because of the mismatches that it can create. He seemed to be copying off of Anthony too much; he went from spread the floor to playing ISO ball. Unlike ‘Melo, his game is not sauced enough.

In fairness to Jackson, he was right on Porzingis. His attitude is poor; as evidenced by him also feuding with the Dallas Mavericks front office now. He doesn’t come from good stock. Maybe we should have dealt with him. Rumor has it that Jackson had shopped him to the Boston Celtics for Jaylen Brown, who is now a top player in the NBA. Jackson flirted with the idea of trading Porzingis after KP skipped exit meetings, with rumors being that Porzingis was upset about the direction that the team was headed. That led to Jackson now feuding with Carmelo and Porzingis, one would have been fine, but New Yorkers had attached themselves to both. Jackson lost favor within the fanbase; we wondered whether the game had passed the crotchety Hall of Famer. Not only was the team not winning, but Anthony was also openly mocking Jackson. He was audaciously pushing him to do something about him, too.

In the end, like Tony Soprano, the city had enough of Jackson’s California bullshit. He was dismissed as team president on June 27th, 2017. The Zen Master had gone from Hall of Fame to a general laughing stock.

Jackson recently appeared on a podcast with former player Coby Karl discussing the Knicks and the ex-New York executive’s tenure. He said, “Carmelo, I think, wanted to be a leader, but I don’t think he completely knew how to be a leader as a player. And I think that the strength of his personality was intimidating to some of the coaches that were asked to coach the team.” This is not a slanderous quote, it is something that makes sense, but it again transfers blame to ‘Melo for a team that was not well thought out, and should not have run the Triangle.

It reminds me of Jerry Krause—the need to have something over the players. The need to have it done your way or you don’t think you’ll get enough credit. That’s not why you should become a general manager, though.

»READ: Where does Carmelo Anthony rank in Knicks history?