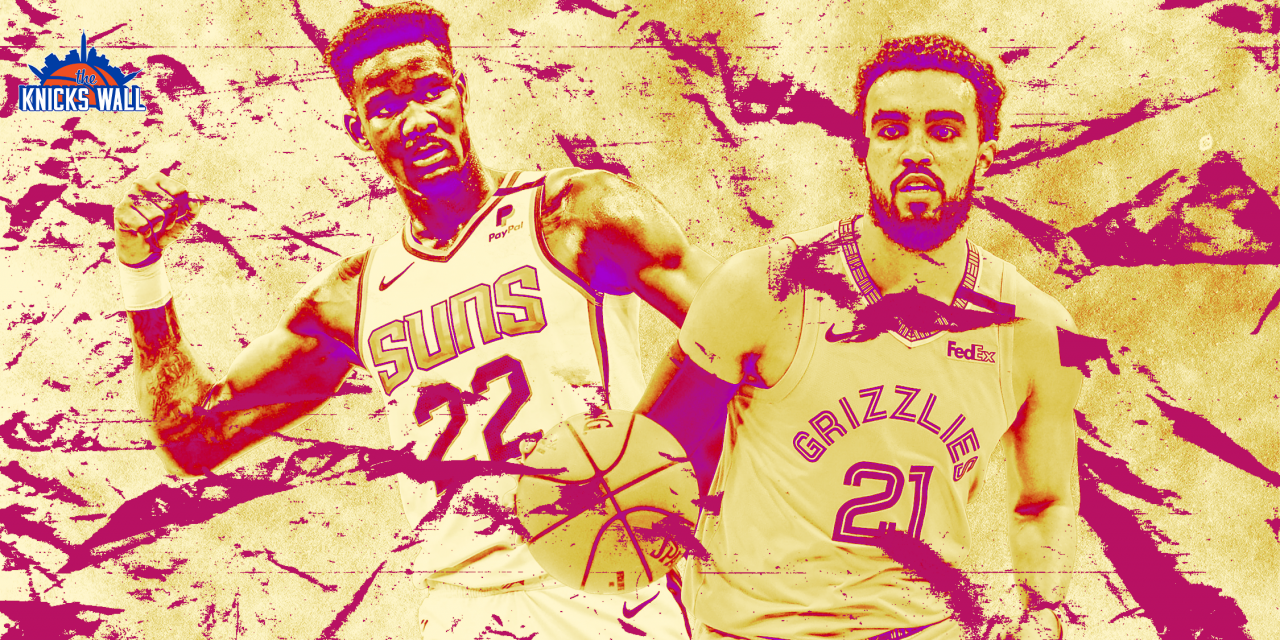 Donovan Mitchell and D’Angelo Russell may be grabbing headlines as Knicks offseason targets, but they’re far from the only ones. With their teams out of the playoffs, the Knicks may look to Deandre Ayton, Tyus Jones, and De’Anthony Melton to improve their roster.

Only four teams remain in the hunt for the 2022 title. Conference Finals teams usually have very few weaknesses—thanks to a combination of superstar talent (Stephen Curry, Jayson Tatum, Luka Doncic, etc.) and depth. Even teams that lose at this stage may look to run it back with near-identical rosters in 2022–23. Fortunately, there are excellent players on already-eliminated teams the New York Knicks can look to as potential trade and free-agent targets.

Big names like D’Angelo Rusell and Donovan Mitchell have already been linked to the Knicks. While these rumors aren’t going anywhere, three other players—one point guard, one combo guard, and one big—from recently knocked-out playoff teams could plug some holes and propel the Knicks back to the playoffs:

Seldom in league history has a former number-one overall pick (who is also good) been legitimately available via restricted free agency after their rookie contract. Ayton may be one of them. Following the Suns’ Game 7 meltdown against the Mavericks, ESPN’s Adrian Wojnarowski noted Ayton “did not feel valued by the Phoenix organization.” He played only 17 minutes in the blowout and was benched the entire second half.

Reportedly, Ayton’s resentment stems from the fact that the Suns were unwilling to offer him a max deal in October, which Wojnarowski says the big man should receive “in the marketplace.” To avoid losing Ayton for nothing, the Suns may explore a sign-and-trade. In that scenario, the Knicks should do all they can to acquire him without sacrificing one of their young stars (RJ Barrett or Obi Toppin). Mitchell Robinson, who is also due for a new contract, and Jericho Sims are rock-solid bigs who will only get better. But, as an All-Star-caliber talent at 23 years of age, Ayton is on another wavelength.

Last season, Ayton ranked ninth among centers in scoring (17.2 points per game). The former University of Arizona standout significantly changed his game last season. Once a rim-oriented big, Ayton operated farther from the basket than in years past, making the mid-range shot his bread and butter.

When factoring in his usage rate and accuracy, Ayton may have been the best mid-range shooting center in 2021–22. More than half of Ayton’s total field-goal attempts, 55%, came from the in-between area. That put him in the top 1% in frequency among all classified bigs, behind only mid-range master LaMarcus Aldridge and Robin Lopez (who played just 36 games).

More importantly, Ayton was also precise. He found nylon on a staggering 56% of his mid-range attempts this season (94th percentile per Cleaning the Glass). While Ayton hasn’t yet developed a shot behind the three-point line, his elite ability to knock down jumpers inside the arc would be a breath of fresh air for a New York team whose behemoths struggle to stretch the floor.

Stop me if this sounds familiar: there is uncertainty surrounding who will start at point guard for the Knicks next season. For the last decade, the ‘Bockers have scoured high and low for a reliable floor general with little success. Names like Dennis Smith Jr., Frank Ntilikina, and Langston Galloway all took turns at the starting helm, but none panned out. Alec Burks spent 44 games in the role last season and clearly wasn’t comfortable. Thankfully, there will be a point guard in the open market who can provide the steady playmaking hand the Knicks have been searching for: Tyus Jones.

The Memphis Grizzlies backup is an upper-echelon facilitator. Firstly, Jones takes care of the ball like a newborn; he committed just 0.6 turnovers per game while averaging 21.2 minutes. According to Cleaning the Glass, Jones notched a career-low turnover percentage of 6.5% in 2021–22 (97th percentile among combo guards). He leads the offense with poise and composure, rarely allowing defenses to rush him.

Along with excellent ball control statistics, Jones also put up impressive assist numbers that justify his place among the NBA’s top dimers. Among combo guards, Jones had a 93rd percentile assist to usage rate, a Cleaning the Glass statistic measuring how many assists a player gets relative to their time with the ball. Not only that, Jones’ assist percentage—the percentage of his teammates’ made shots he assisted on—was almost just as exemplary at 28.5% (89th percentile). Jones can create scoring chances for his teammates in various forms, whether as a pick-and-roll ball-handler (0.76 points per possession) or a break-starter (79th percentile in transition frequency).

What a beautiful pass from Tyus Jones pic.twitter.com/rVB3ojdnqs

Finally, Jones played for coach Tom Thibodeau during their time with the Minnesota Timberwolves. The Knicks need to clear up some cap room to throw Jones a legitimate offer—likely a $10.2 million mid-level exception—but a reunion makes sense for both sides. Jones would get an opportunity to start, and Thibs, an unselfish point guard already familiar with his modus operandi.

New York’s shortage of impactful perimeter defenders stood out like 7’0″ Mitchell Robinson at a kid’s birthday party throughout the season. The Knicks allowed 37 three-point attempts per game—the seventh-most in basketball. The ‘Bockers struggled without Reggie Bullock, who left for the Mavericks in free agency and often guarded the other team’s best player.

There was a time early this season when RJ Barrett seemed ready to become a lockdown wing defender, but he remained inconsistent on defense, as almost all youngsters are. If the Knicks want to rekindle their defense-first identity from 2020–21, it starts with finding a top-notch perimeter irritant.

Enter De’Anthony Melton, a four-year pro out of USC who has staked his claim as one of the most disruptive perimeter defenders, playing positions 1-3 last season per Cleaning the Glass. Though a bit undersized at 6’2″, he defends at a high level, hounding guards on the perimeter, picking off passes in mid-air like a cornerback, and swiping down on the ball for strips. He boasted an outstanding 2.5% steal percentage on the year (95th percentile among combo guards).

Good to see De'Anthony Melton back in the mix doing his thing — 14 points, 3 three's, 7 rebounds, 3 steals, 1 block. He was pivotal in turning defense into offense. Liked how he jumped into the passing lane to generate 1v1 transition offense pic.twitter.com/LfZzyYkqwQ

With a 1.1% shot block percentage (97th percentile), Melton is among the best pound-for-pound shot-blockers in the NBA. Only one other combo guard Melton’s height or shorter posted a higher block percentage in 2021–22: 6’1″ Patrick Beverley. Perhaps Melton’s block of the season came in Game 1 of the conference semi-finals. He swatted a Stephen Curry scoop-layup and parlayed it into a fast-break score for Memphis:

Big momentum play here, Anderson with excellent defense on Curry, Melton comes over for the block and leads the break finding Morant for the lob. pic.twitter.com/yfNnJYPJjK

Besides being a wonderfully effective defensive player, Melton’s contract also makes him an attractive trade target. More specifically, how affordable it is. Melton will make just $16.25 million over the next two seasons before his contract expires in the summer of 2024. For a starter-caliber player, that’s a heck of a bargain, especially when factoring in his capable three-point jumper (he shot 37.4% from three on 5.1 attempts).

Though three different players, Ayton, Jones, and Melton would each give the Knicks meaningful minutes. Acquiring fresh faces from recently defeated playoff teams could eliminate any bad taste fans, players, and staff still have in their mouths from the hapless 2021–22 campaign.

»READ: D’Angelo Russell may not be the correct, short-term fix