David Fizdale’s likely point guards all possess the “former lottery pick” title but neither has been able to elevate to something more. Let’s breakdown the roster’s lead guards.

Much of the focus surrounding the 2018–19 New York Knicks has been about the team’s needed rebuild under new head coach David Fizdale, team president Steve Mills, and general manager Scott Perry. While franchise cornerstone Kristaps Porzingis continues to rehab a torn ACL, Knicks fans and pundits alike have the chance to closely evaluate some of the surrounding talent on the team, including first-round pick Kevin Knox and fellow rookie Mitchell Robinson, a seven-foot second-round draft pick poised to cement his status as the steal of this year’s draft.

While on paper the Knicks boast three former lottery-pick point guards, the position group is far from a sure-fire thing. In fact, one can argue it’s the biggest question mark heading into the season (other than the up-in-the-air status of our beloved Unicorn, of course). There is no single favorite to start at the moment, and it wouldn’t be crazy to suggest the Knicks’ future at the position isn’t even on the roster yet. However, that notion could change in a split-second, depending on whether or not somebody separates themselves from the pack this upcoming year.

So let’s take a look at some of the Knicks’ option to start at the point this season—a campaign mostly pointing toward the future of the franchise.

Trey Burke, arguably the favorite to start at point guard this season, had himself a career-resurgence of sorts last year with the Knicks. Particularly, when he was given the chance to start.

In the nine games Burke started last season, the former Michigan alum posted averages of 18.7 points, 7.7 assists, 2.3 rebounds and 1.2 steals on 48 percent shooting (per NBA Stats). On the season, Burke averaged 12.8 points and 4.7 assists per game.

In other words—Burke ain’t no scrub. It’s clear he wasn’t NBA-ready at the tender age of 19—both maturity-wise and physically, but it looks like the ex-lottery pick has rekindled some of the magic that made him a top-10 pick in the first place.

For what it’s worth, Fizdale went with Burke has his starter in the first preseason game. While Burke’s small frame doesn’t make him the ideal fit for Fizdale’s “position-less” offense, his lack of versatility might actually give him an advantage to crack the starting lineup. Since he almost exclusively plays the point guard position, he’s a lot more difficult to sub into the Knicks lineup. Realistically, he can only come off of the bench and guard 1’s. However, if Fizdale starts Burke, he can leave a much more position-flexible guard on the bench like Frank Ntilikina or Emmanuel Mudiay, who are both bigger and can sub in at the 1, 2, or in Frank’s case, even the 3. Guys like Mario Hezonja, Damyean Dotson, and Courtney Lee also remain far more position-flexible than the 6’0″ Burke.

With this philosophy, in conjunction with Burke’s superb second-half last season, he could be the frontrunner for the starting point guard position going forward.

If Burke isn’t the starter next season, my money would be on Emmanuel Mudiay to crack the starting lineup. The Knicks acquired Mudiay last season at the trade deadline with the hopes that he could show some flashes of the player picked seventh overall in the 2015 draft.

Head coach David Fizdale actually spoke very highly of Mudiay when the Knicks’ made the trade for the former lotto pick, and he’s continued to be complimentary of the player going into this season. Per Fizdale, Mudiay has dropped some weight, and his jumper has apparently been much-improved.

In the first preseason game, however, Mudiay continued to show a startling trait he’s displayed since entering the league—the inability to finish around the rim.

Last year, Mudiay looked explosive getting to the rim, but often failed to actually convert the bucket when he got there. By March of last season, Mudiay shot a pitiful 29 percent off of drives, despite leading the Knicks in getting into the painted area. This eventually led to his demotion, ceding the way to Burke-sanity (if you want to call it that).

Mudiay shot 37.7 percent on 3.5 field goal attempts in 9.5 drives per game for the Knicks during his 22-game tenure as a ‘Bocker last season following the trade-deadline acquisition (NBA Stats/Second Spectrum).

Apparently, however, coach Fizdale has made a concerted effort to focus on finishing—not only for Mudiay, but for the team in general. You can see him running some finishing drills in a practice from last week below.

Catch Frank & Trey working on their floaters. Fizdale puts major emphasis on finishing around the rim. Something they including Mudiay could all learn to do! pic.twitter.com/wyddj0J9rp

If Mudiay can clean up some of the issues that have plagued him thus far in his NBA career (jump shooting, finishing at the rim, and defense), he could become the ideal point guard for David Fizdale. He’s the best penetrator on the team, and his size at 6’5″ makes him an intriguing candidate to handle the ball in coach Fiz’s position-less lineups. However, it remains to be seen if his actual exploits on the court will ever match his physical potential.

Frank Ntilikina is an intriguing prospect, mostly because he’s one of the rare point-guard draftees that are NBA-ready on the defensive side of the ball, yet look completely raw on offense.

Ntilikina has already cemented himself as one of the best on-ball defenders in the NBA. According to NBA Stats, Frank was one of the NBA’s best in opposing field-goal percentage against the pick-and-roll. His 6-5 (now, possibly 6-5) height, coupled with his 7’1″ wingspan, has given him the positional flexibility to switch on a whim—something David Fizdale looks for on defense, the importance of which cannot be understated in today’s pace-and-space league.

Frank Ntilikina's rookie highlights:
???
I don't know how you can't root for this kid. He led the NBA in PnR defense, has amazing court vision, has a smooth jump shot, is 6'5 with the athletic versatility to defend literally almost everyone, and is only 19 FREAKING YEARS OLD. pic.twitter.com/Vq6kvUJwFP

However, Ntilikina tends to struggle on offense with penetration. His jump shot looks like it has promise, but he’s shown a hesitancy to get into the paint—something the other two point guards excel at. Simply put, he lacks the ball-handling skills required of an NBA point guard. Frankie was brought onto the team for his fit in the Triangle Offense, which usually forces their lead guards to play mostly off the ball. In fact, a point guard in the Triangle operates more like a shooting guard in today’s NBA, with a focus on spot-up shooting in the corner and cuts to the basket.

For the Knicks, the raw Ntilikina can play the Marcus Smart role in Boston. He can come off the bench, and instantly guard essentially any player from the 1-4. The only difference is Frank has the more desirable physical skill set and size. Not to mention a much smoother-looking jumper. Smart defends on mostly intelligence and grit, while Ntilikina has all the natural tools you’d like to see in your defensive stopper. That’s not saying Frank’s I.Q. is lacking, but the now-20- year-old can certainly benefit from some additional NBA experience. He’s sure to get it under Fizdale, who clearly isn’t afraid to throw some of his younger players into the fire early on.

Whether or not Ntilikina can ever become a pure point guard is anyone’s guess. He might project as a 3-and-D combo guard for the time being, but in today’s position-less NBA, that’s hardly a bad thing.

Why the question mark, you ask? Well, because it’s fair to wonder whether or not Fizdale envisions Baker as a true lead guard or not.

Baker, like Ntilikina, certainly lacks in the handles department. He’s not great at getting into the paint, either, and his jump shot is leaky. However, he plays hard, and he’s a more than willing defender. Just ask Anthony Davis. Or a hospital staff.

Still, it’s unlikely Baker gets much burn at point guard this season. With guys like Mario Hezonja and Kevin Knox receiving some opportunities as point-forwards, Baker could see some action as more of an off-ball, secondary ball-handler with the second unit. But due to the emergence of undrafted guard Allonzo Trier, who could very well earn himself a guaranteed roster spot, and Daymean Dotson, a more polished 3-and-D 2 guard, minutes could be few and far in between for Ron Burgandy.

For all intents and purposes, playing Baker at the point guard position could spell disaster for the Knicks. But playing him a few minutes at the 1 could work out, especially if Frank is in foul trouble and our other guards are getting torched on defense. However, don’t be surprised if Baker is inactive for the majority of this season, barring some kind of major injury to the Knicks’ stable of guards. 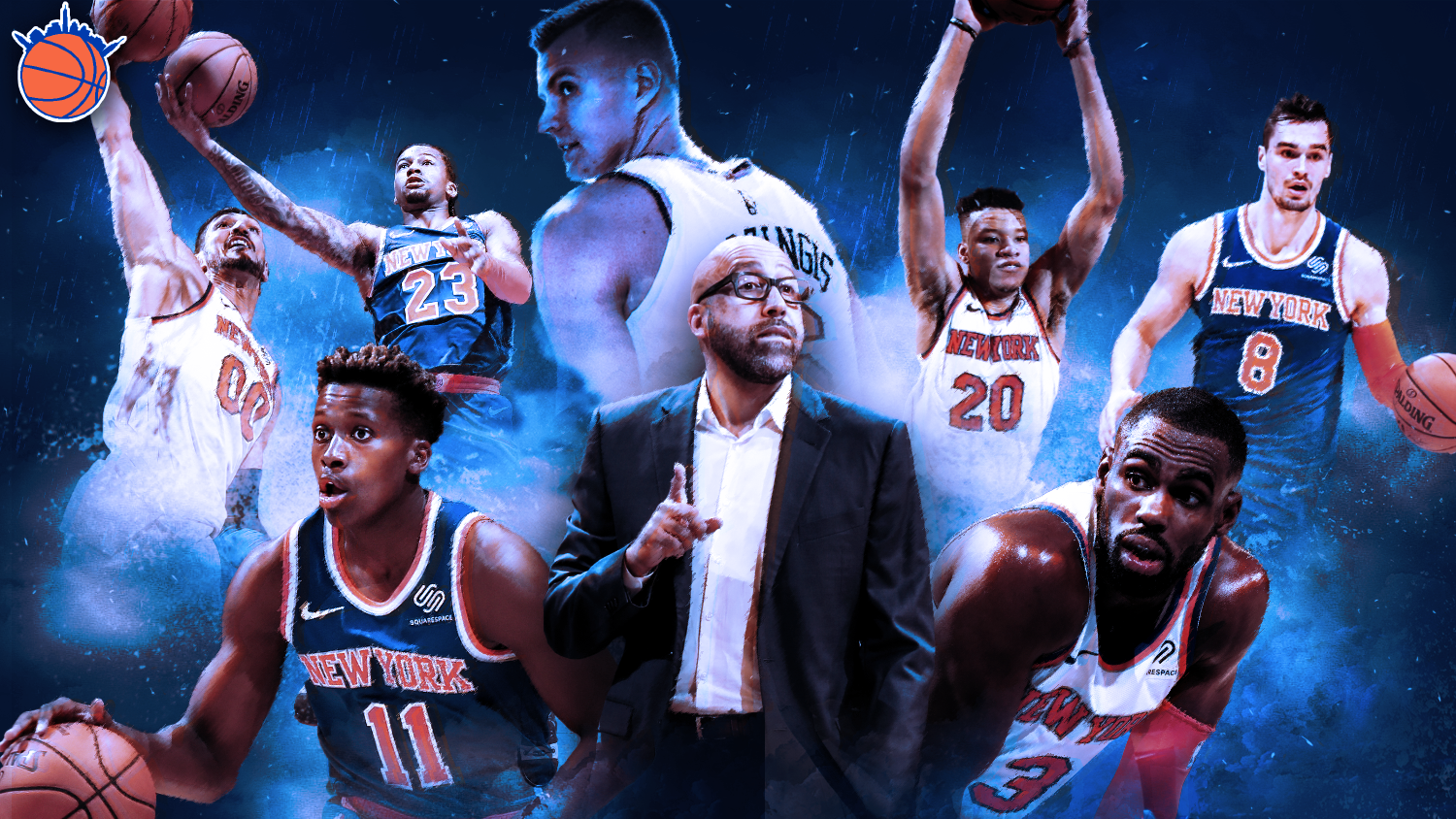 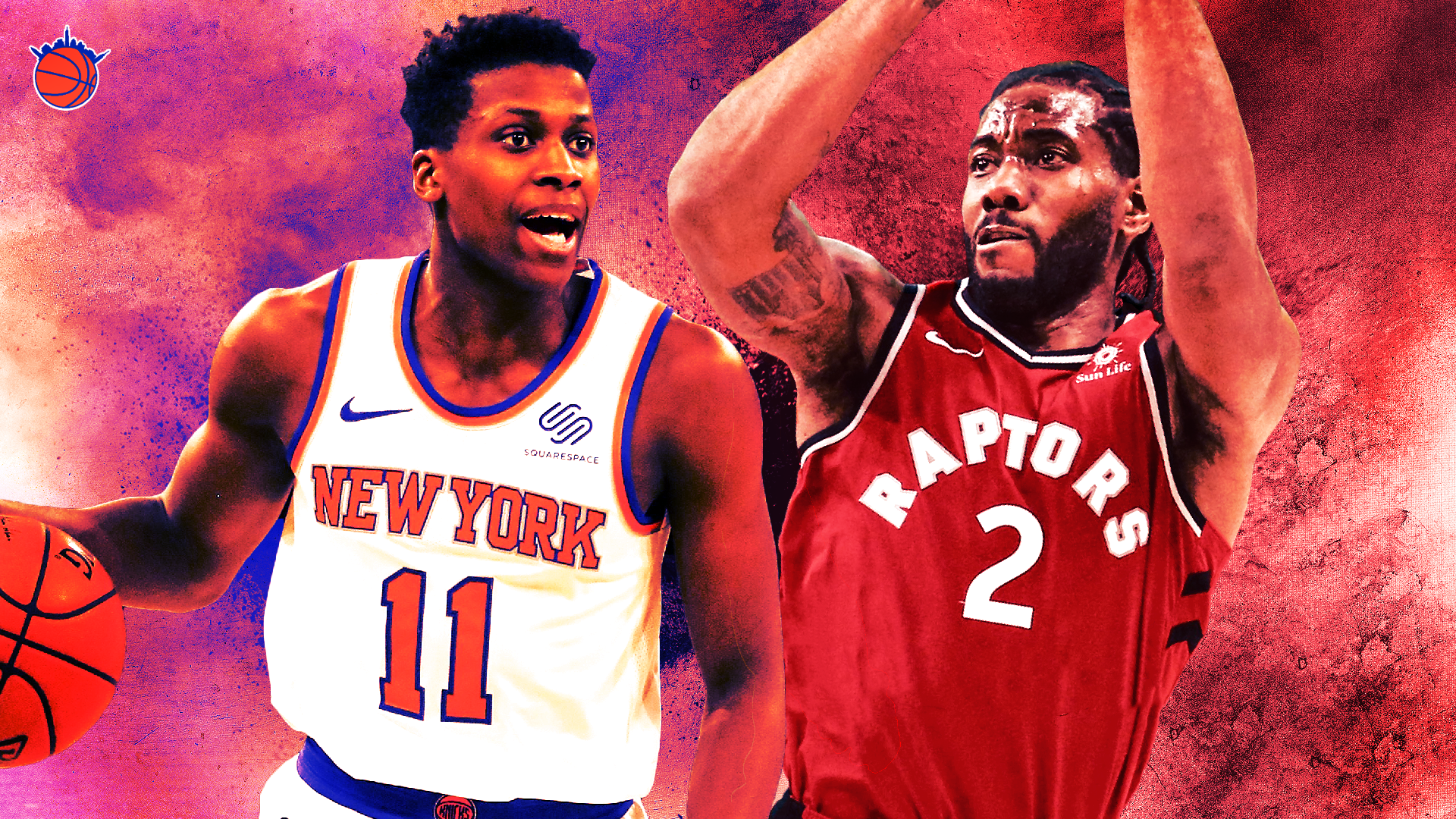 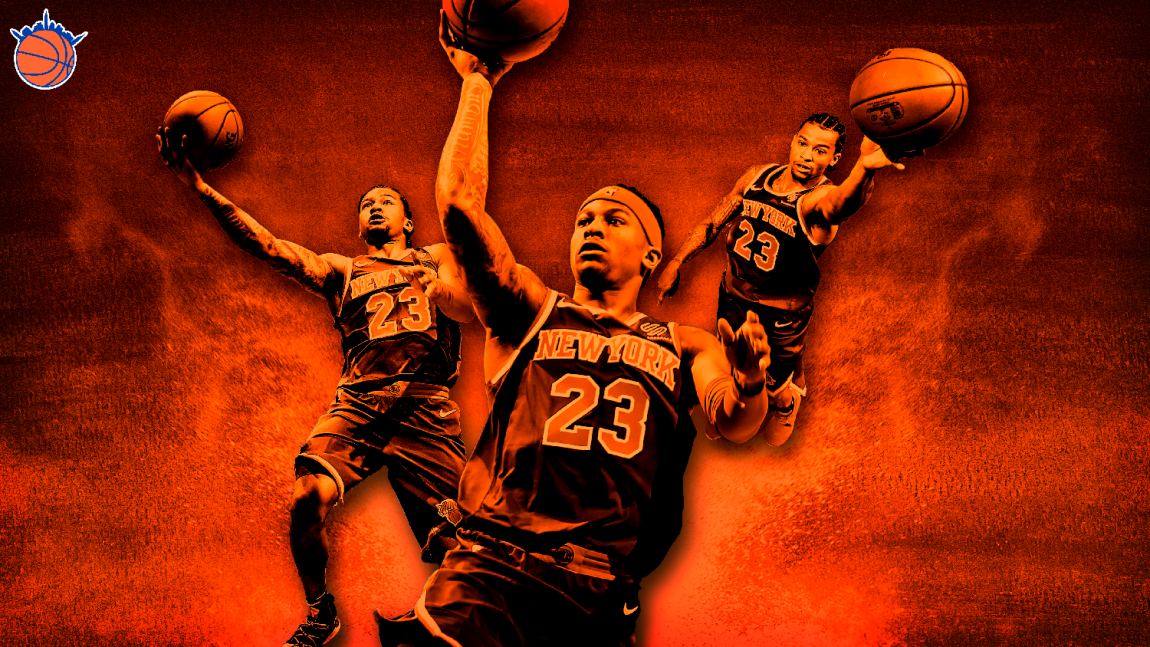