Despite all signs pointing to a productive rehab from Porzingis and his camp, New York’s prized power forward/center’s injury has dampened the rebuild timeline for the Knicks—which could be for the better.

On February 6th, Kristaps Porzingis cut to the basket, rose up like a Eurasian sparrowhawk, and unleashed an almighty yam on then-MVP candidate Giannis Antetokounmpo. For about a half-second, the clouds parted and a thousand angels sang in praise of the one-horned one—but they immediately closed again, and instead, a thousand angels sack-tapped my soul as Porzingis fell back down to Earth, holding his knee in agony. It was a lightning bolt delivered from the basketball gods on high declaring that it was finally time to face the truth and rebuild. It’s easy to forget that for the first half of last season, tank versus eighth seed was a real debate.

Look, I’m sorry to bring up these bitter memories. I don’t need to tell you readers how awful that moment was, and it was in some ways compounded by the injury concerns that have been voiced since the 7-foot-3 flagpole was drafted. Something about the Unicorn’s movement, the way he’d stiffly land on those skinny legs after a vicious block or put-back dunk, seemed to foreshadow this moment.

In three years, Porzingis has never played more games than he did during his rookie season, where he suited up for 72 contests. His second year saw that number fall to 66, and the ACL cut him down at 48 games this past season. Though most of his injuries have been unrelated, the shoulder that kept him out of the final stretch of his rookie season (injured during a monster rejection of Alonzo Gee), the sore Achilles that kept him out of four games during his second year, and all the little nagging ankle and other joint ailments have piled up. His history as an anemic have prompted questions about how long his body will be able to withstand the grind of the NBA.

It doesn’t help that Porzingis has been pursuing his rehabilitation independent of the Knicks, and that the few updates provided by his (non team-appointed) trainer, Squat King Carlon Colker, have made some a little nervous about the approach being taken to his recovery.

But while reports and updates from official channels have been limited, recently we’ve gotten some news, courtesy of Porzingis himself. On June 9th, the second episode of the Porzingis-family-produced series “Porzingis’ Comeback” dropped. The premier episode of this flagship show came out in April, and at over 23 minutes, even for a hardcore basketball junkie like myself, it’s long. Don’t get me wrong; it’s great to see Porzingis in high hopes and to hear the surgical plan, but really the only takeaway from the nearly-half hour of intimate footage comes at just past the 18-minute mark, when Porzingis makes a joke about getting too jacked. Colker responds, “You’re not gonna be allowed to get bigger without getting faster… what is power? It’s not just mass, it’s mass and velocity. So you have to earn your bigness.”

That sounds promising (also check out minute 20 for a cameo from our favorite former disgruntled center)! Oh, and remember those concerns we (okay, I) mentioned before about how Porzingis lands after a dunk or block? Well, entry number two in the series has us covered there:

Check out the two-minute mark, and listen to what his surgeon has to say:

“The Spanish fitness coach already recognizes that Kris’ body mechanics could improve. When he lands and jumps his knee does [shows knee buckling] because his hip isn’t as strong… so the idea is get his ACL done properly, super strong, and then take a lot of time to improve his body mechanics. That’s the best defense against this happening again… I think the whole idea is to make him, and this may sound crazy ’cause he’s a world-class, elite athlete, but a better athlete by being stronger. Not a more skilled basketball player but a better athletic body.”

Apparently, the plan also includes KP dressing like he’s about to rob a gas station as he does shoulder workouts, which makes sense. 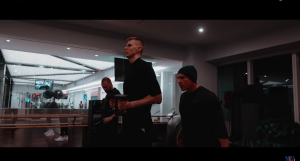 So what does this tell us? For one thing, that the people closest to Kristaps during his rehab are, at least while the cameras are rolling, preaching patience. This doesn’t sound like the approach of a team that will rush Porzingis back to the court the moment the doctors clear him for full contact. To me, that sounds like the December return that has been posited before as a best-case scenario is out the window. This could end up being a blessing in disguise in several ways. First: Porzingis is way too valuable to the franchise long-term to rush back. The front office needs only look at their neighbors to the southwest for inspiration: the Hinkie-era Sixers aired on the side of caution almost to a fault when it came to the recovery of their key pieces, knowing that whatever short-term benefits, optics or otherwise, that came with bringing Embiid or Simmons or Noel back was vastly outweighed by the possibility of bringing them back too soon and risking further complications. The thought of someone as skinny and athletic as Kristaps Porzingis rushing back from a knee injury is downright terrifying.

The second, and not insubstantial, reason to keep him out longer is one that fans might not be happy to hear—it’ll help the team tank, something they’ve struggled with in recent years. As long as Porzingis is on the floor, they’ll be too good to be a true bottom dweller, but if they want to compete for championships during Porzingis’ Knick career, they’ll need at least one more really good asset, whether for a trade, to entice free agents, or just for the player themselves (hello Zion Williamson). That’s not to say that Perry and company will hold the Unicorn out for longer than they have to just to add to the loss column, but it’s something they will consider when finalizing his timetable for return. Constantly picking in the 8-10 region is a good way to end up like the Kings.

That’s why if the team does want Porzingis to get some burn this coming year, I would be surprised if it were before the All-Star break. And despite all the tanking concerns laid out above, if he’s unquestionably ready to go after that point, it might be a good idea.

Why bring him back for the tail end of the season instead of giving him the extra three months of recovery, you ask? As important as getting the body back in game shape is, even more important is getting the mind back in game shape. As former-Spur and fellow ACL-tearer Speedy Claxton said, “You probably start to feel like your old self a year and a half after the injury. The mental aspect of it is the toughest, It’s a long, grueling rehab process and you don’t know if you’re ever going to be the same.” Claxton won a ring coming off the bench for the 2003 Spurs two years after his own injury.

The year and a half that Claxton mentions also fits with statistical output from many players with ACL injuries, from Bernard King to Ricky Rubio to, most recently, Zach LaVine. One of the common threads I saw looking at the career numbers of many of these players is the two-year period it takes to get production to a higher level than it was pre-injury. Not only did points and rebounds drop, but more tellingly, dunks and shots at the rim fell dramatically for most players during the partial season they returned from injury and the following year (this obviously doesn’t apply to every single player who has torn an ACL, but it seems to occur more often than not). For that reason, having KP start working through the mental roadblocks before next season could improve the time needed to return to the form he showed early last season.

Finally, there’s the question of how this injury affects negotiations on Porzingis’ extension, which could run up to $157 million. A little over a week ago, Walt Frazier told Ian Begley that the Knicks are in a “quagmire” when it comes to paying the Unicorn, which makes sense considering the team’s history of paying injury-prone big men and their desire to keep max space open for next summer. For now, it doesn’t seem like a deal will get done, but with the relationship between star and front office only recently getting back on track, it’s fair to wonder how worried Scott Perry is about offending Porzingis with a below-market offer, or how KP would react to the inclusion of injury clauses like we’ve seen in the case of Joel Embiid.

I know that years of Knicks fandom have taught most of us that the Knicks can’t have nice things, and that when they do get those nice things, it tends to end in the most painful kind of heartbreak imaginable. But in a twist even M. Night Shyamalan couldn’t see coming (I’m pretty sure he’s a 76ers fan), it seems like the team and Porzingis’ team are handling this devastating injury in a competent manner that could eventually lead to a more deadly, dangerous, and durable Unicorn.