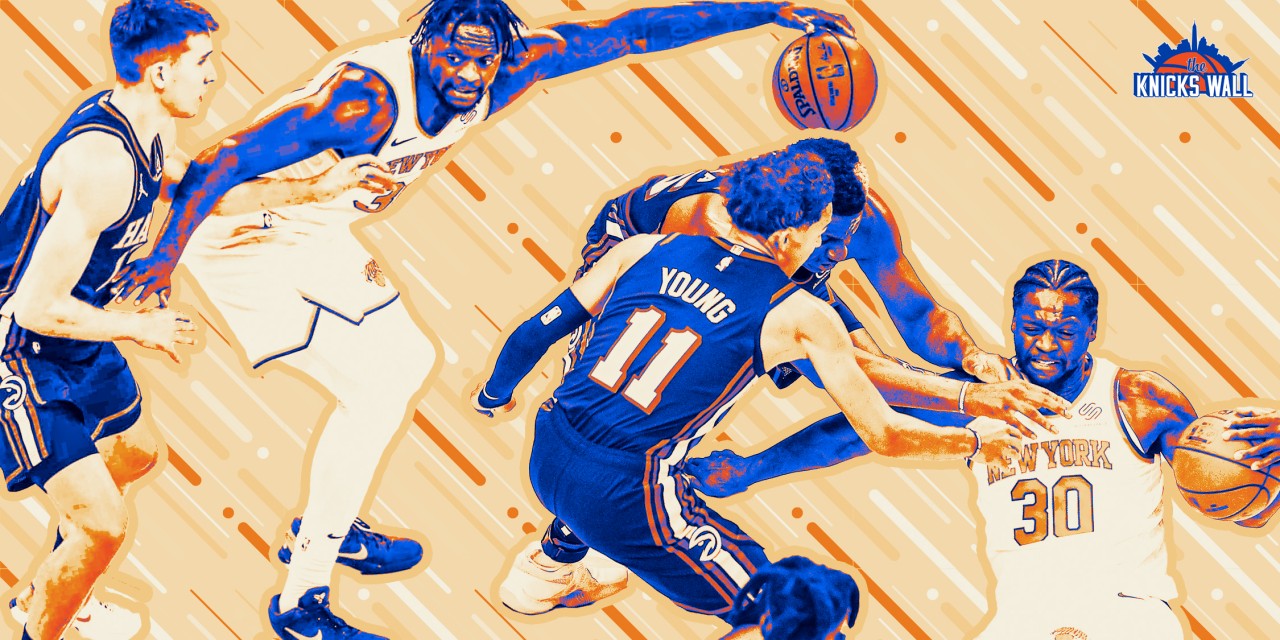 With time to reflect on their five-game defeat in the first round of the playoffs, the Knicks can take away several positives from the experience.

Losing in sports can be a bitter experience regardless of the level of competition. To lose an NBA playoff series as decisively as the New York Knicks did to the Atlanta Hawks is no simple pill to swallow, neither for the fans nor the players, an unforgettable redemption season notwithstanding.

It’s easy to get hooked up in the negative storylines permeating amongst Knicks faithful in recent weeks. New York had no answer for Trae Young as a scorer or facilitator. Julius Randle and R.J. Barrett struggled mightily to shoulder the offensive load in their first postseason appearances. Both are valid and accurate observations but don’t tell the entire story of the Knicks’ playoff run, however brief it was.

However, it wasn’t all doom and gloom from the New York perspective, despite what local news sources love to proclaim. The bright spots may not be as apparent as the mishaps and blunders made by this team, but that doesn’t mean they don’t exist. One has to look deeper, past the four losses in five games, to discover the positive takeaways of this series.

“Happiness can be found, even in the darkest of times, if one only remembers to turn on the light,” Harry Potter‘s Professor Dumbledore says in The Prisoner of Azkaban, timelessly applicable with this premise. Of course, by no means are the Knicks amid “the darkest of times”—they made the playoffs for cripes sake.

Although, the idea that one must “turn on the light” to recognize the positives out of an adverse circumstance rings true to the Knicks and their playoff shortcomings. Let’s be purveyors of positivity and highlight the good instead of harping on the bad.

Admittedly, postseason experience is a concept that folks can overvalue regarding how it correlates to long-term success, at least in some cases. For instance, if a team is getting booted in the first round yearly, is said group really improving? With that in mind, the Knicks are not in such an Indiana Pacers-esque situation.

Throughout the history of this league, young cores have utilized their first playoff series defeat as a stepping stone towards more remarkable achievements. Randle, as well as the group of Knicks still on their rookie contracts—all of whom, had never logged a minute of playoff hoops—experienced first-hand what it takes to win at the highest level.

The 2014–15 Boston Celtics are a prime example of what playoff action at a young age can do towards solidifying a winning culture in the future. Boston, a team universally perceived to be amid a rebuild, snuck in the top eight that year as the seventh seed in the Eastern Conference and got swept by LeBron James and the Cleveland Cavaliers. So why does this matter exactly? Well, the Celtics parlayed their short postseason cameo into three appearances in the Eastern Conference Finals over the next four seasons.

From Isaiah Thomas to Jayson Tatum, players came and went over the Brad Stevens era. Still, their identity as a three-point-centric, defense-first team persisted. Not to mention the likes of Tatum, Jaylen Brown, and Marcus Smart have evolved into the heady, poised talents they are today, thanks partly to the wealth of postseason minutes they’ve already accumulated in their mid-20s.

The question is, what’s New York’s identity? Succinctly put, they’re defensive-minded, with an emphasis on sharing the sugar on the other end. Whether the Knicks played to their strengths enough against Atlanta is for debate, but defense and the unselfish offense will be a pair of M.O.’s of this squad for as long as Tom Thibodeau is at the helm.

Obi Toppin made his presence felt on both ends

Heading into his inaugural NBA season, Knicks faithful expected much of the Dayton standout. Unfortunately, though, Toppin’s defensive faults meant consistent minutes were hard to come by. As a result, he fell short of the Rookie of the Year contender expectations drummed up by fans and media alike. But Toppin seemed to have turned a new leaf in the postseason, as he showcased the newfound two-way ability and staked his claim to be a rotational mainstay in the future.

Toppin’s defensive versatility has the potential to be a valuable weapon moving forward. He put together several auspicious sequences jostling with sweet-shooting bigs on the perimeter and stymieing guards at the rim throughout the series.

Now, by no means is Toppin some top-tier irritant. However, he likely won’t be considered for an All-Defensive team selection anytime soon, namely because his defensive I.Q. is a work in progress. Although his effort was consistently phenomenal all series long—he worked as hard as any Knick to prevent his assignments from scoring.

Above is Toppin’s defining postseason moment. He keenly recognizes that with Noel forced to switch on the perimeter, there’s nobody protecting the interior. He then does a beautiful job of rotating over and timing the block on Kevin Huerter’s layup attempt. From there, Toppin sprints the length of the floor and gets rewarded with an alley-oop slam. It was a fantastic two-way sequence that highlighted the player Toppin can become and lends credence to the notion that small-ball center minutes may be in the cards for him.

Here Toppin takes the challenge of defending Danilo Gallinari in stride. As someone who can score from all three levels and get hot in a moment, Gallinari is a handful to contain in one-on-one situations. But Toppin checks the Italian as well as possible in this instance. How exactly? The foot speed and the contest. Toppin stays with Gallinari every step of the way and doesn’t relinquish any separation, deterring a dribble-drive in the process. Once Gallinari realizes the shot clock is ticking down, he settles for a long two, which Toppin challenges perfectly.

Offensively, Toppin didn’t set the world on fire but played his role and played it well. He ended the series 12-for-20 from the field (60%), including a respectable 3-for-9 on threes. Primarily scoring his points off of catch-and-shoot treys and baseline cuts for point-blank looks, Toppin served as an efficient opportunistic bucket-getter.

He proved across the five-game series that he’s capable of making an offensive impact without taking the ball out of the hands of Barrett and Randle. Thus, he’s an ideal long-term complementary piece alongside the heads of the snake. Perhaps Toppin won’t be the primary scoring option Knicks fans dreamed he’d be. Nonetheless, he’s a well-rounded offensive player whose long-distance shooting and above-the-rim prowess have him tailor-made for the modern NBA.

The Hawks outclassed the Knicks in just about every facet during the last two games of this series. Atlanta won Games 4 and 5 by 15.5 points per contest, all while holding the Knicks to under 100 points in both matches. New York’s vaunted defense crumbled under the might of Trae Young and company. However, earlier in the series, there was a lot more to like about the Knicks’ defense, specifically how they forced turnovers and pressured the ball.

An underrated wrinkle of New York’s defense is their capacity to grab steals and wreak havoc in passing lanes. In their Game 2 win, this strength of the Knicks was on full display, as the team tallied a series-high eight steals.

Believe it or not, it was veteran Taj Gibson of all suspects who led the way in the steals department with three. Gibson provided New York with rock-solid minutes off the pine for the entirety of the postseason, and his active hands came up huge for New York in their lone triumph against Atlanta.

One would be remiss to bring up New York’s defense and not mention Nerlens Noel. With Mitchell Robinson sidelined, Noel was New York’s de facto interior anchor. And while he accumulated just three blocks in five games, Noel harried and bothered countless in-close shots, leading to sub-par shooting stretches from the Hawks, most notably the second half of Game 2.

The Hawks scored a mere 31 points in the final 24 minutes of Game 2, and Noel deserves a piece of the credit for this feat. Whether he was contesting shots or pulling down defensive rebounds to eliminate second-chance points, the Knicks couldn’t have won Game 2 without the Massachusetts native.

Atlanta, a team that boasts one of the league’s elite rebounders in Clint Capela, snatched only six offensive boards in Game 2, far below their season average of 10.3. Noel had an up-and-down series overall, but it was performances like his one in Game 2 that should have Knicks fans praying he re-ups with New York. Unfortunately, top-five shot-blockers don’t grow on trees, and there almost certainly won’t be another center available on the market with Noel’s skill set and affordability.

The New York Knicks know their strengths; that’s step one in the process of becoming a great team. Now it’s about tinkering with the roster around the margins to better mitigate this team’s weaknesses, with offensive creation being their chief Achilles’ heel. However, with positive development from their young players, plus an offseason to add some more talent to the roster, the Knicks could enter next postseason with the lessons learned from the year before, looking to move forward in their journey.