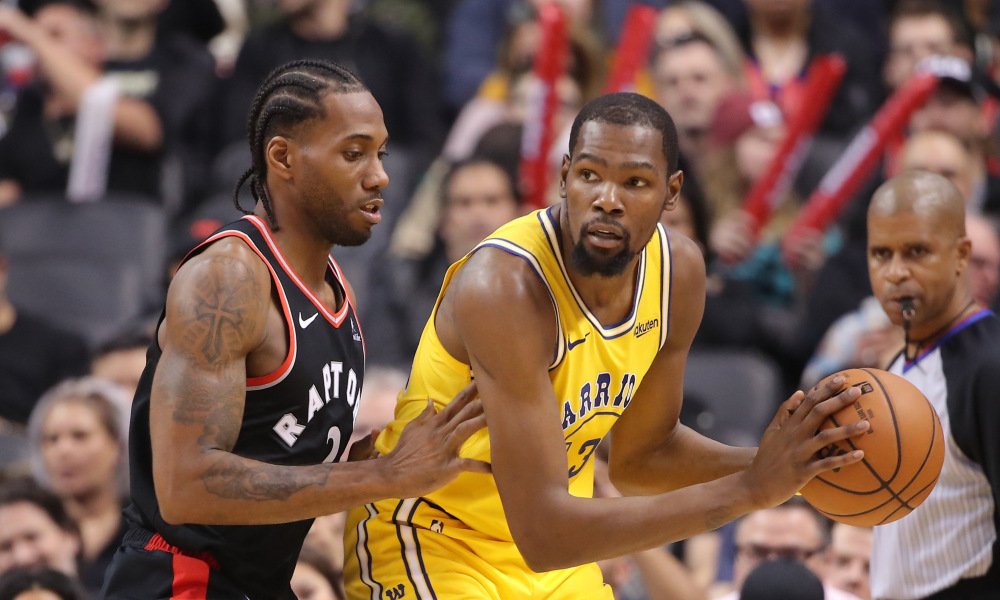 The two All-NBA caliber players, Kevin Durant and Kawhi Leonard, have been talking about landing with the Knicks, per a report.

ESPN’s Ramona Shelburne and Adrian Wojnarowski are reporting on Saturday that both free agents Kevin Durant and Kawhi Leonard—two of New York’s top targets—have engaged discussions surrounding a common team to sign with.

The discussions the two Finals MVPs have had are not a clear determination that Leonard and Durant plan on playing together next season but that the possibility exists.

“Leonard and Durant are each planning discussions and meetings with several teams, but only Clippers and Knicks are in alignment with salary cap space and common interest to sign both players.”

The report adds that the pair of two-time NBA champions are “planning to talk” with both teams at the dawn of free agency, which opens at 6 p.m. ET tomorrow.

This isn’t the first we’ve heard of a potential All-Star collaboration and New York as the spot to join forces. For awhile, the Knicks planned to use their near $70 million in cap space to sign two stars, although many speculated the two would be Kyrie Irving and Kevin Durant. ESPN also reports that Irving’s “focus” in free agency are the Knicks’ crosstown rivals Brooklyn Nets.

However, the addition of Leonard in New York’s crosshairs isn’t new either. Per the New York Post, the Knicks believe they’ve secured a meeting with the reigning Finals MVP, who has also been courted by the Clippers, Lakers, and incumbent team Toronto Raptors, for which he delivered the franchise’s first title. Further, Leonard, Durant, and Irving are the only “max-worthy” players in the eyes of top Knicks brass.

Durant, meanwhile, is in New York for the start of free agency with business manager Rich Kleiman. Durant and Kleiman plan on hearing pitches from four teams: the Knicks, Nets, Clippers, and Warriors.

It’s been reported that Leonard will be camped out in Los Angeles to receive pitches, however. It’s unclear whether Leonard and Durant have spoken in person or communicated through another means.