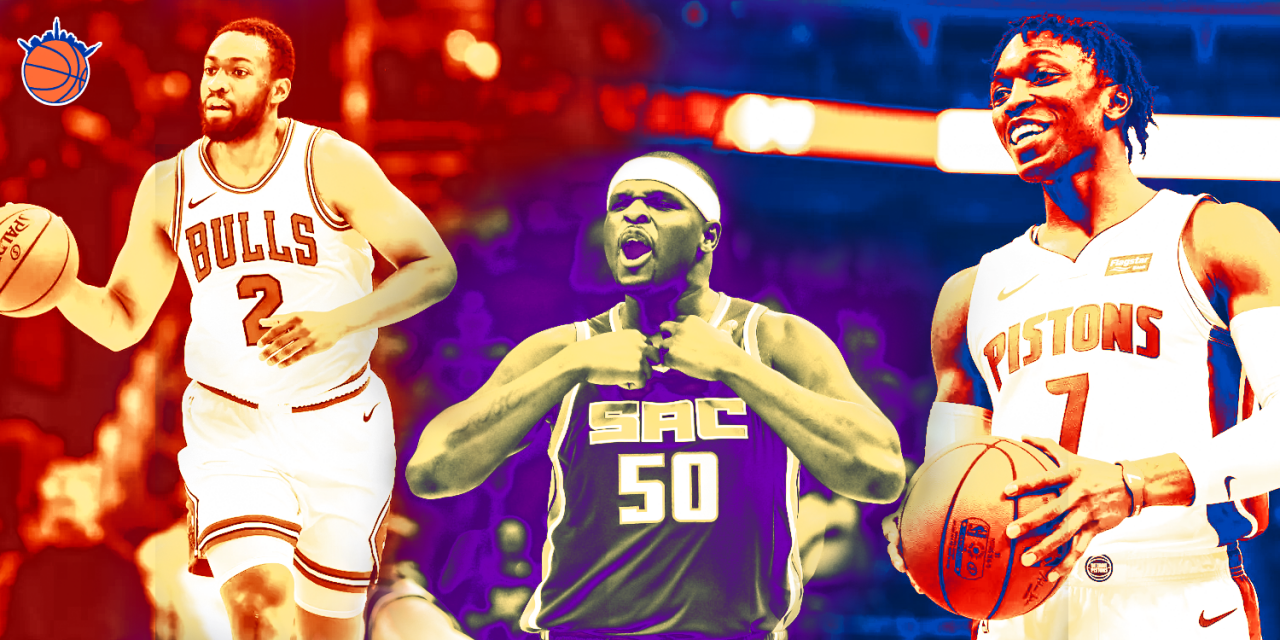 With the NBA trade season finally upon us, let’s examine some potential moves the Knicks could make before the February 7th deadline.

Halfway through another losing season, it’s hard not to wish that life was like NBA 2K and we could just sim the last 40-odd games of the season and get to the prize that with a little luck waits at the end of the long, dark tunnel.

While many fans are all in on #WHOLETEAM development and Operation “Cry On for Zion,” it’s not always easy fanboying for a team that has lost 252 games in the last four and a half seasons and is currently worse than they’ve been in years.

Alas, the NBA draft is still months away, and the Knicks have many games to lose before they sleep. But that doesn’t mean there’s no cause for intrigue during these doldrum days. Kevin Knox is starting to bloom like a beautiful, five-headed flower in front of our eyes, Frank is healthy and doing stuff again, and eventually, Mitchell Robinson should return, jolting some life into the vegetative Knicks defense.

And there’s something else to get excited about: NBA Trade Season is finally upon us!

The Knicks are clearly hoping to be deadline sellers, though it’s unclear how easy that will be. Even the most established members of this roster have an ill-defined value, as they all seem to fall into three categories:

Several of the good-but-not-quite-good-enough teams that would ordinarily be prime buyers will have max cap space this summer and/or need to use the space they have to resign vital guys (both L.A. teams, Philadelphia, Milwaukee), which complicates the idea of shedding future salary via trade. But that doesn’t mean that the Knicks have no avenues for roster improvement.

They’ll need to find trade partners right in the sweet spot—teams that a) aren’t planning on being major players in free agency, b) are looking for quick-fixes in order to boost playoff chances, and c) have roster issues needing resolution.

So which teams fill some or all of these qualifications?

As a young team fighting for the playoffs for the first time in years, with little hope of landing a big star free agent, it’s natural for Vlade Divac to be looking around the league for low-risk talent injections.

One of the first Woj-bombs (or Woj-firecrackers) of this year’s trade season centered around preliminary discussions between the two teams regarding a Kanter for Zach Randolph swap—a move that would give the Kings more dynamic frontcourt scoring and would give the Knicks nearly $19 million in expiring contracts that won’t constantly subtweet the team when asked to sit on the bench for the sake of development.

Seeing as Kanter can actually still play (on one end of the floor at least), the Knicks reportedly have asked the Kings for a second-round sweetener, but teams are wary of giving up cost-controlled young assets, especially for a half-year rental. As it stands, talks seem to have gone dormant, but this is the kind of no-lose deal that may be revisited as February 7th nears if neither team has found a better option.

Okay so the Bulls don’t really fit the conditions laid out above, but let’s ignore that for now, because another name that has been linked to the Knicks in the last week is Jabari Parker. According to Stefan Bondy of the Daily News, the Knicks have discussed a trade that would send Kanter to an undetermined third team. The Bulls have no use for Kanter, but they could be hoping to get an asset from the aforementioned third team in exchange for facilitating the deal.

We’ve written before about the dangers of trading for Parker (the fact that two teams have given up on him in five years is almost as worrying as the multiple ACL tears), but since the second year of his $40 million contract is unguaranteed, it’s not a terrible break-in-case-of-emergency option to have in the back pocket.

Stop me if you’ve heard this before: the Pistons are a mess. They’re completely capped out, their stars don’t fit well together, Reggie Jackson is basically untradeable, and their wing depth consists of Baby Big Dog, Stanley Johnson, Reggie Bullock, and Luke Kennard. Hell, they’ll be paying Josh Smith until the summer of 2020. They canned Stan Van Gundy last summer and hired the reigning Coach of the Year Dwayne Casey, so you can bet Detroit is anxious to make the playoffs.

That makes the Pistons one of the few teams that make sense as a trade partner for Tim Hardaway Jr.

Detroit needs shooting badly, as well as general competence from the wing positions. Timmy could open up the floor for Blake Griffin and ease some of Reggie Jackson’s burden, under which he seems to currently be buckling.

And what of the Knicks? If there’s one thing we know for sure about Scott Perry, it’s the love he has for the 2015 draft, and it just so happens that Detroit has a 2015 lottery pick who has yet to make good on his potential coming off their bench. That’s right—Stanley Johnson! Johnson would give the Knicks the fourth, fifth, seventh and eighth picks in the 2015 draft, and that weirdness alone might make it worth it.

Would a deal like this make sense if the Pistons include a protected future pick? 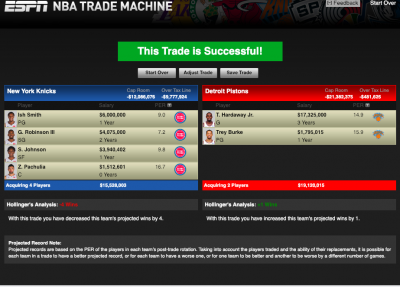 Not only do the Pistons get a starting shooting guard and a punch off the bench, but they get to bring the Michigan boys back to where it all began! The Knicks free up a ton of cap space (Glenn Robinson’s second year is a team option), get a future pick, and a chance to kick the tires on Stanley Johnson (who probably sucks, but that’s almost beside the point).

Tom Thibodeau is out in Minnesota, but that doesn’t mean all of the Wolves’ problems are solved. Their bench is still thin—as in, playing Luol Deng thin—and with Karl-Anthony Towns’ extension kicking in and Jeff Teague likely to pick up his $19 million player option, there won’t be much money to throw around in the summer.

If the Wolves want to make a push for the playoffs, they need a couple more 3-and-D types who can come off the bench and play good team ball around KAT. Luckily, the Knicks have a couple of those guys. 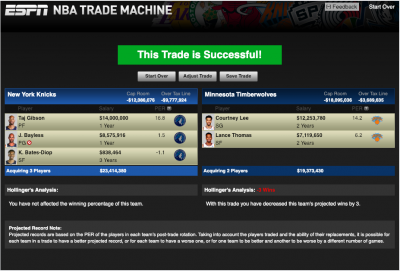 If the Knicks throw in one of Charlotte’s second-round picks, a deal like this could be something the Wolves talk themselves into. It would’ve been easier with Thibs, but this would let the Wolves try out the Dario Saric–KAT frontcourt the rest of the season. Additionally, it gives them two vets who know how to play with Derrick Rose, could actually help in the playoffs, and come off the books at the same time as Teague—giving them a little breathing room in the summer of 2020.

The Knicks get a salary dump and a youngish prospect who’s been tearing up the G League. It’s possible the Wolves have no interest in giving up Keita Bates-Diop, but you never know until you try.

The Grizzlies look increasingly likely to make some kind of move before the deadline, but whether that will be to compete now or to bottom out in an attempt to keep their top-eight protected pick remains to be seen.

Grizz next four games: vs MIL, @ BOS, @ TOR, vs NOP. If the hole gets much deeper as the deadline approaches you at least have to investigate some unpleasant things.

Hardaway would make sense in the Memphis starting five, but the Boston trade makes it unlikely that they’d have enough to offer for him unless the Knicks opt for a salary dump (JaMychal Green and Garrett Temple for THJ straight up works salary-wise), which they should resist doing until the summer, if at all.

The same Green/Temple framework works for Lance Thomas and Courtney Lee, but that’s not a clear upgrade for Memphis.

Bottom line: unless Memphis suddenly sours on Dillon Brooks (aka the good Brooks), there’s not a lot here that would make sense for either team.

The Suns and Magic both have clear holes at the point guard position, even if Point Devin Booker has gone about as well as one could hope. At 19-24, Orlando is only a game back of Charlotte for the eight seed with 31-year-old D.J. Augustin manning the helm. Getting a team-controlled point guard like Mudiay would make some sense, if they had anything to offer.

A first-round pick is too much to give up, but do the Knicks pull the trigger for two seconds? Probably not. The Magic, despite being stocked with youth, have few prospects outside of Mo Bamba and Jonathan Isaac, and their only valuable expiring contracts (Nikola Vucevic and Terrence Ross) are having career years.

The Suns have more young and enticing players than the Magic, but there’s no real reason for them to make a move right now. They’re under no illusion of being playoff contenders, and even with Ryan Anderson’s contract on the books, they’re in a good position salary cap-wise moving forward. Besides, they’ve got De’Anthony Melton and Elie Okobo, two rookie guards fans can be super high on.

These three teams all fit the aforementioned conditions, but don’t have the expiring contracts to make a deal that makes sense. Trevor Ariza has been playing out of his mind since coming over to Washington, New Orleans needs true wings, and Charlotte is just loaded with mediocre players getting overpaid for too many years.

These three teams are playing well enough to keep themselves in the playoffs as it stands, despite having clear roster deficiencies. Portland, like the three teams listed above, is mostly filled with multi-year contracts, but at least their mediocre overpaid players are mostly young. Everyone except James Harden on the Rockets is either hurt, terrible, or has been banished to the Isle of Misfit Toys. The Jazz currently have no healthy point guards other than the obnoxiously handsome Dave Franco, sorry, make that Raul Neto. Whether due to fit (Portland), contract matching (Houston) or culture (Utah), all three teams seem unlikely to be able to put together an offer that makes much sense, but if they get creative, something could come together.

None of those offers whet your whistle?

Well, yeah. The Knicks don’t really have the pieces right now to make a deal for anyone too exciting. Maybe another team like OKC or Indiana comes sniffing around potential wing upgrades, but some cap relief and a second-round pick or two might be as much as we can reasonably hope for this year.

That said, Perry and Mills have shown themselves to be fairly proactive on the market over the last year and a half, so if there’s a deal out there to improve the team, count on them to sniff it out—which, after years of dreading front office blunders, is a welcome feeling.