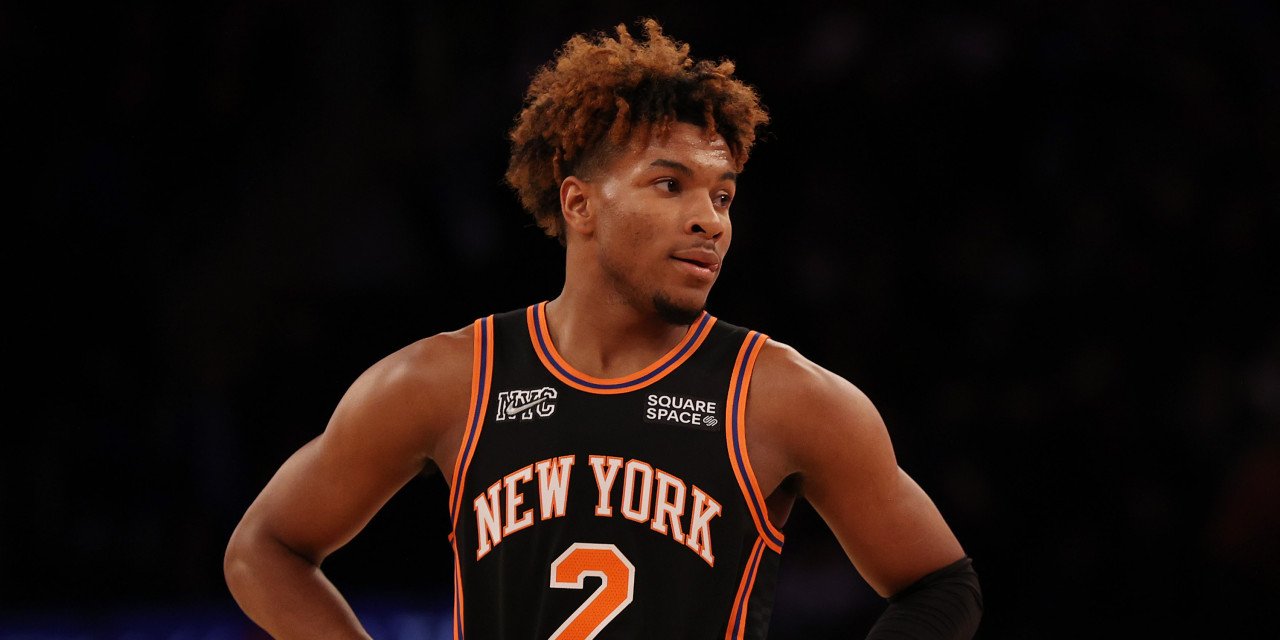 The 2022 NBA Summer League in Las Vegas is set to kick off for the Knicks on Friday, with some old and new faces on a prove-it roster coached by Daisuke “Dice” Yoshimoto.

While the draft was disappointing for many hopeful fans looking for new young talent, Summer League still provides the same sort of adrenaline for Knicks fans. For the eternal optimists out there, you get 12 more opportunities to fall in love with young kids trying to earn their shot in the NBA.

This New York Knicks roster comes with names and faces—both new and unfamiliar—but most certainly has players that will put on a show. It is only a matter of time until Knicks Twitter are frothing at the mouth about the young ‘Bockers as they get ready to complain online about the potential lack of playing time under Tom Thibodeau.

Let’s take a look at the 2022 Las Vegas Summer League roster and look at where these players came from and what they could mean for the New York Knicks going forward.

The returning Knicks that fans will most be looking forward to watching are the representatives of the standout 2021 draft class. Leon Rose’s beloved reputation comes from his draft nights. Not only has he drafted well, but he has wheeled and dealed his way to getting the guys that he wanted. There is no better time to put that on display than Summer League, specifically with the “veterans” we will get to watch from Las Vegas.

Last year after Immanuel Quickley and Obi Toppin put on a show in their second year, one could hope and expect the same from last year’s first-round pick: Quentin Grimes.

Quentin Grimes: The former Kansas Jayhawk/Houston Cougar had an impressive rookie season before it was derailed by injury. There are high expectations and even the chance that he will be able to break into Thibs’ rotation and take some playing time from Evan Fournier. Grimes will have a chance to show what he is capable of by shooting the lights out of the gym and putting up high-scoring numbers in Vegas.

Miles “Deuce” McBride: Even without Rokas Jokubaitis on the roster, last year’s draft class will provide a chance for backcourt help in the now more crowded backcourt from former Draft Twitter darling Miles McBride. Deuce was the 36th pick of last year’s draft and should look to show why he can be a legitimate backup option thanks to his defense. His defense will be a highlight of the summer league, but he can also showcase his scoring as he did last year in the G League.

Knicks should give Miles McBride a chance at PG. He's averaging 30 & 10 in the G League but doesn't play for NYK. In loss tonight: RJ Barrett had 23 points on 25 shots, Julius Randle was good early but can't run offense late. The need for playmaking is obvious. Why not try Deuce? pic.twitter.com/9Z7fGTI23m

Jericho Sims: Jericho Sims was the fourth player the Knicks took home in last year’s draft and arguably the player most built for the summer league. Given the addition of Isaiah Hartenstein and the re-signing of Mitchell Robinson, it is hard to see how last year’s 58th overall pick will be able to find time on the main roster. However, Sims’ elite athleticism and finishing at the rim will be a highlight of Las Vegas when he is catching lobs and blocking shots.

New Kids On The Block

While the Knicks passed on their opportunity to take anyone at 11 as well as the opportunities to trade up or trade down and draft someone, they did come away with a couple of talented young players on draft night. Not only could you argue that they got two players with first-round talent, but they have something to prove.

Trevor Keels: Trevor Keels is a name that would be familiar to any college basketball fan as there were more than a few games where he was the most important player on the second-seeded Duke Blue Devils that boasted three players selected in the top 16, including no. 1’s Paolo Banchero.

This will be the first introduction to Keels for the larger Knicks audience, and I could not imagine a better place for him to shine than the Summer League. The gritty, hard-working, defensive-minded prospect will be able to win over the New York faithful with the level of effort and activity he plays with even in Summer League.

Jean Montero: Compared to Keels, who was a household name at one of the most famous college basketball programs ever, Montero has had very few eyes on him from the Overtime Elite program. Montero was the first swing from a new alternative way to get to the draft, and even though they failed to get anyone selected on draft night, his success could turn heads.

Jean Montero went undrafted this year, but as an 18 year old who has been playing pro since 2019, he’s got a lot of potential. Excited to see him in Summer League pic.twitter.com/i1VNeqVW2q

It remains to be seen what Montero will look like against a higher level of competition, but as an undrafted free agent, one can assume he will be motivated. A shifty and highlight-focused guard can certainly succeed at Summer League, and even if he will likely be in the G League this season, this will be a great introduction to the fans of what that may look like going forward.

Feron Hunt: After going undrafted out of SMU, Hunt found his way to the Westchester Knicks after a few different stops in the G League last season. He averaged nearly 18 points and eight rebounds for the G League affiliate earning a two-way contract that should look to continue this season.

M.J. Walker: The 24-year-old Florida State alum is another Westchester Knicks keystone who averaged 11 points a game last season and even appeared in a few NBA games for the Suns due to COVID last season.

Quinton Rose: The 24-year-old Rochester native played in one summer-league game for the Knicks last season after graduating from Temple. The 6’8″ wing averaged eight points a game in Westchester last year.

Aamir Simms: The four-year Clemson Tiger big man is looking to improve upon his 3.8 points and 2.8 rebounds per game he averaged in last year’s Summer League in order to garner a promotion from Westchester, where he spent last season.

The Rest of the Squad

Vince Edwards: The elder statesman of the team, having been drafted in 2018. After being All-Big Ten for a couple of years at Purdue, the 6’8″ wing has bounced around the G League where he has had varying levels of success. While he has won a G League title, the 26-year-old is still trying to find his shot in the NBA.

DaQuan Jeffries: In the three years since Jeffries was drafted out of Tulsa, he has appeared in 47 NBA games and been on four different teams’ rosters, as well as with three different G League affiliates. The 24-year-old is trying to find a place in the league after a career 14-point average in the G League.

D’Shawn Schwartz: The undrafted free agent out of George Mason ranked sixth in the A-10 in scoring (16.8 points per game) in his fifth year in college after transferring from the University of Colorado. The 38% three-point shooter could get hot from deep in Vegas.

Jahvon Blair: A 6’4″ Canadian guard that made his way to playing overseas in Finland after four years under Patrick Ewing at Georgetown.

Garrison Brooks: An undrafted free agent big man that averaged 10 points and six rebounds at Mississippi State, where he had transferred to with his last eligibility after an up-and-down four years at the University of North Carolina that included a standout 17 points and nine rebounds junior season that earned him second-team All-ACC.

Micah Potter: Received last year’s first-team All-Rookie honors in the G League system for Detroit where he played a couple of games last season after four years of being a very Big Ten big man for both Wisconsin and Ohio States.

This G League roster does not have some of the big-name lottery picks that other teams will bring to Las Vegas, but it has a lot of hard-nosed players that will work to put on a show for the fans and the front office alike.