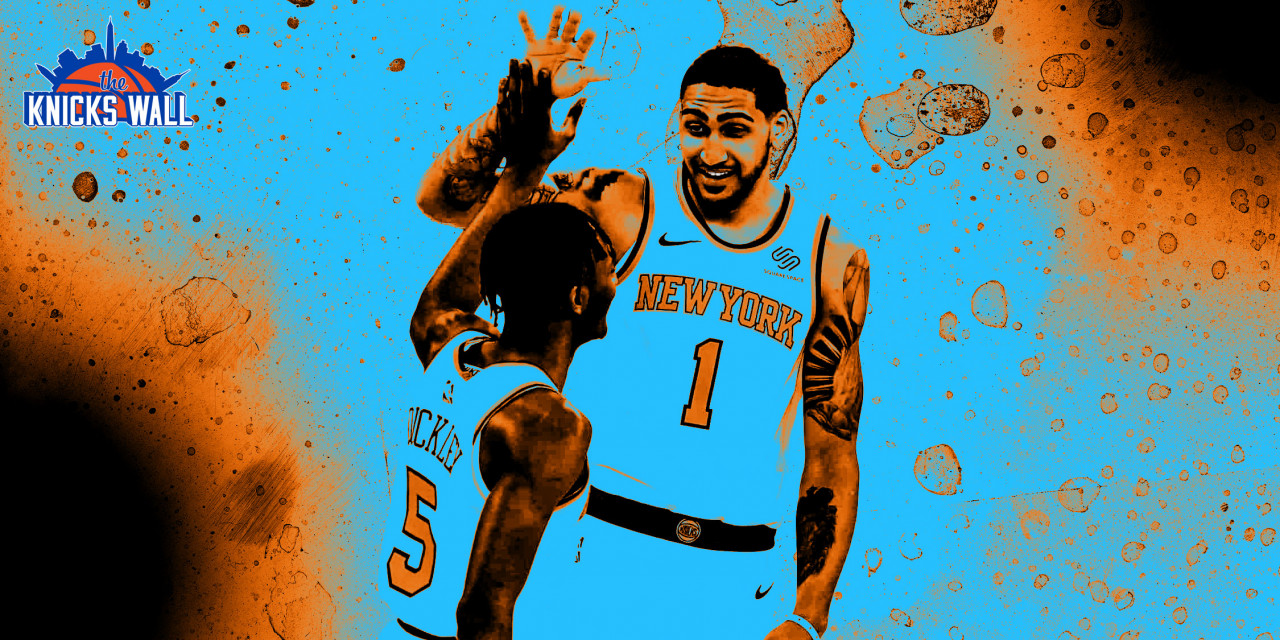 After establishing themselves in a playoff team’s rotation as rookies, Obi Toppin and Immanuel Quickley have more room to grow and establish themselves as key pieces to the Knicks’ future.

The 2020-2021 season was an exciting and interesting one for rookies Obi Toppin and Immanuel Quickley. As the no. 8 overall pick in the 2020 NBA Draft, 22-year-old Toppin was supposed to have an immediate impact on the Knicks, as he was dubbed “NBA Ready” by many. As the no. 25 overall pick, Quickley was called a “reach” and someone that many people thought wasn’t going to crack the rotation in his first year.

Ultimately, it was almost the opposite. Quickley ended up being the rookie to breakout, as he ended up on the All-Rookie Second Team, just a few votes shy of being on the First Team. With Quickley’s limitless range, quickness, and ability to heat up instantly, he became a fan favorite and a reserve player who was crucial to New York’s success.

Conversely, Toppin struggled from the jump. He looked like a rookie that was adjusting to the speed of the game and to the NBA three-point line. As a result, his decision-making wasn’t as quick as it should have been, and his confidence wasn’t high. But he still got consistent minutes off the bench the entire season.

However, Toppin’s improvement was clear as the season went on. In the playoffs, he played his best basketball of the season and in the Summer League, he looked like a different player than we had seen all last season, as he averaged 21 points and 8.3 rebounds in the Las Vegas exhibition games.

The overarching points are clear: both Toppin and Quickley have the opportunity to take major jumps in their sophomore seasons. Given the fact that both will be coming off the bench unless there’s an injury, they will be major reasons for the Knicks having one of the deepest benches in the NBA. Let’s jump into expectations for each of them this season.

Toppin averaged just 4.1 points and 2.2 rebounds in his rookie season while shooting 49.8% from the field and 30.6% from behind the arc. If you break it down month-by-month on Basketball-Reference, the per-game stats don’t look all that different, but the shooting percentages do.

Another major improvement to look for with Toppin this season is his aggressiveness on the offensive end. Toppin only took 3.4 shots per game last year, which is extremely low, even for someone playing only 11 minutes per game. This is a guy that was expected to be extremely productive on offense off the bat, so it was surprising to him not to take a lot of shots last season.

The play above is from the first preseason game. Toppin had no problem getting to the rim in a 1-on-1 situation here. Last season, he probably never even tries to take that defender on and just passes the ball out. If Toppin remains this aggressive during the regular season, it’s just another player that the opponent has to worry about defending and therefore will open up things for other players on the bench unit.

Overall, the expectation should be for Obi Toppin to take a big step forward in terms of efficiency and aggressiveness this year. If the per-game stats still aren’t great but he’s efficient, he’ll be considered an important part of this Knicks young core going forward.

The expectations for Quickley and Toppin are certainly different. With IQ, we’re talking about a player who has legitimate star potential based on what we saw from him last year.

He averaged 11.4 points in just 19.4 minutes per game. That’s 21.2 points per 36 minutes. Quickley’s game is perfect for the modern NBA, as he can shoot from deep, shoot off the dribble, and already has a top floater game in the NBA. The main question is how Quickley is going to show improvement from last season without starting. His minutes may go up from last season, but probably not by much given the fact that Kemba Walker and Derrick Rose will be controlling the point guard position.

Quickley needs to show that he can not only shoot but also pass at a high enough level to play point guard in the future. We saw him do this in the Summer League, and if you watched the Knicks last season, then you know he’s capable of doing this despite only averaging 2.0 assists per game. However, can he show it on a more consistent basis?

With Kemba Walker’s injury history, Quickley may see some games at backup point guard. In the Summer League, when Quickley played point guard, he averaged 7.8 assists per game. However, his shooting percentage was 33.7%. Is shooting percentage something that is going to suffer when Quickley plays at the 1 instead of at the 2? The Summer League was only a five-game sample size, so it’s hard to tell if that’s actually the case.

The “Quickley can’t pass” narrative is beyond dead. pic.twitter.com/xSEs3lgxcd

That being said, Quickley only shot 39.5% from the field last season despite shooting 38.9% from three. This was largely because of inconsistency in his performances and his high volume of three-point attempts, which accounted for more than half of his shot attempts. He had some brutal shooting games, which brought down that overall shooting percentage.

The key for Quickley this season will be to be more consistent in terms of shooting the basketball, as well as showing flashes passing the ball when given the opportunity to run point guard. If he can improve on those aspects of his game, then the sky’s the limit for Immanuel Quickley.