Projecting Ceilings and Floors for the Knicks’ Young Core 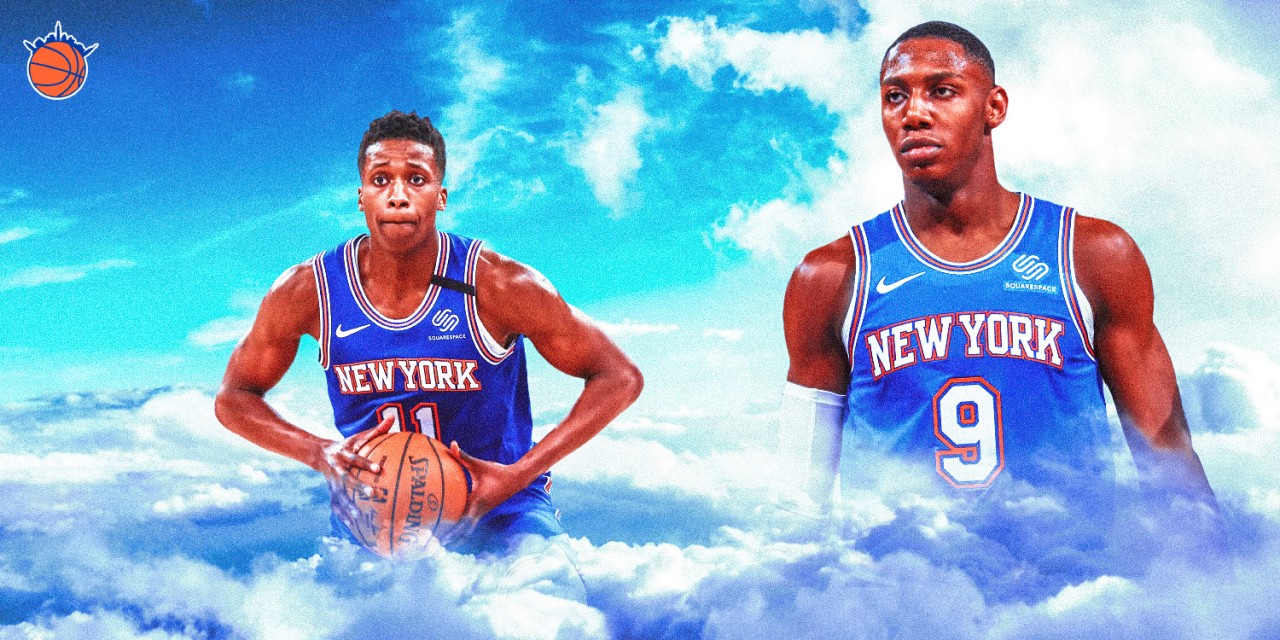 Part of the future of the Knicks depends on the development and success of their young core: RJ Barrett, Mitchell Robinson, and Frank Ntilikina.

The New York Knicks are currently 21-45 and once the season officially ends—whenever that may be—it’ll mark the seventh straight year that they have missed the playoffs. While the roster is far from competing any time soon, there are three players that Knicks fans and outsiders consider to be part of the future and the young core: rookie swingman R.J. Barrett, second-year sophomore Mitchell Robinson, and third-year guard Frank Ntilikina.

Whether new President of Basketball Operations Leon Rose decides to keep these three players heading into the 2020–21 season is yet to be determined, but it’s likely that this is this trio is the glimmer of hope for the Knicks.

DeMar DeRozan was my player comparison for R.J. Barrett at the time of the draft last year. While that comparison may not seem as accurate after watching Barrett’s rookie season, there’s still a path to it. That being said, Barrett has a long way to go before he is firmly on that path.

One thing that Barrett has going for him in terms of this comparison is that he and DeRozan both possess that natural scoring ability. Barrett averaged 14.3 points per game this season as a 19-year-old rookie. That’s nearly six more than DeRozan did in his rookie season (8.6). Additionally, both players have the skill of creating their own shots and getting to the rim with ease.

While both players are skilled at shot creation, both have struggled from beyond the arc. Barrett is shooting 32% from three-point range this season, while DeRozan’s career average is 28.3%. I don’t expect Barrett’s strength to ever be his three-point shot, even if his percentages from distance end up being higher than DeRozan’s. It’s a different game now than it was when DeRozan entered the league.

The major gap separating Barrett and DeRozan right now is efficiency. A major reason why many are skeptical about Barrett going forward is because he’s only shooting 40.2% from the field and 61.4% from the free throw line in his rookie season.

DeRozan has been extremely efficient for most of his seasons in the NBA. In his rookie season, he shot 49.8% from the field and this season, he’s shooting 52.6%, a career-high. His career field goal percentage is 45.7%.

Furthermore, according to the chart below, the in-depth shooting percentages from Barrett and DeRozan’s rookie years show that Barrett has struggled far more than DeRozan did in nearly every single category.

Barrett has failed to shoot over 30% on any shot between three feet and the three-point arc and has just barely eclipsed 30% on jump shots.

If Barrett wants to become an efficient, successful scorer in the NBA, this is something on which he’s going to have to improve tremendously. If he does improve his jump shot, then getting to DeRozan’s level is feasible.

Additionally, it can’t be overlooked that Barrett was put in a poor situation in year one. The roster was constructed with no shooting, leading to extremely bad spacing, which is not ideal for a player like Barrett. He was also underutilized as an initiator and playmaker. Going forward, it’s important that the Knicks invest in players that will fit in with Barrett, and hire a coach that’s going to get the most out of him.

Even if R.J. Barrett only slightly improves his shooting efficiency and jump shot, he still has enough talent to stick around in the league for a while as a bench scorer. It’s not the perfect comparison, but Kent Bazemore comes to mind.

Bazemore’s a journeyman who’s provided several teams with valuable minutes off the bench. I think that if Barrett doesn’t live up to his potential, a role similar to Bazemore’s will be his worst-case scenario.

It’s extremely hard not to get excited when thinking about what the future holds for Mitchell Robinson. Robinson’s a crazy athlete who has the ability to catch a lob 12 feet in the air or block a fadeaway mid-range jumper that less than one percent of the league would be able to get a finger on.

Robinson ranked second in the league in blocks in his rookie season season, averaging 2.4 blocks per game in only 20.6 minutes per game. This season, those block numbers are down to 2.0 per game in 23.1 minutes, but his scoring and rebound improved.

When Clint Capela was at his best, he was catching lobs from James Harden and averaging 16.6 points per game and 12.7 rebounds per game (2018–19). It’s easy to envision Robinson playing that same exact role if the Knicks get a really good distributor at the point guard position. The fact that the Knicks currently don’t have that is something that’s holding Robinson back a bit.

Robinson is only in his second year in the league and is still a bit raw. While being raw, he manages to make these ridiculous plays that you just don’t see often and that’s due to his insane athleticism. If Robinson can cut down the fouls and play around 26-28 minutes per game next season, I think we’ll see him take a major leap.

It’s also important that the Knicks start Robinson at center unlike this season, so he can get experience playing against opposing starting centers. Worrying about foul trouble is a valid concern, but starting Robinson needs to be a priority.

While some may cringe at this comparison, it’s not a bad floor at all. In JaVale McGee’s prime, he was averaging over 11 points per game, approximately eight rebounds per game and over two blocks per game.

McGee is extremely long and athletic just like Robinson. However, there’s no doubt that his basketball I.Q. has held him back throughout his career. That’s one of the only fears I have with Robinson going forward.

If Robinson can never become a disciplined defensive player, then what? He’ll never reach his full potential, that’s for sure. That’s why I think JaVale McGee is a solid floor comparison for Mitchell Robinson.

Many Knicks fans will die on the hill that Frank Ntilikina can turn into a solid NBA player if he can develop some semblance of a consistent offensive game. That’s definitely possible, but right now, through three years in the league, he hasn’t done that.

However, what Ntilikina has done is prove that he can be a tremendous asset defensively. We’ve seen Ntilikina lock up some great players on important possessions, and that’s something he’ll always have going for him.

In addition, Ntilikina is a solid passer and good decision-maker. As a result, his on-off this year is a +4.8, meaning the Knicks are better with him on the court.

In Ntilikina’s last eight games of this season, he did find a bit of an offensive groove averaging 9.4 points per game on 44.8% from the field and 40.0% from deep on 3.1 three-point attempts per game. If he were able to do that throughout an entire season, he can become a glue guy and defensive pest for the Knicks.

That’s why his ceiling is early-2010’s Lance Stephenson. Stephenson was so important to those Pacers teams and the main reason why was because he was a great defensive player, a solid passer. However, with how little we’ve seen from Ntilikina offensively through three years, this is an absolute best case scenario, and almost entirely contingent on his offensive development.

If Ntilikina’s offense doesn’t improve, it’s going to be hard for him to stick around in the NBA. Through three seasons, he still hasn’t shot over 40% from the field or over 33% from three-point range. Additionally, he his career high in points per game for a single season is 6.3, which happened this year.

I still believe in Frank Ntilikina and think the Knicks have botched his development big time by giving more minutes to players like Jarrett Jack, Emmanuel Mudiay, and Trey Burke. However, if and when he does get his chance, he can be a solid player. If he doesn’t get his chance, and continues to be absent offensively, then it’ll be tough for him to stick around in the league.

One of the most important aspects of Barrett, Robinson, and Ntilikina growing as a trio is organizational recognition. While it’s on the players to improve their individual games, it’s on the front office to put the pieces into place to make this work at its maximum potential.

The trio of Barrett, Robinson, and Ntilikina only played 155 minutes together all of this season, which was the 57th most common three-man lineup used by the Knicks. Leon Rose needs to hire a head coach who’s going to cater to the young players rather than the veterans on short-term contracts. He also needs to build a roster to gel with the trio.

The 2020 offseason is going to be a crucial one for the Knicks. Between hiring a head coach, the draft and free agency, there are certainly moves to be made that can accelerate this rebuild and bring New York closer to competing for a playoff berth. Much of that revolves around building around R.J. Barrett, Mitchell Robinson, and Frank Ntilikina.