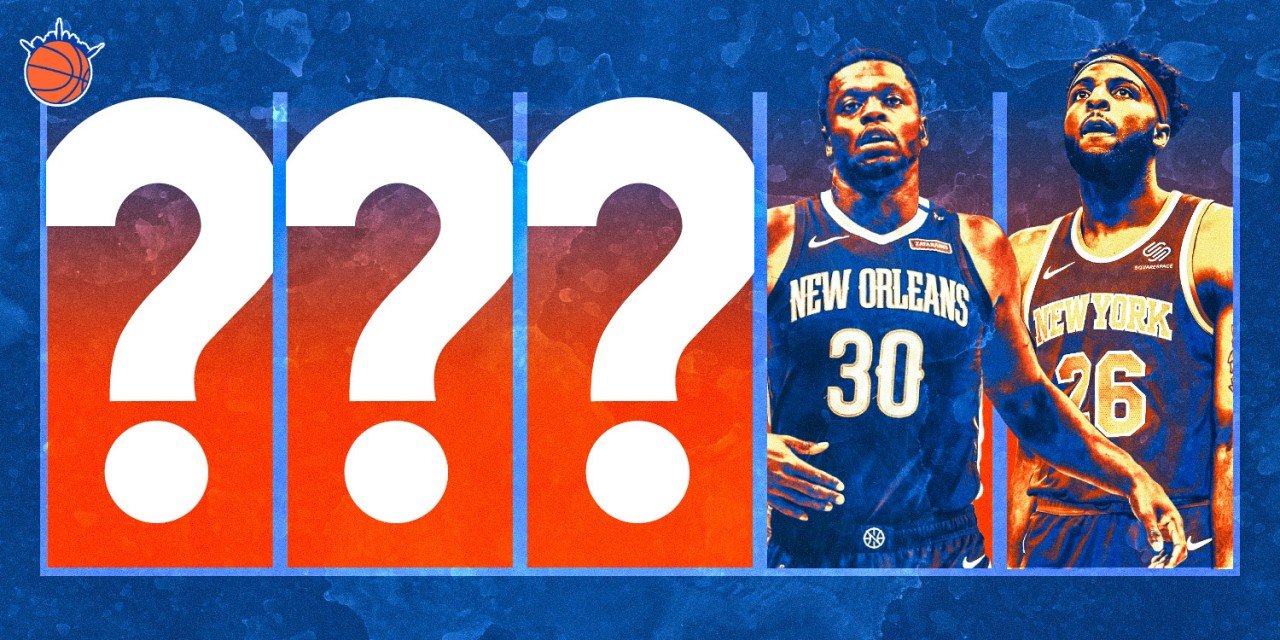 David Fizdale and the Knicks have several positional battles, like at small forward, to decide before finalizing the team’s starting lineup.

It was a largely underwhelming offseason for the Knickerbockers, as they struck out on the available superstar free agents. Ultimately, the Knicks’ summer was characterized more by quantity as opposed to quality. They added a plethora of fresh faces to their roster, inking Reggie Bullock, Wayne Ellington, Taj Gibson, Julius Randle, Marcus Morris, Elfrid Payton, and Bobby Portis to deals, and giving this super young team an infusion of savvy veteran talent.

The current roster, filled with a healthy mix of young and experienced talent, is an interesting group of players. David Fizdale looks to rely on the young guns to play with high intensity pace, with the vets there to teach, play winning ball, and serve as a model of toughness for a Knicks team that has been pushed around in recent memory.

With many new guys in the building, it will be interesting to see who gets the nod on opening night. Let’s take a look at who is likely to be part of the first five when the Knicks open the season in a few weeks against the Spurs.

The 24-year-old was the best free agent signing of the offseason by the Knicks, and to not put Randle in the starting lineup on opening night is foolish. Randle is undoubtedly the best player on the team and had a career year last season, averaging 21.4 points and 8.7 rebounds per game, per ESPN Stats.

Somehow, despite averaging 21 & 9 last season, @J30_RANDLE is going to have a breakout year this season.

At the power forward position, Randle exudes excellent scoring ability around the basket, is tough as nails, and rarely makes mistakes. He has improved his game every season in the NBA and has been open about his desire to compete and thrive in the Big Apple.

Randle will prove to be a potent interior offensive threat the likes of which the Knicks haven’t had in quite some time. With Randle making a lot of money and some saying he was overpaid, expect him to come out of the gates firing with a huge chip on his shoulder, ready to lead the Knicks back to relevant basketball once again.

Robinson has already established himself as one of the elite shot blockers in the NBA at only 21 years of age. Out of all the young guys on the roster, I personally am most excited to watch his upcoming season.

Robinson is a bona fide defensive stopper in the middle and showed flashes of great offensive potential last season, with his freakish athleticism on display on many occasions. His game complements Julius Randle’s, as Randle is a more refined and polished offensive threat, while Robinson excels defensively.

Mitchell Robinson shooting threes after practice. He made 3 in a row after I stopped filming pic.twitter.com/Pzx0OhoCHS

Recently, we have seen videos pop up on social media of Robinson working on developing a three-point shot, so it’s evident he is determined to improve his skill set coming into his second year in the NBA. At this point, it makes much more sense for Robinson to start over guys like Bobby Portis and Taj Gibson. Robinson is the future, and we largely know what Portis and Gibson are at this point in their careers.

Talk about high upside and unfathomable athleticism. Smith has the qualities to be one of the most electrifying players in the league and brings an infectious energy every time he’s on the floor. Despite what some people might want to tell you, Smith is the best point guard on the current roster and absolutely deserves to start.

Smith does have his flaws: he is turnover prone and not that great of a shooter, but he’s still only 21 and has the potential to be a complete offensive threat running the point.

Sure, there will be growing pains and some head-scratching plays with Smith on the court, but I’d much rather have him learn and play over Frank Ntilikina, whose ceiling is much lower—or Elfrid Payton, who has proven do be an average point guard, more suited as a back up.

Morris will probably get the nod to start over Kevin Knox at the wing. Should be starting over Knox? No.

Morris is an excellent role player and one of the most physically imposing and grittiest players in basketball. He is a flat-out winning player who can teach so much and score the ball at an effective clip. However, Kevin Knox should be starting over Morris at the beginning of the season and be given every chance to earn it.

Knox had an up-and-down rookie year, but added some significant muscle in the offseason and has fine tuned his three-point shot. Knox often looked timid and hesitant last season offensively, so I believe giving him a vote of confidence by starting will go a long way in getting him on the right track to stardom.

Despite the influx of veteran talent like Morris, the primary focus of this team should be to develop the young guys, while also putting an exciting product on the floor. Morris would make the lineup more formidable in the short term, but it’s not about the short term for the Knicks. Morris can function as a great sixth man on this team, and he can have an impact wherever he plays, but getting Knox that confidence boost and giving him a chance to start opening night would be ideal.

Barrett perhaps has the highest ceiling of anyone on the roster, and Knicks fans are itching to see him in action. Barrett has the potential to be an elite scorer; he has the work ethic, the attitude, the physical tools and the skill set to be a great great player. Sure he’s been inconsistent, but with more reps and familiarity with the NBA game, he will work out the kinks and become a better player.

Barrett should start right away based on how high the Knicks decided to select him. Clearly Scott Perry and Steve Mills think this guy can be a transcendent player—so why restrict him? We’ve seen many rookies come into the Association and make an immediate impact while growing simultaneously, and Barrett has a good chance to do that.

In an ideal world, I would like to see an all under-25 starting lineup. Developing talent and giving these younger guys more floor time is only going to make them better, setting the franchise up going forward for potential free agency. While veteran signings like Morris and Bullock are nice. they aren’t here on long-term contracts, and we largely know what they bring to the table. Giving these guys minutes off of the bench is fine, but the Knicks should be focused on the future—and the future is not Taj Gibson and Elfrid Payton. It’s guys like Smith, Barrett, Robinson, Knox, and Randle.