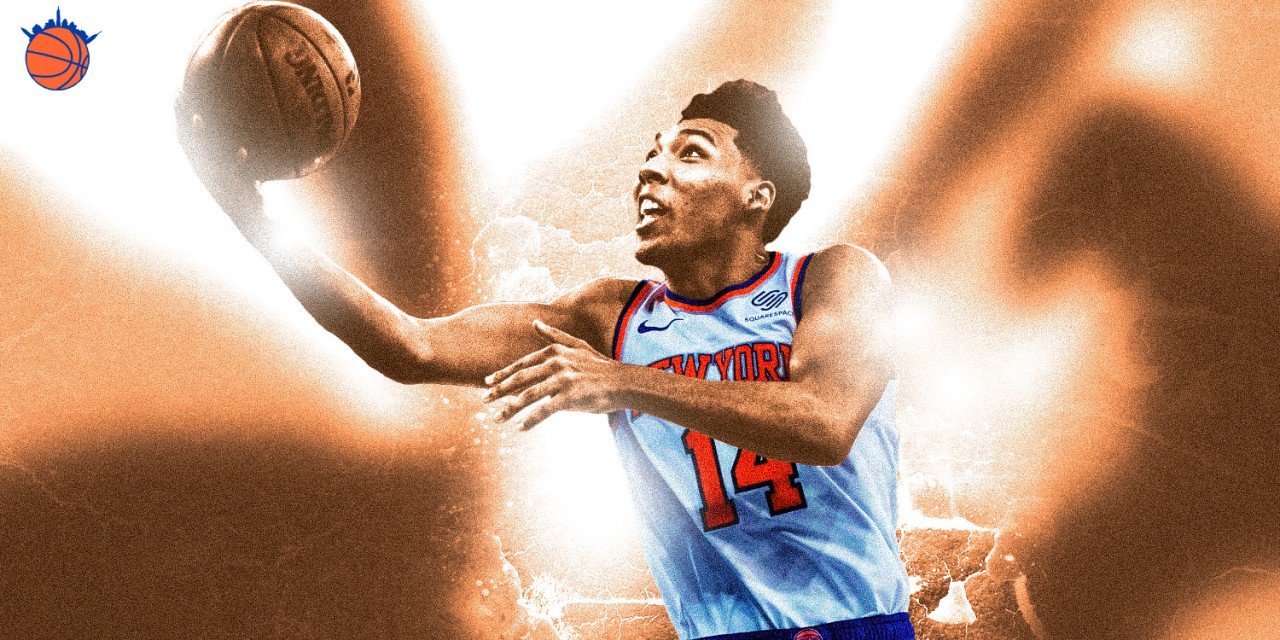 While undrafted rookie Allonzo Trier has displayed a walking-bucket type spark plug off the bench, the Knicks still haven’t quite figured out how to use the Arizona product.

Much of the buzz surrounding the Knicks’ hiring of head coach David Fizdale involved the implementation of his “position-less” offense. While Fizdale often noted that he wouldn’t put players “in a box,” with 18 games left in the season, there is no doubt the term “position-less” is more of an extension of his own basketball philosophy than it is an actual on-court tactic.

Although Fiz has experimented with a bevy of small-ball lineups, there are certainly still traditional constructs by which he adheres. Still, you’ll oftentimes see guys like Noah Vonleh, a power forward/center, Kevin Knox, a 6’9″ forward, and, to a less-surprising extent, guard/forward Damyean Dotson, push the ball up the court at any given moment.

Essentially, Fizdale’s philosophy is: if you get the rebound, and you physically know how to dribble, push that bad boy up the court as fast as you can.

Obviously, you can see, this philosophy has worked to, uhh, varying degrees at best. But there is no question that the Knicks’ personnel shoulders a large chunk of the blame for some of the atrocities we’ve witnessed this season. That’s not even necessarily a knock on their abilities—they’re young and need time to be groomed.

However, one player who has been a surprisingly intriguing—and effective—piece in Fizdale’s offense is undrafted rookie Allonzo Trier, who has managed to work his way up from a projected G Leaguer on a two-way deal to a legitimate rotational piece earning a record-setting contract for a non-drafted player.

But what exactly are Trier’s future prospects on a team that, by and large, has failed to even live up to the minuscule expectations set for them at the beginning of a rebuilding year? Is he just a product of the old “putting up good numbers on a bad team” mantra?

Is Trier a Diamond in the Rough?

If you look at Trier’s numbers upon first glance, they’re solid, but, not necessarily eye-popping: in 22.8 minutes of play, Zo is averaging 11 points per game, shooting 45.5 from the field, 41.3 percent from three (O.K., that one might be eye-popping), 3.1 rebounds, and 1.9 assists. He’s also shooting an ultra-impressive 80.9 percent from the line.

But when you really look into Trier’s numbers—especially given the production of other rookies in his class—you’ll see a much clearer picture of the type of player he really is.

Per 36 minutes, Trier is averaging 17.3 points per game. While that statistic is somewhat fleeting considering it doesn’t take into account fatigue, foul woes, and general player depreciation, amongst other key factors, it still shows that Trier is a legitimate NBA scorer.

Since the All-Star break, he’s third to only Trae Young and Luka Doncic in total points with 126 points. Don’t forget that high draft picks like Deandre Ayton and Collin Sexton also exist, and are also playing exceptionally well. This puts Trier’s production in a whole different lens—he’s keeping up with some pretty notable players in his draft class.

Trier’s bread and butter has been his isolation—he’s currently sporting a 20.3 percent usage rate, with 65.4 percent of his points coming unassisted this season. In short, he’s great at getting baskets on his own. Like, really great.

But what has truly been remarkable is just how efficient he’s been for the majority of the season, despite primarily being an isolation scorer.

While his near-46 field-goal percentage and 41.3 three-point percentage are both impressive in their own rights, one could argue that they’re actually somewhat misleading, given just how dreadful Trier was when he came back from injury.

In the nine games following his return from a hamstring injury—an ailment that certainly impacts a player’s rhythm on the court—Trier shot a ghastly 30.5 percent and averaged 4.9 points. Those shooting woes appear to be an anomaly, considering his performances prior to and after that stretch.

Trier isn’t just a great isolation scorer—his scoring versatility has put him in a league of his own. His spot-up shooting has also looked pristine as of late, which has been the case for the majority of the year. In fact, it’s actually a pretty underrated aspect of his game and something that bodes well for his longevity in today’s NBA. Trier has been hitting catch-and-shoot threes at a remarkable clip—he’s currently at 62 percent on assisted threes.

Another underrated part of Trier’s inaugural season has been his positional versatility. At the beginning of the year, he looked like someone who would be entrenched at the two-guard spot. This hasn’t necessarily been the case—Fiz has rolled out lineups with Trier at both the one and even the three.

This is where the whole “position-less” offense comes into play. While Trier isn’t your prototypical lead guard, he’s able to come in as an extra ball handler, and is able to D up the opposing point guard. In a perfect world (something the Knicks certainly aren’t living in), Fiz can put Trier at that spot a little more often, so long as the ball doesn’t stick.

That is one glaring weakness Trier has to work on—when the ball is in his hands, he tends to get tunnel vision going to the rim. He doesn’t look to pass out of his drives, which results in offensive stagnation. But so far, he’s shown the ability, at 6’5″, to defend multiple positions, which jacks up his value on the court.

Speaking of his defense, Trier isn’t necessarily great, but he isn’t a glaring hindrance. Considering the overall ineptitude of the Knicks on that side of the court, Zo hasn’t stood out as someone teams look to exploit. For the most part, he’s engaged on that end, but simply lacks the size and experience to qualify as a plus defender. However, after a few years of coaching, along with some added bulk, Trier should improve. At the very least, it doesn’t look like he’ll be a defensive liability.

How he Fits into the Knicks’ Plans

With all things considered, how does Trier fit into the Knicks’ future plans? As a versatile player, capable at sliding in the one, two, or three, Trier’s highest value would be coming off of the bench as a spark-plug scorer. Think a younger, bigger Lou Williams. A more reasonable comparison would be a guy the Knicks once utilized on the court, and now employ in the front office—John Starks.

Trier could be everything Knicks fans truly wanted out of Tim Hardaway Jr.—a lethal, microwave scorer who can come off the bench and carry the load for the second unit, while also playing valuable off-ball minutes with starters in crunch time. Unfortunately, due to Hardaway’s albatross of a contract, that wasn’t an option for coach Fiz, and understandably so.

The edge that Trier has on Hardaway is efficiency. If you compare their rookie years, Trier has Hardaway beat in nearly every significant offensive category. On a far better team (one that fell short of making the playoffs, but still), Hardaway averaged 10.2 points on 42 percent shooting, 36 percent from deep, to go along with 0.8 assists per game and 1.5 rebounds. Hardaway even played slightly more minutes—just over 23 a game—than Trier. Hardaway Jr., to his credit, has improved his all-around game, but he’s clearly a better fit coming off the bench as a third or fourth option. This seems like a reasonable projection for Trier, but luckily for him, he’s already ahead of Hardaway’s trajectory following his own rookie season.

There are obviously a few areas where Trier can improve to be an effective piece on an improved roster. He’s going to have to move better off the ball, keep his head up while driving to the rim, and become a more engaged—and savvy—defender in space. But for a rookie, he’s certainly making his mark in the league—as well as in the hearts of Knicks fans clinging on to any sort of non-lottery silver lining over the course a lost season.