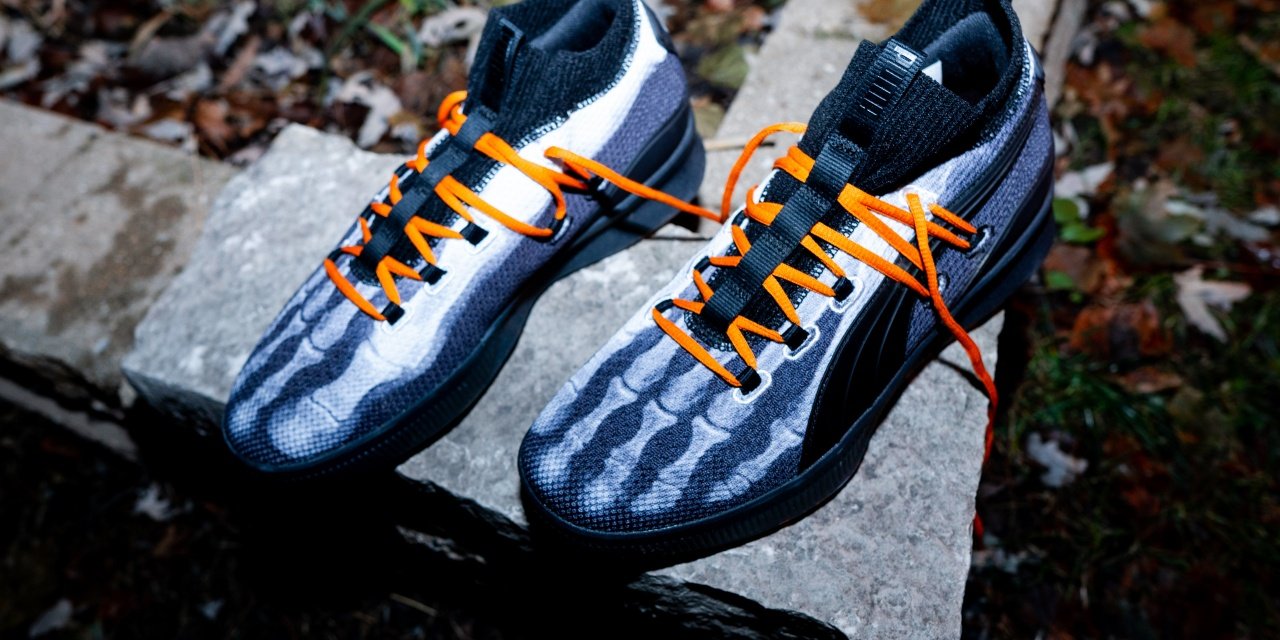 Anthony Corbo breaks down the newest basketball shoe to be seen gracing the NBA hardwood on the feet of players like Kevin Knox, DeMarcus Cousins, and many more.

In July of this year, Kevin Knox sent shockwaves through the Knicks fanbase by signing a deal with PUMA and becoming a part of the initial wave to debut the German shoe brand’s first basketball sneaker in over 20 years, the PUMA Basketball Clyde Court. Paying homage to the New York legend and most iconic PUMA athlete of all time, Walt “Clyde” Frazier, Knicks fans everywhere immediately took notice of the interesting orange and yellow sneaker Knox rocked during his debut and subsequent torching of the Summer League.

And it wasn’t just Kevin Knox! Suddenly, many of the league’s biggest stars and most highly touted prospects began to show up with orange and yellow Clyde Courts on. Number-one overall pick Deandre Ayton, next pick Marvin Bagley III, and fellow lottery choice Michael Porter Jr. were all making an impact on the court and putting on a display as they did so.

The NBA’s decision to relax its restrictions on shoe colorways allowed PUMA Basketball, led by Creative Director Jay-Z, to pounce on the opportunity to establish themselves in the basketball world by outfitting all of their new signees with matching orange and yellow Clyde Court designs, the “Disrupt.”

Now an unquestionable member of the basketball marketplace, PUMA Basketball has expanded their design options available for purchase. The second design option to be released was the “X-Ray,” a bold, skeletal take on the Clyde Court. PUMA Basketball sent several pairs of the Clyde Court X-Ray to members of The Knicks Wall earlier this week for us to take a look at, and after rocking them for few days, I can at least promise this review will be thoroughly transparent (read: horrible pun.) 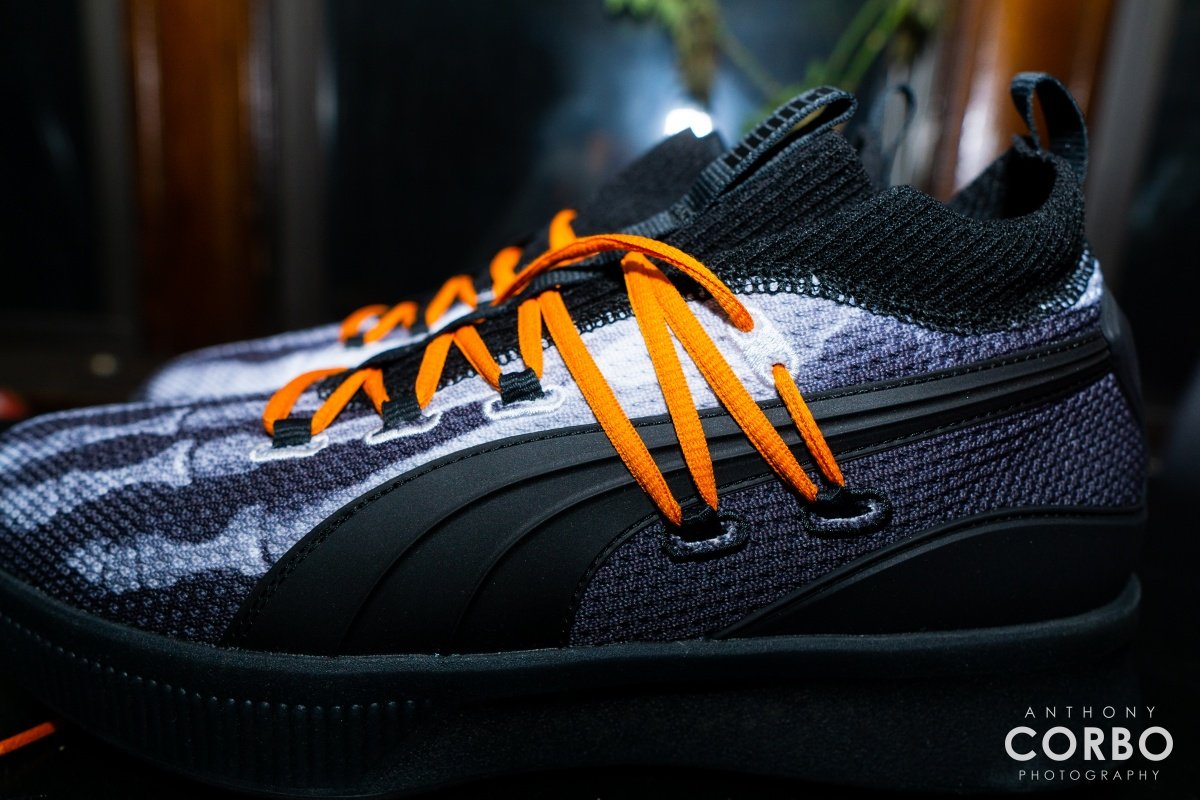 Starting with the appearance of these shoes, the PUMA Clyde Court X-Ray looks absolutely badass. The bone decal makes a nice gradient from heel to toe, gradually getting lighter, while keeping the drop-shadowed effect of an x-ray photograph apparent throughout. I have some concerns over how the decal may fade over time, but overall the look is very striking and has proven to be quite polarizing—let’s say—by fans.

Luckily, not everybody felt the same as @cWhitey_NY.

What Chris doesn’t take into account, however, is how nice all of the small details on the Clyde Court X-Rays are as well. The PUMA stripe along the side is not intrusive on the design and creates a handsome curve as it stretches to the back to meet a rubber shield design with the PUMA logo. Taking an even closer look at some elements, the dual-pull tags feature respective “PUMA” and “1973” decals on the front and back of the top, and the eyelets blend into the bone decal well on the insides, though less so on the outside of the shoe.

However, the nicest touch of all on the Clyde Court X-Ray is the raised “Clyde” signature on the back of the shoe’s base. All of these design elements seem to be central to the Clyde Court’s aesthetic regardless of colorway, a point of encouragement when it comes to future design options or if the striking X-Ray design is not for you.

It should also be noted that while the orange laces provide the Clyde Court X-Ray with a unique pop of color, it can be a bit much for some considering the already loud design of these sneakers. Luckily, PUMA includes a set of black and a set of white laces in the box as well, giving you plenty of possibilities to try out. My pair currently features a white lace on my left foot and black on my right. 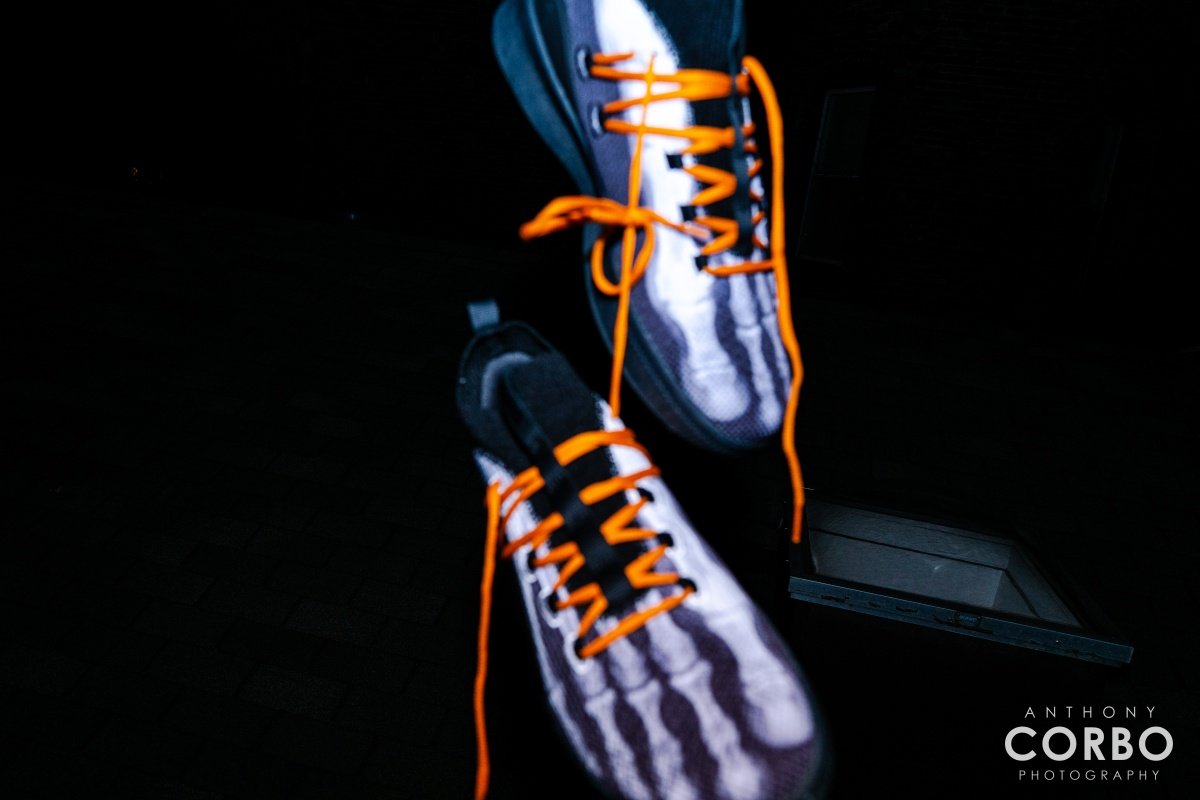 From the moment I slipped these PUMAs on, I fell in love with how easy the dual-pull tag design makes it to slip your foot into. The mesh that surrounds the majority of the sneaker is comfortable as well and fits the foot easily, even if your feet are slightly wider like mine. One detail I really like is how far the laces stretch to the back and bottom of the shoe on both sides, providing some extra heel support that is definitely appreciated.

As I was taking my first steps, the sole and base of the Clyde Court X-Ray was the first thing I noticed. I’ve never worn a sneaker, for basketball or otherwise, that provided quite as much support and shock absorbance as these PUMAs did right out of the box. I could feel the shoe giving me a little extra bounce to my every step while taking much of the impact out of the planting of my feet. At no point did I feel like I was sinking into my base.

Overall, you’ll have no problem wearing the Clyde Court X-Ray on hard surfaces for long periods of time, whether that be for casual street-wear or on a basketball court. The base’s rubber definitely feels solid, and the sole’s stitching is deep enough to where I would say these PUMAs should have no problem holding up to some wear-and-tear.

The only drawback here is that the large base leads to a shoe that is somewhat heavier than most mesh sneakers I’ve worn in the past. The X-Ray’s other rubber appointments throughout the shoe are nice and flexible, and PUMA’s patented stripe even connects with the heel support in such a way that it creates a clever support brace that provides another layer of protection to the inner heel’s support and padding. 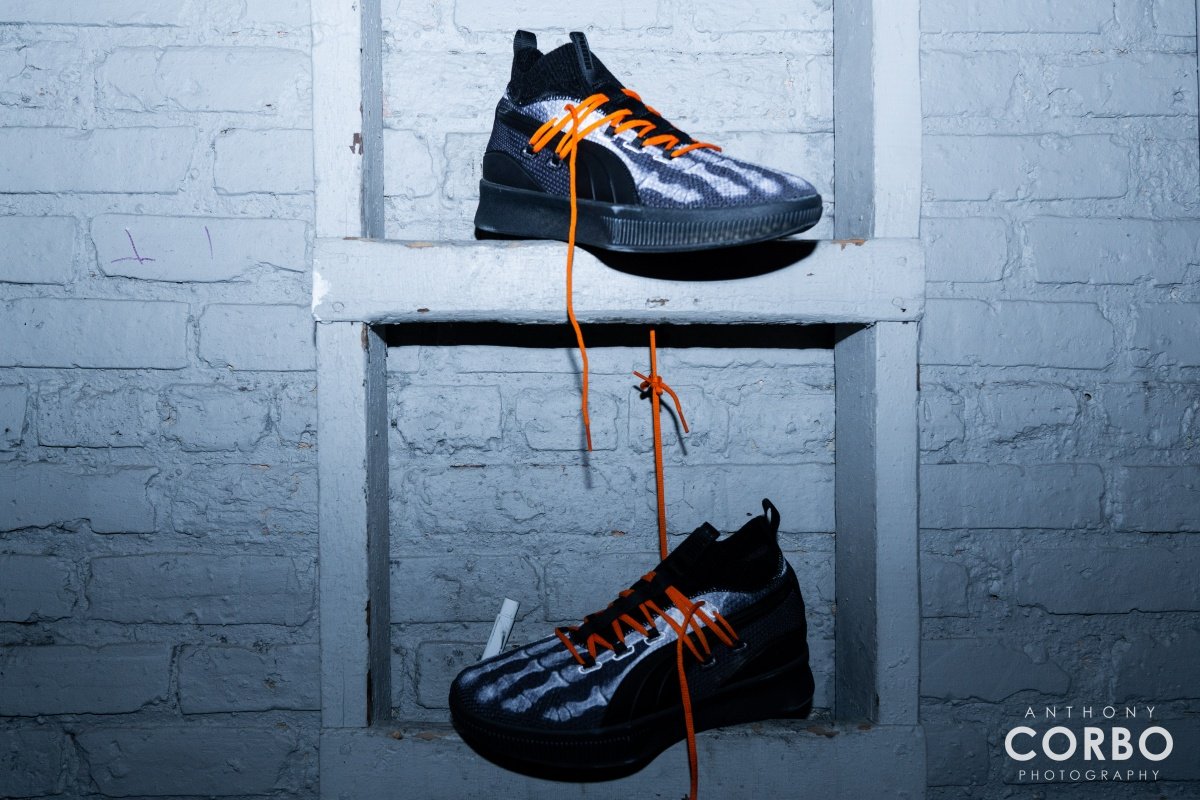 The first thing to note about the PUMA Basketball Clyde Court X-Ray, when viewing it from an on-court perspective, is that they are a low-top basketball sneaker. There’s a lot of question as to how an ankle should be supported on the court and whether low or high top sneakers are more effective. Personally, I’m in the high top camp, but nonetheless, my heels and lower ankles did feel adequately supported by the padding and support of this shoe. The sock-top design made me feel nervous about the higher part of my ankles when driving to the rim and I noticed some slight discomfort when shifting my feet while cutting and stopping short for a jump shot. I wouldn’t presume the Clyde Court X-Ray to be very preventative of moderate or major ankle injuries of any kind, giving me some pause when thinking of the Kevin Knox ankle injury from earlier this season.

On the brighter side of things, I immediately noticed how much less damaged my knees felt when landing after a drive or jump shot thanks to the shock-absorbent base of the Clyde Court, though the extra weight was somewhat noticeable.

Still, something did feel slightly off balance while I was playing, as if I was landing on the wrong part of my foot. It should be noted that I was playing outdoor basketball in December for all of 15 minutes, so these issues could very well simply be a matter of needing to adjust before fully feeling comfortable in these PUMAs. I also noticed a little bit of extra wiggle-room while shifting my feet, and though I’m usually a solid size 10.5, I’d like to give a size 10 a try to see if sizing down would solve many of these issues. At the very least, I’d recommend trying on a pair of Clyde Court X-Rays before committing to them as your next on-court sneak. 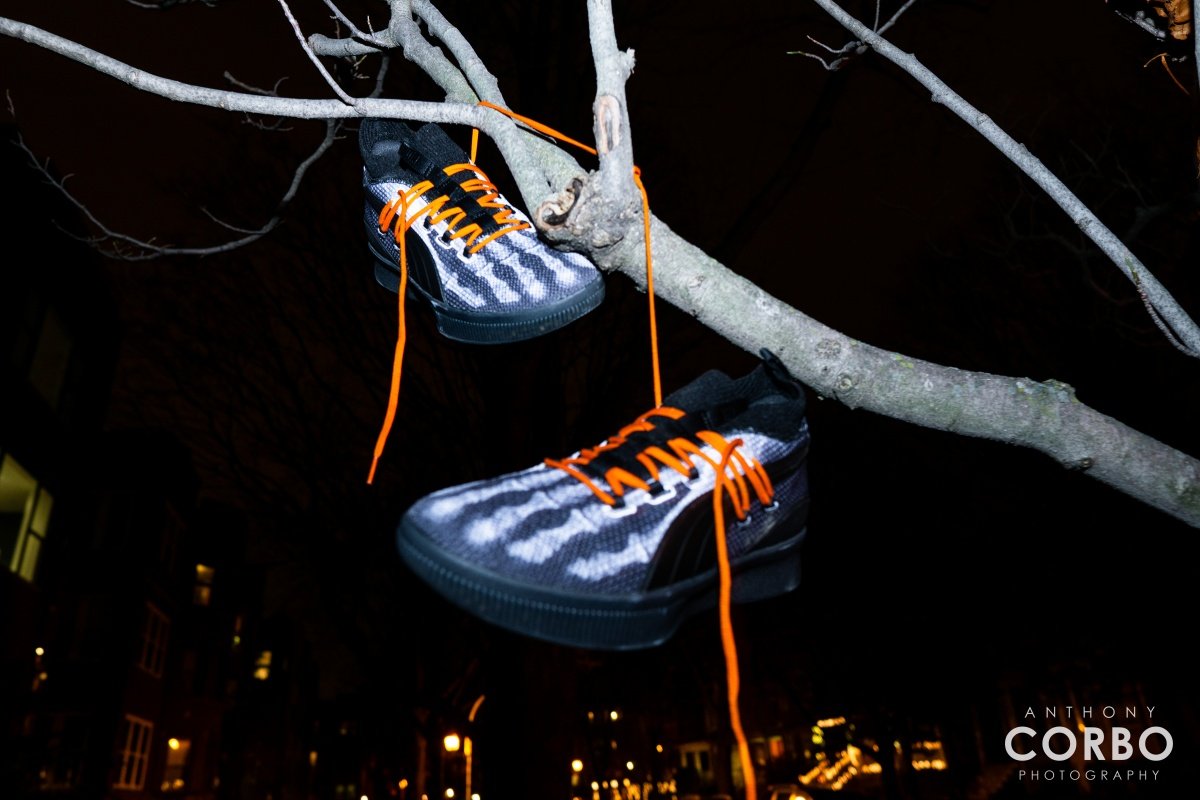 When it comes down to striking looks and casual wear, the PUMA Basketball Clyde Court X-Ray is an absolute winner for me and may just be the most comfortable sneaker I’ve ever worn while commuting around. When it comes to basketball, however, I would definitely recommend trying on a pair first to determine if these are a comfortable fit for you and your playing style. I would still love to try a size 10 as opposed to a size 10.5, as I feel sizing-down a half size could solve many of the support issues I was feeling during my short run in these.