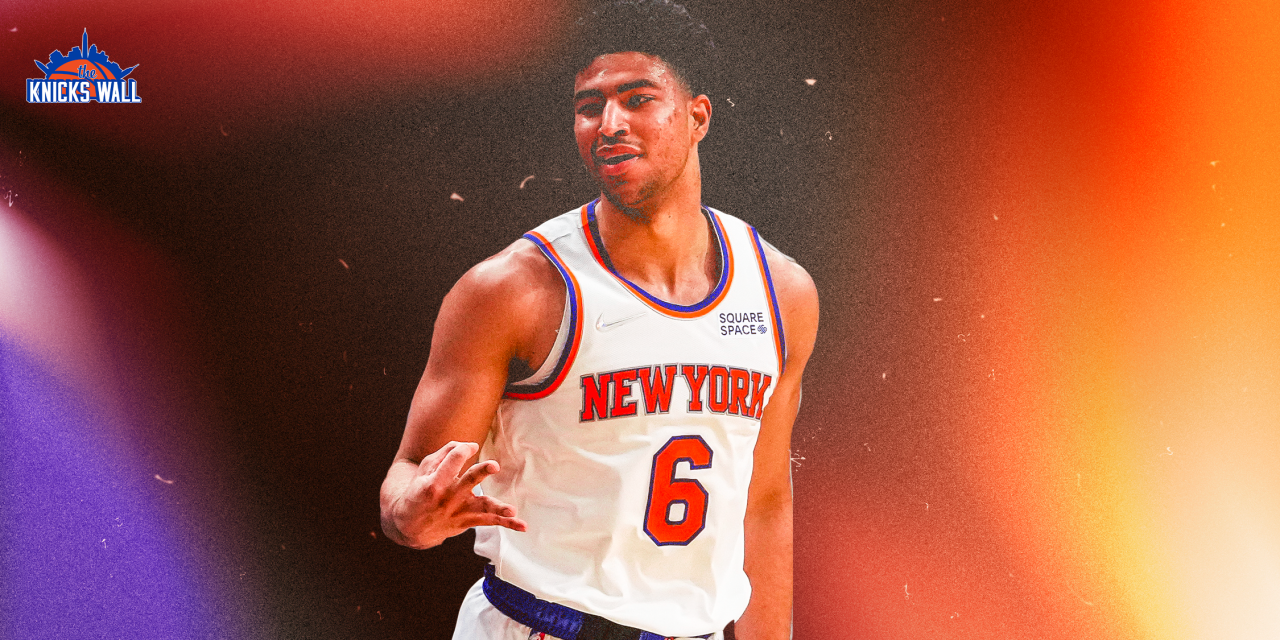 Quentin Grimes was the quintessential 3-and-D guard in his rookie year. Sports performance coach Raymond Brenkert and Tyler Marko return to break down how he can become more.

This season, Quentin Grimes gave Knicks fans exactly what they would want from a rookie taken in the late first round. When given the opportunity, Grimes proved to be a more than capable 3-and-D player for the New York Knicks—the next step for him this offseason would be to improve his ability to get to the rim, facilitate and finish. In a conversation with The Knicks Wall’s Raymond Brenkert, Ben Perkins, who’s been training Grimes since the seventh grade, explained that Grimes has been working on just that, and also explained how he intends to take the next step in his sophomore season.

Like most NBA players, Grimes was asked to do less on his professional team than he ever was before. Whereas some players would and have pouted about a reduced role, Grimes has taken it upon himself to work harder. Following a late January win against the Oklahoma City Thunder, head coach Tom Thibodeau praised Grimes, saying: “He treats practice like a game.”

His catch-and-shoot game, his bread and butter at this point in his NBA career, is a major focal point of his work with Perkins, showing he’s clearly aware that knocking down shots and locking up his man is what is needed and expected of him. However, the pair have also been working on initiating the offense, as well as finishing in the paint; Perkins told Brenkert that when he was growing up, those were the parts of his game that Grimes most enjoyed. So the two have put an onus on ball security, with an assortment of drills to go along with lots of shooting and multiple film study sessions a day.

Grimes proving himself as a competent secondary ball-handler would be a major windfall for the Knicks, who are still missing a true lead facilitator. Having multiple players like Grimes who can orchestrate the offense for a spell off of the bench benefits the entire offense.

Seemingly intent on earning a larger role, Grimes’ previously mentioned work ethic may be his greatest asset on this quest. Watching him in games, relentlessness on the offensive glass—Grimes is in the 72nd percentile in offensive rebounding percentage for wings, per Cleaning the Glass, while only 6’4” tall—feels like the clearest indicator of his current mindset. When he’s not being asked to knock down threes (which were 80% of his attempts) Grimes’ attempts at the rim come on putbacks far more often than they come off drives.

However, to have the opportunity to help the team, Grimes will have to be on the floor. This is why Brenkert, a sports movement and performance coach, would like for Grimes to also work on stabilization. Strengthening the muscles around his knees, hips, and ankles, in particular, would do wonders for preventing injuries, like the right knee subluxation (or partial dislocation) that held him out in late February and early March. Navigating picks, driving to the rim, and cutting laterally all are important parts of Grimes’ game reaching the next level, and all three put a good deal of stress on these lower body joints.

Rarely does the 25th pick make an impact as a rookie, and nothing illustrates his hunger more than the fact that now, when other players might be chalking the year up as a success and heading off to enjoy their first offseason, Grimes is working, intent on being more than the average late first-round pick.