Quentin Grimes Is Deserving of a Shot 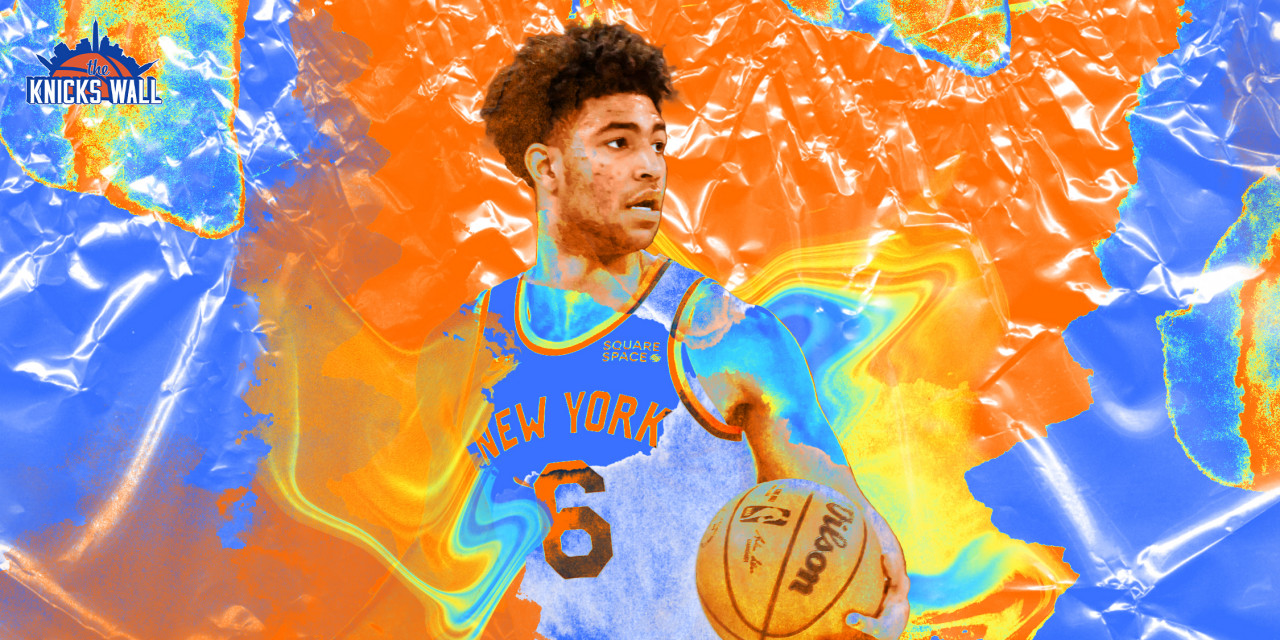 After a stunning display with seven triples in one game, Quentin Grimes rose to the occasion and should see his playing time increase.

After being relatively untouched by COVID-19 last season, some of the New York Knicks’ best players recently came down with the virus. Since the weekend, both RJ Barrett and the analytics darling, Obi Toppin, have been in the league’s COVID-19 protocol. There is no timetable for their return.

Now is an inopportune time for New York to lose two of its top-five talents, even if just for a brief stretch. The Knicks are reeling, having dropped seven of their last eight. The trademark intensity, effort, and swagger of the Thibodeau-led ‘Bockers are nowhere to be found, and the 5-1 start to the season feels like a distant memory. But if there is one saving grace for the pair of Knicks being down for the count, it’s that it has opened up playing time for the young folks up and down the roster. To this point, nobody has made more out of their expanded role than rookie Quentin Grimes, who put together his most complete performance as a pro in a loss to the Bucks on Sunday.

In a team-high 40 minutes, Grimes logged a stat-line of 27 points, three rebounds, three assists, and three steals. He showcased sizzling three-point shooting along with active hands-on defense. Grimes’ all-around display cemented his case for why he should be a rotational mainstay moving forward, even when the Knicks are at full strength.

Grimes did a lot of things well on Sunday, but what truly stood out was his three-point prowess. The lion’s share of his points (21) came from beyond the arc, and he set a new franchise record for a rookie with seven made treys. In terms of spot-up shooting skill, no Knick aside from Evan Fournier (more on him later) matches Grimes. His shooting form is almost tailor-made to thrive in the pros; it is lightning quick, and the lift Grimes gets on his shot ensures he can fire over contests with little problem.

Grimes’ release on catch and shoot threes is special. Consistent load up, gets a ton of lift and releases quickly pic.twitter.com/dZWMVFMz5V

Another aspect of what makes Grimes a deadly spot-up threat other than his mechanics is his ability to create open looks by moving off the ball. Grimes displayed his cutting chops on a number of occasions against the Bucks, as he located holes in the defense and parlayed them into high-percentage looks from deep. Speaking of high percentages, although Grimes has only attempted 32 treys on the year, he’s nailing them at a torrid 46.9% clip.

Here’s a thread of some Quentin Grimes clips to remind everyone he should never be a DNP again pic.twitter.com/8NadCNMHRu

Last summer, atop the Knicks’ offseason agenda was to improve their three-point lethality after they ended near the bottom of the league in attempts. Early on this season, the threes were falling like rain, and it seemed New York had primarily solved their long-range woes, but the team has plummeted back to earth the last 10 games. Over this span, they have been merely a middle-of-the-pack three-point offense, ranking 12th in attempts and 16th in percentage. So why not give (arguably) the best pure shooter on the roster consistent playing time to try to rekindle some early-season success with the long ball?

But for all that Grimes brings as a sniper, he’s capable of contributing in other facets. Blessed with a favorable height (6’4″) and wingspan (6’8″) at the guard position, Grimes uses his measurables on defense to disrupt half-court offenses and force deflections and steals. He’s had a penchant for causing turnovers since his collegiate days—he averaged 1.4 takeaways per game as a senior. Knicks fans got their first real taste of Grimes’ knack for wreaking havoc when he generated three steals against Milwaukee.

Excellent from Quentin Grimes on the steal and then the feed to Randle in this sequence pic.twitter.com/vKldwBb5HZ

The steal above is unremarkable in that it’s rather simple. However, ever heard of the phrase simple yet effective? It epitomizes both this moment and Grimes as a defender. Grimes is hyperaware of where the ball and Rodney Hood (his assignment) are in this sequence. In a split second, he recognizes the incoming pass intended for Hood and slaps it away right before it hits Hood’s fingertips. This play requires great coordination, timing, and quickness to pull off. There’s maybe no other guard/wing on the roster capable of pulling off such a steal, aside from RJ Barrett.

The numbers paint the Knicks as one of the worst teams in the NBA at forcing steals; they average just seven, ranking them 26th overall. Their perimeter defense has been lackluster all season, for reasons discussed ad nauseam in this space.

Grimes’ intelligence and headiness as a perimeter defender belies his years. So extra burn for him could be a stepping stone towards getting the team’s defense back on track, both in the steals department and as a whole. And it’s worth noting that there is a direct correlation between steals/deflections/turnovers and fastbreak opportunities. If the Knicks can improve at turning the opposition over, that means more easy scoring chances for an offense that’s looked like it has been playing in the mud at times over the past few weeks.

Believe it or not, New York’s starting shooting guard spot—also Grimes’ natural position—could be up for grabs soon. Fournier, the current starter, is slowly but surely playing his way not only out of the opening lineup but the rotation entirely. Over his last five games, he’s failed to notch double-digits in scoring once and hasn’t made up for his cold shooting in other areas. Fournier is averaging just one assist per contest during this stretch and has been a human traffic cone defensively.

Tom Thibodeau has long been adamant that his players must earn their minutes. Well, Fournier hasn’t earned his lately. Thus it’s seemingly only a matter of time until there’s yet another tweak to the starting lineup, with Fournier this time getting the boot. And considering Grimes checks two boxes that are all-important to the Knicks’ modus operandi with his three-point shooting and stifling defense, the neophyte is in line to receive serious consideration to be the team’s newest starting 2 guard.

With all that said, fans will have to wait at least a little longer before they get an adequate sample size of Grimes in the rotation. He joined Barrett and Toppin in the league’s COVID-19 protocol on Tuesday. Here’s to hoping all three Knicks recover expeditiously.