Quentin Grimes, Knicks a ‘Match Made in Heaven,’ According to Rookie 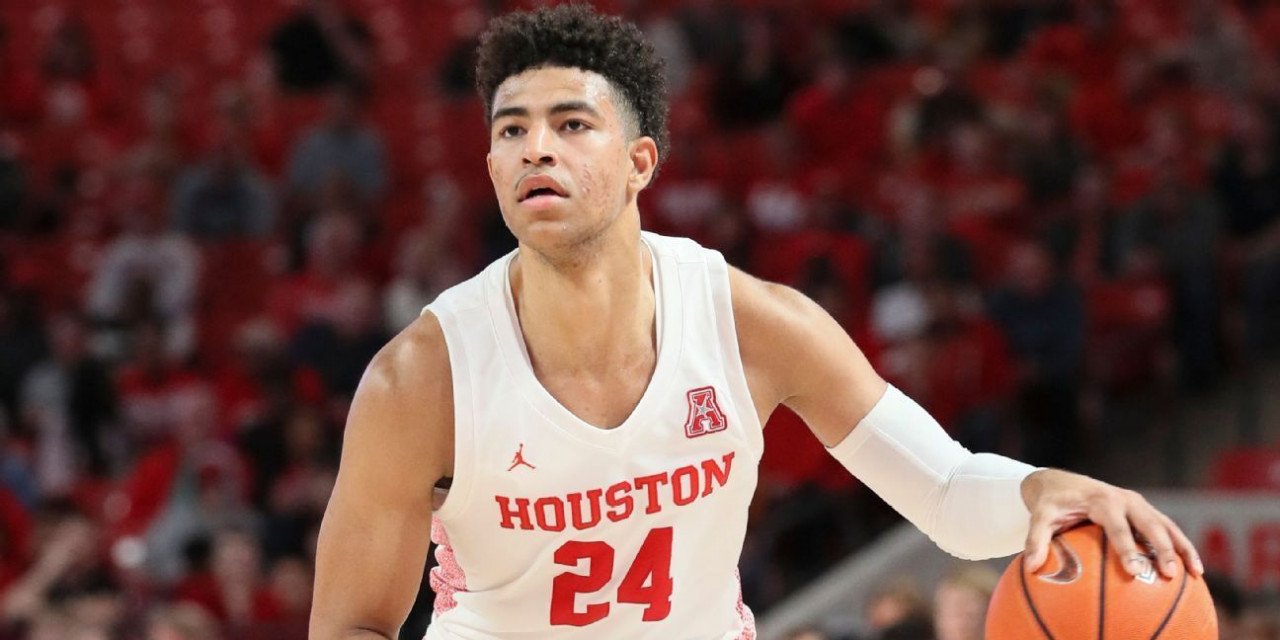 The Knicks drafted Quentin Grimes at 25th overall in the 2021 NBA Draft. The junior from Houston offers skills and toughness that should make him fit like a glove in New York.

NEW YORK, NY — After making trades involving both of their first-round picks, the New York Knicks selected Houston guard Quentin Grimes. The 6-foot-5 21-year-old was a five-star recruit coming into his freshman season at Kansas but transferred to Houston after testing the NBA Draft waters in 2019.

Grimes’ unusual journey created more adversity for him. But he said having those challenges along the way have paid off. “I feel like even though my past was different from what people expected, I feel like it worked out in a favor that I wanted and it was the best outcome for me,” he said on Friday, speaking to media.

In those two seasons as a Cougar, the final of which ended with a run to the Final Four, Grimes rebuilt his draft stock and landed in New York at pick 25, a spot he feels is perfect. After a meeting with Knicks’ brass before the draft, he felt like joining the Knicks “would kinda be like a match made in heaven,” he said, “just that [Coach Thibodeau is] gonna be on you but that they’re building something special in New York and I definitely wanted to be a part of it.”

Grimes said playing under a “tough, hard-nosed coach” like Tom Thibodeau mirrors his time at Houston under head coach Kelvin Sampson. Sampson prides his team on defense and toughness, so Grimes should feel right at home in Madison Square Garden.

I asked Quentin Grimes how he feels about the pick he got drafted at. He said that he feels like he got picked in a perfect spot.

"Some people might say [I was] picked too low or picked too high…I feel like going to New York is going to be a match made in heaven." pic.twitter.com/wjYlDvNM5r

“I feel like I can definitely have an immediate impact shooting the ball at a high level [from deep] and locking down defensively,” Grimes added. “Those are the two things I really pride myself [on] and hang my hat on.” Both skills address two of the various needs for New York to address this offseason.

The Knicks ranked 27th in three-point attempts per game last season, so volume shooting was one need. Grimes shot 8.3 triples per game last season, converting on 40.3% of them. Although the Knicks’ defense was one of the league’s best last season, they got picked apart by Trae Young, a slithery, score-from-anywhere point guard, in the postseason. Adding a stout perimeter defender should help the Knicks address this exploited weak spot.

Although Grimes knows his strength is as a 3-and-D player, he feels like he can be much more. He understands that his skills as a shooter and defender will probably earn him a role as a 3-and-D wing early in his career. “But I feel like I’ll definitely be able to grow into a secondary ball-handler and be able to make plays and facilitate the rock and have a well-rounded overall game,” he says.

The three players Grimes watches the most film on—Jamal Murray, Devin Booker, and Bradley Beal—are all high-level scorers and deep-range shooters that can also create plays for others. Following in their footsteps would make Grimes worthy of All-Star selections. It’s rare that players make leaps to levels like theirs, though—especially those drafted later in the first round.

But Grimes feels like he has the work ethic to get there. He said that in his pre-draft interviews, people asked him why he did a pro day after two games at the Draft Combine. “I feel like I’m the ultimate competitor,” he said. “I feel like that’s another day for me, to go out there and, at that time, prove to all the GMs and all the executives who came to watch me that I’m worthy of [being] a first-round pick.”

»READ: Three international prospects the Knicks should targets in the 2021 NBA Draft