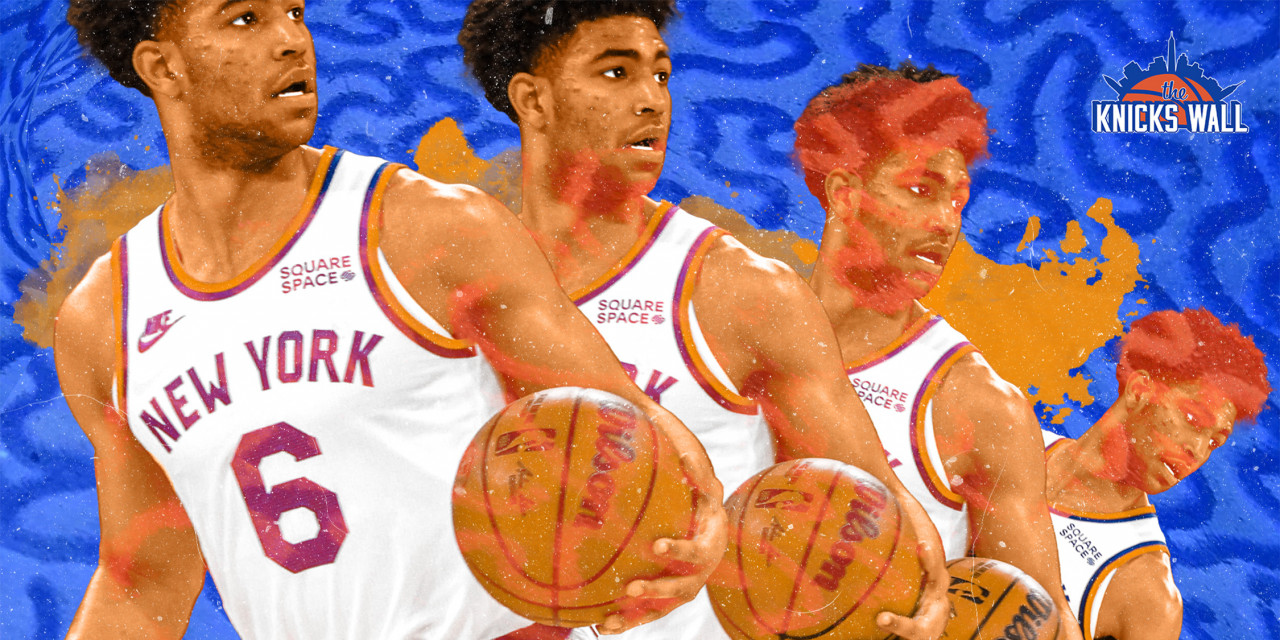 As the Knicks youngsters take a step forward, Quentin Grimes is a prime candidate to earn more minutes and offer New York an important piece to their future core.

For the New York Knicks, we’re rapidly approaching a point where New York’s young players are emerging and it’s time for them to move into a larger role. Honestly, we’ve may already be there. RJ Barrett has taken a larger role in the offense and should continue to get on-ball reps, Immanuel Quickley should continue to play point guard and Obi Toppin, who fell off a bit due to Tom Thibodeau’s confusing usage of him, looked good in recent starts with Julius Randle on the mend.

It offers a bit of hope to an otherwise underwhelming season. Tom Thibodeau will continue to trust his veterans—Randle, through good or bad, will get his minutes and numbers. Alec Burks will see the time anywhere from point guard to small forward and Evan Fournier, who just got paid and with Thibodeau’s blessing, should see considerable playing time, if not, continue to start for New York. Still, the Knicks and Thibodeau would be wise in pushing the four kids with a sizable chunk of minutes for the foreseeable future.

The fourth young talent is Quentin Grimes. Selected with the 25th overall pick, New York viewed him as a young wing who can contribute right away, thanks to his experience between Kansas and the University of Houston. Though his per-game averages don’t suggest it—4.9 points, 38.8% from the field—Grimes looks like an ideal 3-and-D player alongside players with larger usages in the offense.

The argument for Grimes to acquire more minutes is easy: he’s a good shooter, offers solid defensive tools, and doesn’t require a ton of offensive touches to impact the game. Looking at last season’s 41-win team, Reggie Bullock assumed a similar role, which was unspectacular, yet consistent. Off a player like Randle, Bullock was able to be an excellent threat by knocking down threes and playing excellent defense. In the coming years, Grimes can assume a similar role.

Grimes is a good shooter. After two decent seasons, Grimes finished his college career with a 40.3% shooting from the outside. That success has translated into his rookie season with the Knicks. Of his 103 field-goal attempts, 86 of them have come from beyond the arc—83.5%—good for 38.4% from three. Whether it be as a standstill shooter, coming off of screens, or in transition, Grimes is able to find proper space and launch one as soon as he touches the rock.

Defensively, Grimes is still figuring out his place, but the tools are there. He’s still working on proper defensive communication, but he has good hands, he always moves his feet, and he doesn’t ball-watch as much as a normal rookie. So far, EPM has him ranking in the 73rd percentile defensively. According to Cleaning the Glass, Grimes is in the 86th percentile in steal percentage at his position (1.9%) Getting him more minutes will allow him to see several different kinds of players, which would allow him to get more acclimated to the defense, as well as continue to grow among New York’s defensive system.

Where Grimes can take a step forward

Rookies aren’t perfect, and Grimes is no different. For all the good he does as a shooter, he does little to nothing with the ball in terms of creation. He’s lower in the pecking order—Randle, Barrett, Quickley, Burks…the list goes on of players who have more creation juice in Tom Thibodeau’s offense—but getting him more comfortable with even the occasional action would assist in Grimes reaching his ceiling.

Oh my what a sweet pass by Grimes!! pic.twitter.com/GGAiAmlD7V

I also want to see Grimes’ feel as a passer in larger samples. With six assists against the Spurs on Monday, Grimes looked like someone who could move the ball and further extend plays. Ultimately, that’s the difference between a solid wing and one who could be paid a ton of money in the future, and considering the Knicks just paid Fournier nearly $80 million for his ability to score and create for himself, it’s a viable position of need moving forward. Letting Grimes get more active as a passer off the bench, again, could be worthwhile for the Knicks.

And lastly, Grimes becoming more of an aggressive scorer. Yes, he can shoot the ball, but putting the ball on the floor and attacking the rim would offer a potential solution to New York’s lack of rim pressure. So far this season, Grimes only has eight free throws, suggesting that he’s almost allergic to getting to the line and contact. After figuring out and helping Quickley get more aggressive at the rim and getting to the line, Grimes should be next up in looking for those chances.

In limited minutes, Quentin Grimes has impressed me with how NBA-ready his game is so far. With Evan Fournier struggling and Alec Burks handling some of the point guard work, Grimes has been closer to 25 minutes a night, where he has often contributed well. For a Knicks team that should maintain an eye on the future, Grimes offers a solid shooter and defender at one of the wing spots. Putting his skill set gives them, theoretically, another shooter for Randle to work with, a formidable defensive tandem with Barrett, and a perfect backcourt mate for Quickley.

However, it’s up to the Knicks and Thibodeau to further develop the smaller aspects of his game. He’s still young enough to develop some on-ball skills and his passing has flashed throughout the season. He doesn’t have to be an elite ball-handler, but one that can make a play and put the ball on the deck when needed is key. Think Atlanta’s Kevin Huerter, who is taller than Grimes, but offers some of the same skills. That will be key in whether Grimes tops out as a starter, or if he’s better off as a two-way bench piece.

Again, it’s very early in the process, but the Knicks unearth a Reggie Bullock–like or Courtney Lee–like player late in the first round, consider it a win for Knicks President Leon Rose and the front office. Now, it’s up for Thibodeau to continue to push and give him more minutes, as Grimes could offer a player and archetype the Knicks desperately need amongst their star players—for the present and the future. 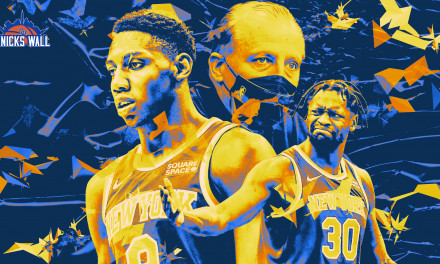