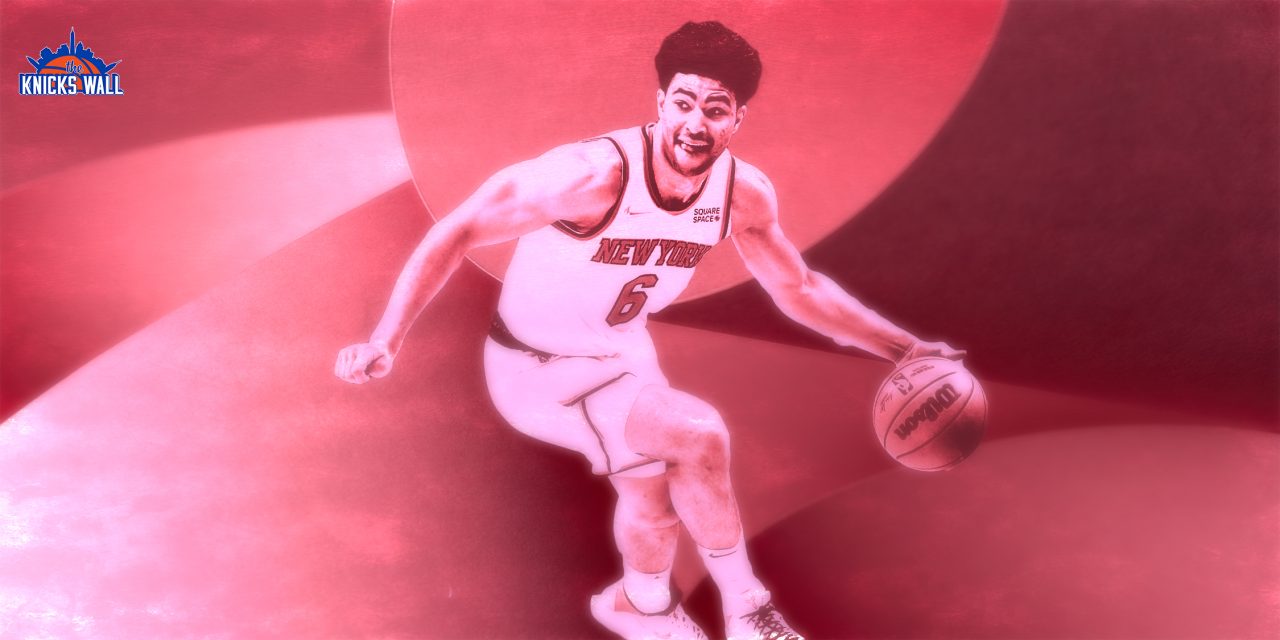 The Knicks have shown a great deal of investment in Quentin Grimes. How can the young guard maximize their faith in him?

When the New York Knicks failed to land Donovan Mitchell, several talking points spawned from the long process: what would the Knicks do now? Did they overvalue their own talent? Which players were actually in the trade? All of these conversations, and more, permeated the farthest corners of the fanbase. But there was another one that generated a crucial conversation as to the direction of the Knicks: was Quentin Grimes really considered an “untouchable” by the front office?

The conversation was all over the place. In the end, Grimes was viewed as a “walk away” piece for New York, after Utah requested RJ Barrett, Immanuel Quickley, multiple first-round picks, the sun, the moon, and the stars. However strong their unwillingness to move him, it became apparent that the New York organization has high hopes for their 2021 first-round pick. Even as New York signed Jalen Brunson, broke the Charlie Ward curse with an RJ Barrett extension, and continued to build their team around strong depth and defense, the thought of Quentin Grimes being untouchable remained.

But what if Grimes is everything the Knicks believe he is? What if the rookie season was merely a precursor to a promising career? Not only should the Knicks be intrigued at the thought of Grimes continuing to evolve his game, but by not trading him, the Knicks might’ve kept another avenue open for building their next great team.

The best thing about Quentin Grimes is how simple it all seemed to him as a rookie. Last season, the former Houston Cougar averaged 12.6 points, 4.3 rebounds, 2.0 assists, and 1.4 steals per 36 minutes, while sporting a 56.5 true shooting percentage. He never seemed sped up and he never looked out of place on either side of the ball. At the very least, Grimes showed how to be an excellent ancillary piece, working hard on defense, picking his spots, and not overstepping boundaries on offense.

It starts on the defensive end for Grimes. 1.9 stocks as a rookie are fine, but it’s the advanced stats that like him; specifically EPM, where Grimes’ 0.4 defensive EPM placed him in the 78th percentile. Standing 6-foot-5 with a positive wingspan, Grimes doesn’t have that size to completely change a defense; he does however have good size and a great basketball IQ, which earned him playing time from Tom Thibodeau early. Placing him in a hypothetical lineup alongside Barrett with Mitchell Robinson behind them gives New York a strong defensive base for Thibodeau.

The offense, specifically the passing, is the swing skill for Grimes. Already an adept off-ball shooter, Grimes continuing to grow as an off-the-dribble shot-maker would go a long way in helping not only his position on the team but also Thibodeau balance out the rotation as he maintains two centers and two non-shooting bigs in the rotation. Having another creator like Jalen Brunson should only help Grimes as he navigates through screens and shuffles into the corner for open looks.

The passing, however, flashed last season and could be huge for Grimes’ game. His burgeoning ability to put the ball on the ground and make plays in the halfcourt could open up another avenue in New York’s offense. The cause for concern is the litany of offensive creators in New York’s starting lineup, but Grimes slowly developing into a secondary creator could do wonders.

In a world where the Knicks are right about Grimes and he becomes an effective two-way player who can also generate offense efficiently would give the Knicks another talented starter in their group of young players. Outside of RJ Barrett, Grimes might be the best young player in New York’s stable of young talent. With Quickley and Obi Toppin moving closer to their next contracts, Grimes could become New York’s most cost-effective asset, thanks to being on his rookie contract for another three seasons.

But the development of Grimes and his incorporation into the starting lineup can also help New York move forward while waiting for the next superstar to become available. With no trade on the horizon, New York’s success and ability to increase its ceiling lies solely on the development of the players on the roster. Players like Grimes getting more minutes this season, RJ Barrett being trusted with a smidge more offense, and Immanuel Quickley serving as the glue for several different Knicks lineups as a do-it-all combo guard, all feel like the best chance of that happening.

For now, Quentin Grimes is in a great situation for him: earning the trust of Tom Thibodeau and possibly, sliding into the starting lineup for the 2022-23 season. Right now, Grimes fits the mold of a 3-and-D wing player, but an improvement defensively would add to his strengths, and becoming more flexible as an off-the-dribble creator could make him a valuable piece for the Knicks for years to come.

»Read: The Knicks must choose – a star or development