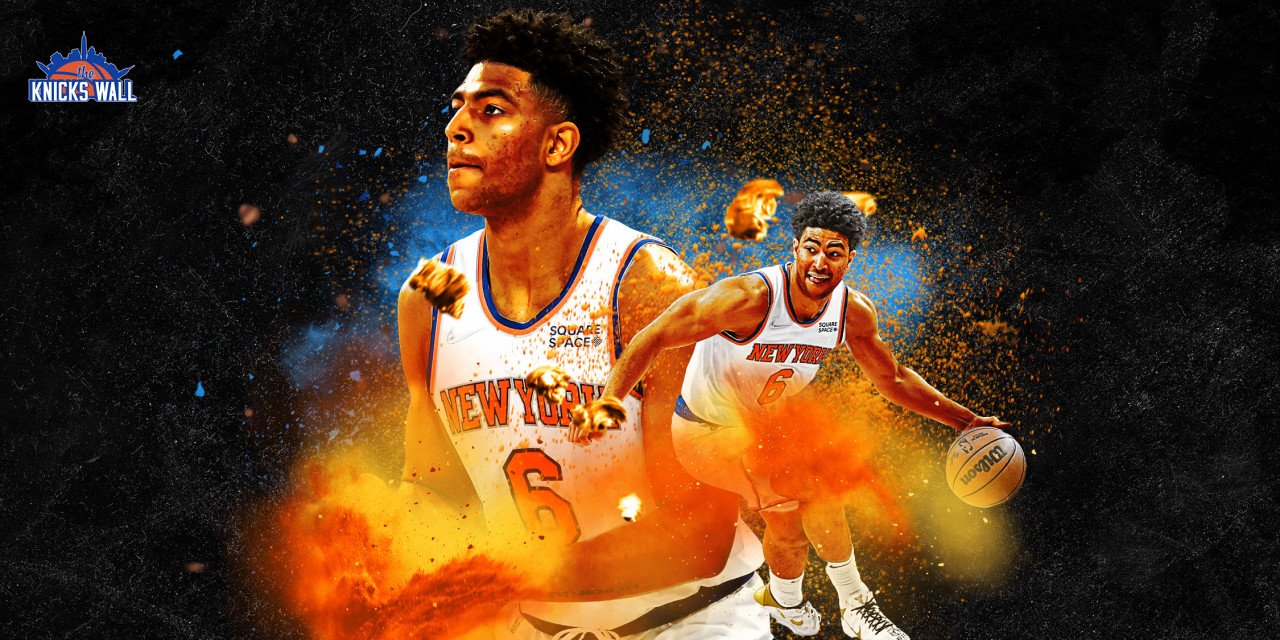 Quentin Grimes caught the attention of fans and coaching staff alike with his defense and shot-making as a rookie. How does he stack up to promising 3-and-D players before him, and what can we expect from him heading into year two?

In a season with many ups and downs, one bright spot for the New York Knicks over the course of the year was the breakout of rookie Quentin Grimes, whom the Knicks selected 25th overall out of the University of Houston in the 2022 draft. Grimes, who did not get much burn to start the season under coach Tom Thibodeau, eventually started to show flashes of the 3-and-D prowess New York desperately needed, given that their Defensive Rating fell off significantly from their 2020–21 campaign, and their only other consistent three-point shooting threats were Alec Burks, Evan Fournier, and Immanuel Quickley.

This player prototype is one that fans of the game usually refer to as “solid,” reliable,” or even a secret weapon for a contending team. When thinking of past 3-and-D players who had such an impact on a squad, you might think of Shane Battier’s impact on the championship Miami Heat team of the early 2010s or even former Knick Steve Novak, who was surprisingly good defensively. Any player that can shoot the three-ball consistently, so much so that he broke rookie records for New York, in this current league is typically a fan favorite. To have a young player like Grimes show he can do it while also performing at a high level of defensive intensity just means that the Knicks may have hit, once again, on a late first-rounder.

How did his year one output compare to that of current 3-and-D players?

We’ll use two other players with a similar makeup to Grimes to contextualize his first season with New York. Khris Middleton came into the league as a member of the Detroit Pistons and blossomed into the quintessential 3-and-D player when he was traded to the Milwaukee Bucks ahead of the 2013–14 season. Danny Green, who had a slow start his rookie year with the Cleveland Cavaliers, became a force with the San Antonio Spurs alongside Kawhi Leonard and under the tutelage of coach Gregg Popovich.

Middleton might be the better example, considering he is still known for his defense as a part of the championship-contending Milwaukee Bucks team. As a rookie with the Pistons, though, his output was very limited, just as Grimes’ was under the watchful eye of Thibs. They both averaged around 17 minutes per game, but Middleton played just over half of the games that Grimes did, only suiting up 26 times compared to Grimes’ 46 games. Grimes also started six times this past season, while Middleton never started as a rookie.

In terms of offensive output, Grimes shot far better from deep, hitting 38.1% of his three-point shots compared to Middleton’s 31.1% shooting. Grimes did put up more shots on average, shooting 4.1 long balls per game while Middleton only attempted 1.7 shots from deep per game as a rookie.

Defensively, Grimes had more steals, 31, than Middleton, 15, in his rookie season. Grimes also had more blocks than Middleton, recording 11 compared to Middleton’s four. They had similar Defensive Ratings, with Middleton allowing 110 points per 100 possessions and Grimes allowing 111 points.

If we are going off of minutes played for comparison’s sake, Grimes definitely had an edge with far more aggressive play on both ends of the floor.

Compared to Danny Green, the results are similar. But, like Middleton, Green played very few minutes as a rookie with the Cavaliers. Only averaging 5.8 minutes per game and only having played 20 games, Green averaged a measly 1.1 three-point attempts per game with a 27% shooting average from deep. Defensively, he only collected six steals and three blocks, but he did manage to have a DefRtg of 103 points allowed per game. Obviously, Grimes, with more reps ran laps around the output of Green in his rookie campaign.

Strengths and weaknesses of his game

These comparisons are not to say that Grimes does not have some drawbacks to his play. He looked to shoot from deep, often, as a rookie. But after injuring his knee in a game against the Miami Heat, his shooting efficiency dropped off significantly. He kept trying to get back into a rhythm offensively, but he was just never able to find the range to the same degree he had pre-injury.

Another potential weakness to his game is his vast room for growth as a facilitator. As a solid wing defender who can play alongside RJ Barrett next season and beyond, his role will likely be to defer not only to Barrett, but also to a more versatile shooter in Immanuel Quickley, or even a high-volume cutter in Obi Toppin if Quickley and Toppin continue to come off the bench alongside Grimes. If he’s able to develop himself as a good passer in addition to his pedigree as a shooter, he could be a force with the second unit. That is not to say that he doesn’t show promise in these areas, but the sample size was small.

One sample size that wasn’t small was as a defender. His defense was consistently troublesome for opposing players when he was on the floor. He was a virtuoso at getting by screens to kill advantages or force turnovers, often leading to fast breaks featuring a streaking Toppin or Mitchell Robinson. That defensive tenacity will continue leading to good looks and faster sets for New York, making his time on the floor invaluable as the Knicks continue to develop their youth and their bench.

Realistically, one would imagine that Grimes will be relegated to the bench for another year as a defensive stalwart and offensive spark akin to what Quickley or even a healthy Derrick Rose provided last season to an often-stagnant starting unit for the Knicks. If Quickley is promoted to a starter, barring any major offseason moves that would see New York acquiring a lead guard such as Donovan Mitchell or Jalen Brunson, Thibs would likely be fine with keeping Grimes on the bench to work off of a veteran guard like Rose.

Ultimately, Grimes has very little to prove next season, as he will likely be a go-to role player for Thibs. If his rookie season is any indication of how he will continue to develop as a sophomore, we’ll be seeing yet another young, up-and-coming face of the Knicks play his way into fans’ hearts just like Toppin and Quickley did in their second year.

»READ: Evan Fournier’s first season and future as a Knick