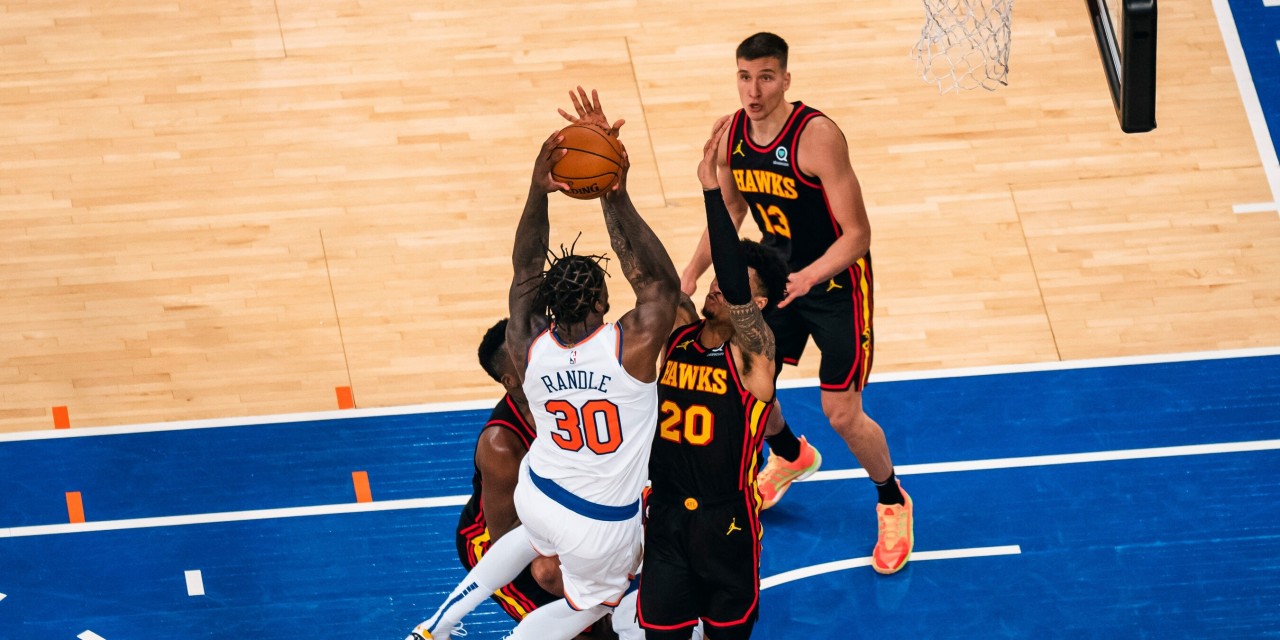 After letting Game 1 slip through their hands in the final seconds, Julius Randle and the Knicks are seeking redemption in Game 2 at home.

New York swept the Atlanta 3-0 in the regular-season series, but things looked a lot different on Sunday night with the game slowed down in a playoff atmosphere. The Hawks looked much more comfortable on both sides of the ball, more so on offense, and the reason behind this is Trae Young. Young was exceptional, finishing with 32 points, 10 assists, seven rebounds, and nailed the game-winner in the closing seconds.

Additionally, the Hawks got a boost from Bogdan Bogdanovic, who scored 18 points and hit four three-pointers, one of those coming with 55 seconds left in the game to tie it at 103. Of course, Clint Capela’s presence was also huge for the Hawks, as he had nine points, 13 rebounds, and two blocks. An underrated contributor for Atlanta was Lou Williams, who scored 13 points in 13 minutes, and went on a 7-0 run by himself from the third quarter to the fourth quarter to tie up the game at 73.

It’s clear from Game 1 that the Hawks are so difficult to guard because they surround a dominant point guard and center with several three-point shooting wings. They’re almost a perfectly constructed roster and coached by a guy who has a ton of experience in Nate McMillan.

For the Knicks, it was almost the complete opposite.

Julius Randle played arguably his worst game of the season, shooting 6-of-23 from the field, finishing with 15 points. Reggie Bullock went 0-for-5 from the outside for six points. Both were bailed out by Alec Burks, who had 27 points on 9-of-13 shooting off the bench. However, this was not the Knicks team that we’ve been watching the last few months, and there are many reasons for that.

Let’s take a look at specific things to watch for in this game, as well as what the Knicks have to do to even up the series at one apiece.

This was the first time all season that it felt like they couldn’t get stops when they needed to, and it was because of Young’s excellent pick-and-roll play. Here was a stat from Synergy Basketball that was mind-boggling:

Trae Young created 40 points out of the pick and roll alone in Game 1.

The Hawks only scored 107 points in the game, which means that 37.4% of their points came from pick-and-roll offense. The problem with defending the Hawks’ pick-and-roll is that if Noel closes in to help on Young, he’ll just lob it to a wide-open Capela for a dunk. If Capela isn’t open, Young has an array of options to put the ball in the basket and is good at drawing fouls if all else fails.

Rob Perez (@WorldWideWob) had a great explanation for all of this:

The one part that Perez didn’t mention in the video above is, if the Knicks send help, it’ll leave a three-point shooter open. Bogdanovic shot 43.6% from deep during the regular season and John Collins shoots 39.9%, so it’s likely that if you leave one of those two open, they will knock down the three.

However, the other player in the starting lineup is De’Andre Hunter, who only shoots 32.6% from three. If you’re going to send help defense to defend the pick-and-roll, Hunter is the player that should be left open. If Hunter is hitting treys, that’s something you live with. He shot 1-of-4 from beyond the arc in Game 1.

While Hunter is certainly a player you can target, he is still on a minutes restriction due to injuries this season. He only played 22 minutes in Game 1, with Danilo Gallinari (40.6% from three) and Kevin Huerter (36.3%) to take his place.

Gallinari was ice cold on Sunday, as he shot 1-of-7 from three in 23 minutes played. Huerter was 1-of-4 in 27 minutes played, That being said, it was an outlier shooting performance from both players, so it’s going to be tough to leave one of these guys open if you’re sending help to the pick-and-roll.

The bottom line is that it’s going to be very difficult to defend this pick-and-roll. While it likely won’t be stopped, it could be slowed, and that’s for Tom Thibodeau, a proven defensive maven, to figure out.

What has been a topic of conversation all season is once again a topic after Game 1: Elfrid Payton’s minutes. Payton played eight minutes in Sunday’s game and had zero points, one assist, and zero rebounds on 0-for-3 shooting from the field.

In previous articles, it has been explained how important it is that Rose comes off the bench. Rose has been vital to that bench unit, and the main reason why it’s so good and a complete mismatch compared to other bench units in the league.

One thing is certain. Frank Ntilikina would not guard a pick-and-roll like this.

This defensive possession probably made Tom Thibodeau scream on the inside. Elfrid Payton goes over the pick and can't pressure Trae Young. Julius Randle watches Young and just lets him go by while barely moving. Nerlens Noel is trying to get a body on Capela and doesn't contest. pic.twitter.com/7s3VweWXLM

If the Ntilikina minutes don’t work out, then Immanuel Quickley will likely see his minutes bumped up a bit, which would be great based on what we saw in Game 1. Quickley had 10 points in 21 minutes, including two extremely deep threes that lit up Madison Square Garden.

It would not be a stretch to say that Julius Randle played his worst game of the season in Game 1. Randle didn’t look like the player we’ve seen all season for a plethora of reasons, one being that he was facing a double team almost every time he touched the ball. When this happened, he was forcing up a lot of contested shots, and he wasn’t always making the right pass like he normally does.

There isn’t much to analyze here, as we will probably see a much-improved Randle for Game 2. Randle is a guy who averaged 24.2 points, 10.2 rebounds, and six assists this season In addition, he’s been the king of hitting contested shots, so even though the Hawks defense was great in Game 1, we will likely see some of these shots dropping in Game 2.

It also didn’t help the starting unit that Reggie Bullock wasn’t making shots. Bullock went 0-of-5 from three, the first time he didn’t hit a three since March 29th. The shot-making of Bullock was a major catalyst for New York’s dominance in April and early May.

Like Randle, don’t be surprised if Bullock bounces back in Game 2.

New York finished with 11 turnovers while Atlanta finished with six. You cannot waste possessions in the playoffs. What’s even more shocking is that Randle had three turnovers, while Derrick Rose had five turnovers. These are two players who are generally very smart with the ball.

Not only are the Knicks going to need to cut down on turnovers, but they also need to force more on defense in Game 2.

Per the team, Nerlens Noel is questionable for Game 2 with an ankle sprain.

It Was Only Game 1

It was extremely tough not to overreact to Game 1. That being said, let’s all remember that this is a best-of-seven series. A loss in Game 1, no matter how devastating it might have been isn’t the end of the season.

Furthermore, the Knicks lost on a game-winner with 0.9 seconds left. This is with Randle and Bullock playing awful games. If either of them gives you just a little bit more in that game, then it’s a win. The same goes for the Bogdanovic three-pointer to tie the game. If the ball deflects a different direction, the Knicks probably win the game.

R.J Barrett has yet to be mentioned in this article, but several have suggested taking advantage of Young getting switched onto him. The size difference is massive, so this is something that could definitely be utilized. Some have even suggested using Barrett to defend Young, which also could work. It’ll be interesting to see how Barrett is used differently in Game 2.

Most importantly, expect the Knicks to be more settled in for Game 2, as they have a game under their belt now. It should result in the Knicks returning to the form that we’ve seen over the past month and a half from them.