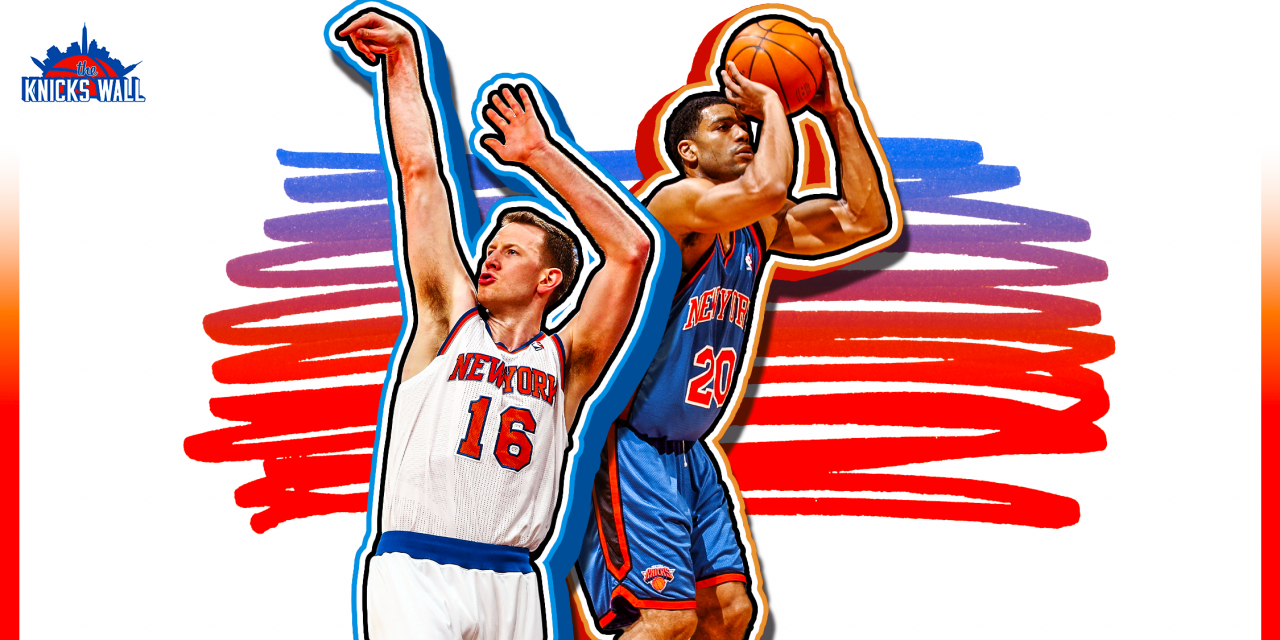 The Knicks have had their fair share of shooters come and go, but who are Pantheon-level shooters in franchise history?

As a baby of the 90s, I never really caught firsthand the excitement of a huge John Starks three-pointer or the prowess of Earl “The Pearl” Monroe during the Knicks’ championship run of 1973.

However, that doesn’t mean I’ve never seen a true shooter donning the orange and blue in my lifetime. I’ve been lucky enough to see Carmelo Anthony get any shot he wanted during his tenure with the team, or the “Victory Belt” celebration of Steve Novak when he’d hit long ball after long ball.

All this to say, New York has had their fair share of illustrious scorers, between three point specialists or just players that could score at will, much to the chagrin of their opponent night in and night out. The NBA has shifted to emphasizing scorers as stars in the league (after all, offense sells tickets), and it feels a good time as any to list off the Knicks’ five best shooters in their history.

Oh, Novak. Novacane. SuperNovak (*Editors note: okay, fine, I just made that one up, don’t blame Candace). He hit so many threes, and so many in big spots, that he had to make this list. And yes, I will listen to arguments about recency bias affecting my addition of him on this list. But how could I exclude him?

Novak came over to the Knicks from the Dallas Mavericks after only playing seven games with the Mavs after being waived by the team. In his two years with the team, Novak was definitely more of a three-point specialist than anything else. He averaged above 40% from deep in both of his seasons with the Knicks, with his most impressive season coming in 2011-12 when he led the league in three-point percentage, averaging a ridiculous 47.% on nearly 300 attempts. His playoff performances are a hit on him, though, which is why he is ranked fifth on this list.

Regardless, Novak is one of those Knicks players that will live in the minds of many fans my age or older who had the pleasure of watching a playoff contender that featured a legitimate threat from deep, at least during the regular season. He consistently hid in corners from opposing teams’ defenses because, well, the next person on this list was the Knicks’ best scorer on the floor with Novak. Nonetheless, the Discount Double-Check celebration will live in my mind rent free for years to come.

It physically pains me as a student of the Melo era to list Anthony at the four spot on this list. His ability to score at will was obvious in this era of play for the forward, but that’s a slightly different skill than pure shooting. Anthony was, and is, known for his ungodly ability to create scoring opportunities out of nothing, forcing defenders to respect him night in and night out.

After getting traded to the Knicks, he averaged 22.6 points per game in the 2011-12 season, his first full season with the team, shooting 43% from the field and immediately proving a spark to a New York squad seeking a competitive identity for the first time since the ’90s. His most impressive season was just one year later, when he averaged a ridiculous 28.7 points per game in his 2012-13 campaign and won his lone scoring title.

He never scored below 20 points during the Knicks’ playoff run that year after getting swept by the Boston Celtics during the 2010-11 playoffs, and losing in five games in round one to the Miami Heat in 2012. Unfortunately, after that significant postseason performance, the Knicks did not return to the playoffs while Anthony was on the team again.

Despite that, Melo remains one of the greatest shooters to ever suit up for the Knicks. He had too many memorable performances to count, but the one that will always stick out for me and so many other fans will be the Easter Day game against the Derrick Rose-led Chicago Bulls in 2012. His season-high 43 points and go-ahead three-pointer eked the team to victory over the Bulls in what felt like his best game as a Knick ever. Personally, he is my favorite Knick of all time, and his prowess as a scorer will always live on in spite of what some may feel about the trade it took to get him to the Garden.

There’s a reason why Knicks fans like to compare the shooting stroke of now-sophomore guard Quentin Grimes to that of Allan Houston’s. Both are so clean and poised, and you almost always feel like their long ball is going in just based on their shooting form alone.

Houston had that touch back when he was a member of the uber-successful, albeit ringless, ’90s Knicks. He was an absolute work-horse, playing in 82 games with the team in his second year and never playing less than 50 games until his last year with the team, when he only played 20 games. Houston boasts a pretty impressive playoff resume, having played 63 total games between his time with New York and also with the Detroit Pistons. He averaged 19.3 points per game on 44.8% shooting from the field and 42% from deep over that span of postseason play.

As a member of one of the more memorable Knicks teams, Houston definitely cemented himself as a weapon on offense. To be a sniper in the postseason is rare, considering that so many regular-season greats end up not performing at those same levels when the playoffs come around. He had two games where he scored 34 points in the playoffs, once against the Atlanta Hawks in the second round of the 1998-99 playoffs and again in the same postseason against the San Antonio Spurs in the NBA Finals, which they went on to lose in five games.

Between his reliable shooting come playoffs time and his beautiful shot, Houston is one of the most mentioned Knicks players around the conversation of best shooters to ever play for New York.

As I mentioned before, I missed the era of 70s Knicks basketball by… about twenty years, give or take. Even so, it’s important to not disregard the greats that existed long before the age of social media, aggregation, or even the glorification of elite shooting as a desirable asset to a team. Dick Barnett certainly fits that mold, and it’d be a disservice to not include him, or my choice for number one on this list, in these rankings.

Regardless, he was one of the more understated scorers for New York as Barnett was surrounded by other greats like Walt “Clyde” Frazier and Earl “The Pearl” Monroe. That could’ve been because of his interesting jump shot, where he jerked his legs a bit when in the air and releasing for his shot. But, it was effective. Simply put, he was a sharp-shooter before the three-point line was even put onto NBA courts.

Barnett, overall, was a great shooter from deep before those stats were even measured. He was a contributor to the Knicks in the regular season and in the playoffs. And, his number is rightfully retired by the Knicks because of his accomplishments, measured by statistics or not, while playing under the bright lights of the Garden during their first years of success as a franchise.

In this piece, I’ve used the word illustrious. I read it in Walt “Clyde” Frazier’s voice, given his propensity for tongue-twisting analogies while working as the color commentator on MSG Networks, covering the team he called his back in the 70s.

There’s a reason why Frazier was named to the 75th Anniversary team by the NBA. He was simply immaculate as a shooter, and the Knicks’ championships in 1970 and 1973 were probably unlikely to happen if he were not on the team during those runs. Frazier’s numbers speak for themselves – in the playoffs, he averaged 20.7 points per game on 51.1% shooting from the field. Overall. In the playoffs.

He was the fifth overall pick for the Knicks in the 1967 draft, and was selected to the All-Rookie team for the NBA. In addition to that accolade, he was a seven time All-Star and even won the Most Valuable Player Award at the 1975 All-Star game, scoring 30 points in that contest. He also had, without a doubt, the most important single-game performance in Knicks’ history.

Frazier’s numbers were just as bonkers in the regular season, where he averaged 18.9 points over the course of his career with New York and with the Cleveland Cavaliers, hitting 49% of his shots from the field. His finesse both on jumpers and with getting to the rim was undeniable. Percolating and devastating would certainly be a Clyde-ism that could be given to his own play during the Knicks’ success of the ’70s.

Frazier is a namesake when thinking of the Knicks for so many reasons aside from his shooting skills. As I mentioned, he’s still working with the team as a commentator, and he’s just as known for his work in broadcasting as he was known for his play while with New York. But his shooting, much like that from Anthony, was almost automatic at times. He was dominant, and oftentimes the best player on the court at any given moment. There’s a clear reason why his number was retired by the organization.

There’s still time to see what is made of the 2020s for the Knicks. We may get lucky and see someone who comes close to the level of shooting and scoring prowess that those on this list had in their time with the team. If we don’t, though, we always have their highlight moments and postseason feats to look back on with hope with an eye to the future.

»Read: What we can learn from Summer League