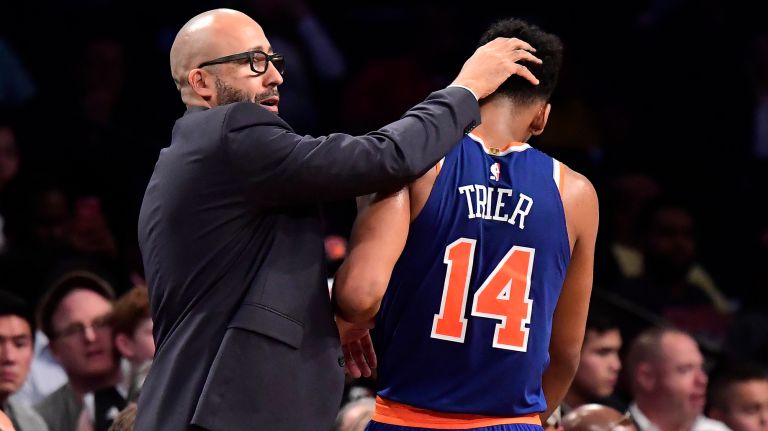 The Knicks’ recognition of undrafted free agent Allonzo Trier’s potential proved fruitful as the two parties have agreed to a new contract.

Would everyone please raise their glasses and join me in a toast?

To Scott Perry, Steve Mills, David Fizdale, and the rest of the new brain trust—thank you. Thank you for bringing momentary competency back to the New York Knicks. This season continues to encourage a fan base that has been tortured by incompetency for far too long. I’d also like to welcome Iso Zo full-time, may you continue to break ankles and get buckets. Lastly, I would like to bid farewell to a guy who exemplifies grit, tenacity and finesse, Ron Baker. Good luck in your future endeavors, and thanks for all the effort and laughs along the way.

If you haven’t heard by now, the Knicks signed Allonzo Trier to a two-year deal worth $7 million, with a team option for the second year. In order to make room for Trier, the Knicks will release Ron Baker, who has played sparingly this season. Count this as yet another smart move by the front office.

They could have tried to eat less money by cutting Luke Kornet, but the wise decision was always Baker. Unlike Kornet, whose stretch 5 presence carries value on this roster, Baker’s combo-guard skill set is redundant with Trier, Trey Burke, Frank Ntilikina, and Emmanuel Mudiay ahead of him on the depth chart.

Thank you for your service Ron. By all accounts you were great for the locker room. Knicks president Steve Mills made sure to say that much today when the news broke.

“Ron is a true professional and we thank him for all of his contributions during his time with the Knicks,” Mills said. “His dedication and passion for the game are unquestioned and have been truly appreciated by our fans and organization.”

As for Iso Zo, welcome to the foundation. There was never any doubt amongst fans as to whether Trier should be incorporated into this young core. We now know the front office shared the sentiment. Trier’s new deal is the richest contract a two-way player has received, perhaps opening the door to a new way for players not picked in the first round to get properly compensated.

Of the three Knick rookies, Zo has been the most consistent by a mile, thanks in large part to his unwavering confidence. Unlike Knox, Robinson or even Frank, Trier knows exactly who he is. It is a big reason Fizdale has had no quarrels tossing him the ball and letting him operate, leading to outbursts like this.

The peace of mind in job security should only increase Zo’s presence in the locker room; he’s only 22 years old, but on this team that can pass as an old head. His work ethic alone should propel to being one of the leading voices in the locker room. His relentless playing style has already made him a leader on the floor.

Trier also makes New York more attractive. His play has caught the attention of his peers. Come July 1, a young core of Kristaps, Frankie, Knox, Mitch Robinson, and now Trier is a much more viable free agent pitch than simply “being in New York” which has had the success rate of a North Korean nuke. But there is one issue.

By signing Zo the Knicks now have a little less than $30 million in cap space at the moment, according to Ian Begley. That is not enough to woo a Kevin Durant or Kyrie Irving. It’s damn sure not enough to get both. Maybe the Knicks wait until 2020. Maybe they hit the (draft) lotto and don’t need the big signing.

That’s an issue for another day. Today we celebrate. The Knicks continue to move in the right direction, and today’s moves were yet another cleared checkpoint for this new regime.