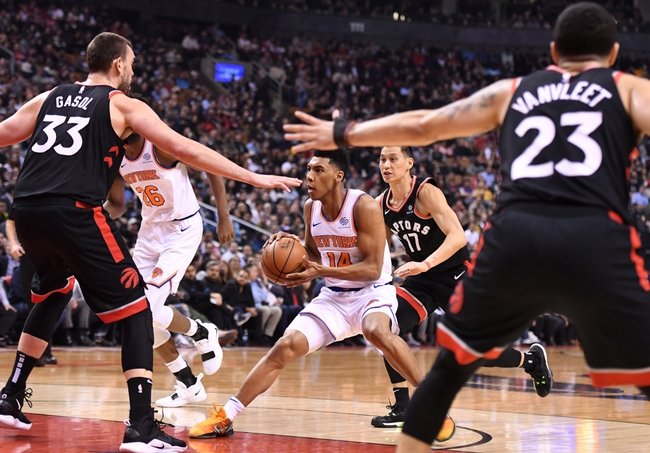 The Knicks didn’t show up against the Kawhi-less Raptors in Toronto, losing by an embarrassing 36-point margin to Kyle Lowry, Pascal Siakam, and others.

There is no reading between the lines after this kind of loss.

Kawhi Leonard (load management) and Serge Ibaka (suspension) both sat out tonight’s game, and it didn’t impact Toronto at all. With 38 first-quarter points, Pascal Siakam and Fred VanFleet managed to tear apart the little interior defense New York has.

In just the first half, New York gave up 73 points and allowed the Raptors to shoot a scorching 60 percent from the field. With two minutes left in the second quarter, the Raptors blew open their lead to 17, capping off a 35-point quarter.

Mitchell Robinson was noticeably aggressive against the Raptors, picking up three quick fouls in his first five minutes of play. Following a reckless, and sixth, foul against Kyle Lowry, Robinson was ejected in just 14 minutes. He totaled zero points and five rebounds while adding three blocks—his 28th straight game with a block.

Coach David Fizdale pulled all five starters from the game following a horrendous start to the third quarter. For the period, New York shot 33.7 percent from the field and hit just eight of 34 shots from deep. The Knicks did not move the ball well, which tended to stick to the hands of Allonzo Trier, Kevin Knox, and Mario Hezonja.

Toronto opens the second half with an 8-0 run pic.twitter.com/u8PtVnta8H

Toronto, meanwhile, hit 17 of its 40 attempts from deep, good enough for a near 44 percent clip. The Raptors’ ball movement created opportunities along the perimeter, and the starting lineup hit a combined 13 attempts.

Per Knicks PR, Mitchell Robinson has tied Patrick Ewing’s franchise record for most consecutive games with a block. Robinson is now averaging three blocks per game over his last 28 games, and averaging 2.4 blocks per game on the season—good enough for third in the NBA.

Kadeem Allen had his worst game as a Knick, going 0-for-8 from the field and 0-for-3 from deep, while only grabbing one rebound and assisting on just one scoring play. Fizdale gave him 26 minutes of playing time, however, as a result of the game being lost early in the third quarter. In the two games prior to tonight’s match, Allen was shooting 52 percent from the field in his games with New York.

Damyean Dotson started off the game strongly, going 2-of-3 from the field and continuing his hot shooting streak. As the deficit increased, Fizdale pulled Dot after playing just 18 minutes. Dotson finished his game going 3-for-7 from deep. In the last ten games, the second-year guard has averaged 32.5 minutes, 15.3 points, and 4.9 rebounds per game.

The Knicks are off Tuesday and play tri-state area native Donovan Mitchell and the Utah Jazz on Wednesday.