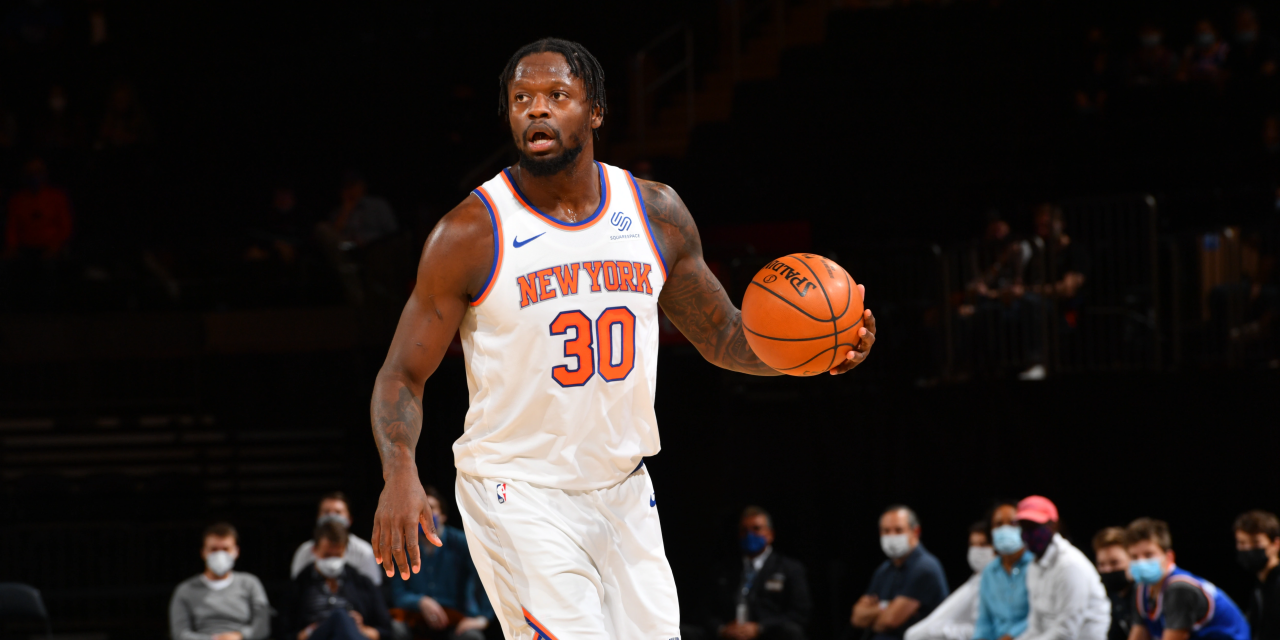 After taking down the Hornets in overtime, the Knicks prepare for the Celtics on Sunday, which could determine their playoff destiny.

The New York Knicks lost control of their own playoff seeding destiny after losing to the Los Angeles Lakers on Tuesday, but the team did their job Saturday afternoon. New York squandered an 18-point third-quarter lead but managed to scrape out a win 118-109 in overtime against the Charlotte Hornets.

Now, the Knicks can claim the fourth seed with a win against the Boston Celtics on Sunday and a Miami Heat loss to either the Milwaukee Bucks or the Detroit Pistons, or if both the Heat and the Atlanta Hawks lose out.

The road back to the 4th seed pic.twitter.com/6E9F52SGz8

Julius Randle continued his All-NBA campaign with a Herculean effort across 46 minutes. 33 points, 10 rebounds, and 13 assists, his sixth triple-double—the third most a Knick has had in a season, trailing Micheal Ray Richardson, who had seven twice, and Walt Frazier had eight during the 1968–69 season. Clyde’s reaction when told that there aren’t enough games left for Julius to break his record: “Awww shucks.”

Both Derrick Rose and R.J. Barrett found themselves on the bench towards the end of the game. Rose had been coming off a sprained ankle that kept him out versus San Antonio, but according to Thibodeau, both are fine. “It was just the way the game was unfolding. … We were just trying to find a group that could go,” he said. “And that group ended up going well, so we stayed with them longer.”

In that same vein, Elfrid Payton continues to lose minutes. For the eighth game in a row, the Knicks’ starting point guard notched fewer than 20 minutes and, pointedly, he didn’t return to the game after Thibs subbed Rose in for him about halfway through the third.

The Knicks are nearly at full health. Only Mitchell Robinson remains injured, and while Thibs told reporters he “Still has quite a ways to go,” he did say he’s returned to on-court activities and didn’t explicitly rule him out for a potential playoff run.

Thibs says that @23savage____’s rehab is going well. He’s progressed to on-court activities, “but still has quite a ways to go.” pic.twitter.com/KpPHR2QEXq

The defense was the deciding factor down the stretch; during the final six minutes of the fourth quarter, the Knicks scored just five points (both jumpers from Randle), but they held the Hornets to three points (a layup and a free throw both from Terry Rozier).

Nerlens Noel served as the defensive anchor as always, tallying five (almost six thanks to a close goaltending call) blocks. After the game, he told the reporter, “This team is built in the best way possible. Guys do their jobs, and we know what we have to do game-by-game. We’re not worried about what the opponent’s intentions are; we’re just focused on game-by-game trying to secure the fourth seed.”

The Knicks end the 2020–21 regular season by hosting the Celtics at MSG tomorrow afternoon on ESPN at 1 p.m. ET, with home-court advantage potentially at stake.