Reflecting on the Kristaps Porzingis Trade One Year Later 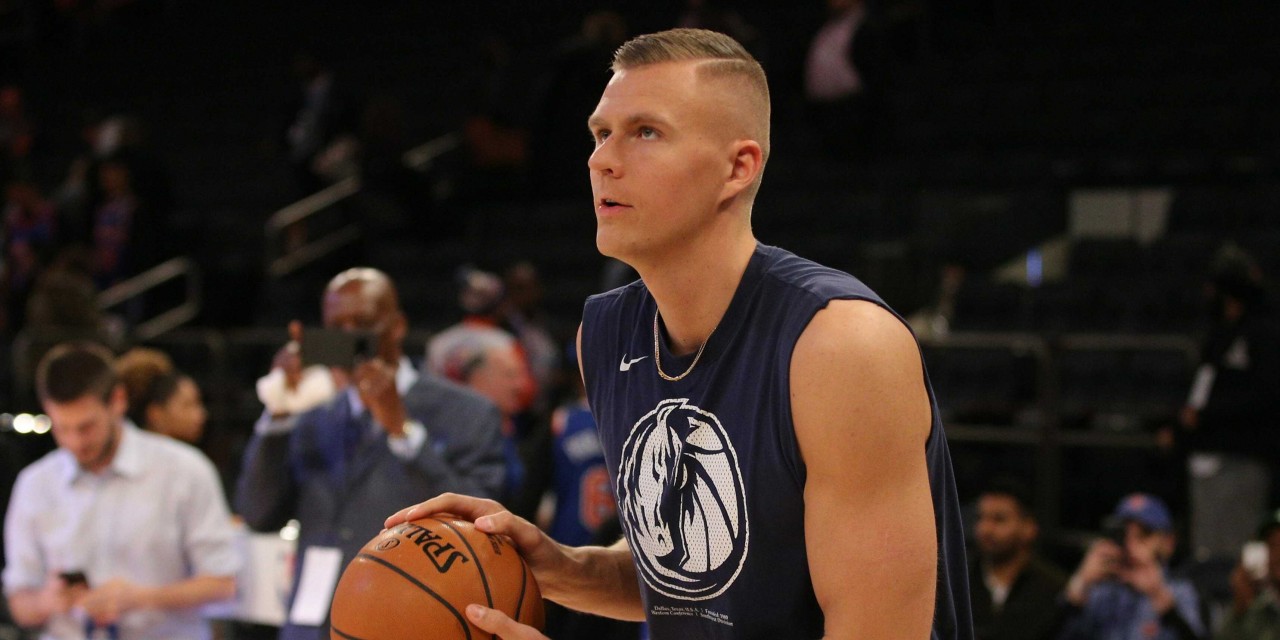 The Knicks traded All-Star power forward Kristaps Porzingis one year ago today. They’re not in a better place as a franchise because of it.

It was all good just a year ago.

The Knicks were bad, sure, but this time there was a reason to be excited about the future. All the losing could turn into Zion Williamson, Ja Morant, or R.J. Barrett. They had a legitimate inside track on Kevin Durant, according to many well-connected, trustworthy insiders. And if all else failed, they had Kristaps Porzingis waiting in the wings, the steal of the 2018 draft, Mitchell Robinson, and a group of youngsters with promise as role player specialists.

January 31st, 2019, started out with a meeting between Porzingis, his brother/agent Janis, Scott Perry and Steve Mills, to discuss Porzingis’ concerns about the organization and its direction.

That meeting lasted about as long as Carmelo Anthony’s Hawks career, and an hour or so later an agreement with the Dallas Mavericks was reached suspiciously swiftly. The trade put the Knicks back into 2010 mode, where they pushed all their chips into the free agency pot.

A year later the trade looks like an epic disaster and could get worse depending on what happens over the next couple of months and years in Dallas and New York.

Given it’s the biggest Knicks transaction since the Anthony deal in 2011, and the seminal moment of the Perry-Mills regime, now is as good a time as any to rehash the deal in detail.

If you are squeamish, please look away.

DeAndre Jordan ended up being the best piece the Knicks got back in the deal, believe it or not. Jordan served as a strong mentor for Mitchell Robinson who played noticeably better (and smarter) once Enes Kanter was sent walking. Jordan was the vet taking Robinson under his wing.

In the end, while Jordan did leave for Brooklyn to join Durant and Kyrie Irving, he was never meant to stay past last season anyway, so it the grand scheme this was a rare win for the Knicks in this deal.

Remember the ‘Melo-Hawks joke I made about two minutes ago? It really should’ve been a Wes Matthews–Knicks joke, because Matthews played two more games for the Knicks than you and me. But like Jordan, Matthews was salary filler, and keeping him was more of a disservice to him. Matthews would sign with the Pacers and play meaningful basketball in Indiana and now Milwaukee.

Where to begin. If I wrote this last June, I would be talking myself into a Smith Jr. leap year for 2020. In his first 21 games as a Knick, Smith averaged 14.7 points and 5.4 assists per game on 41.3% shooting. If he could fix his jumper over the summer, the sky would be the limit for Smith in New York.

That did not happen. Instead, Smith has had a Markelle Fultz–type year, and I’m not referring to Orlando Magic Markelle. There has to be more to Smith’s story, because his numbers are abnormally appalling (5.2 points, 2.6 assists, and 2.1 rebounds per game with 34-30-50 shooting splits). Smith started the year with a bad back, then suffered a death in the family, and never once looked like himself this year.

And the worst part? It can get worse. Some are still holding out hope that the pair of first-round picks the Mavericks gave up are the centerpiece of the Porzingis return, but in reality it was Smith. If Porzingis and Luka Doncic thrive as a duo, it’s not out of the question for fans to direct their frustration on poor DSJ. Hopefully he is traded at the deadline for his own sanity.

Barring a massive injury to Luka next season, both picks will be in the teens at best, high 20’s at worst. Doncic is simply too good for the Mavs to be bad. Right now it’s him and Porzingis essentially, and the Mavs are fifth in the West at 29-18.

What could change these picks from being duds to borderline centerpieces is the Knicks flipping them now while they still hold some value. Perhaps a deal with the Raptors to lure Masai Ujiri, or a godfather offer for a Bradley Beal or Karl-Anthony Towns?

It’s the only piece of the Knicks’ return that is salvageable at this point, so it’s a move they should be heavily considering.

A massive win for the Mavs, who pair Doncic with his 24-year-old European All-Star friend. It’s a win no matter how you slice it, including the $158 million extension.

Even a rusty Porzingis has been enough (16.8 points, 8.9 rebounds, 2.0 blocks per game with 40-34-74 shooting splits). Once he is fully recovered, the Mavs have a duo to compete with in the future.

What happened in the brief meeting prior to the trade will eventually come out. This is what Perry had to say in the immediate aftermath, per a team statement via SNY.

“As is standard for this time of year, we were exploring various options on potential trades. Considering the uncertainty regarding Kristaps’ free agent status and his request today to be traded, we made a trade that we are confident improves the franchise. We thank Kristaps, Tim, Courtney and Trey for their contributions and wish them all the best.”

It was already confirmed Porzingis did ask for a trade. He and Janis were concerned about the organization’s direction, most likely due to a lack of confidence in Mills. But the Knicks still had the leverage in this standoff, and for them to not recognize that is more troubling than the actual trade.

As Porzingis proved months later, $158 million is a lot easier to turn down in theory. I have an extremely hard time believing a Porzingis deal could not be had on draft night or even into the summer, with a more definitive indication about Durant and company.

Tim Hardaway Jr.’s season has been a Falcon Punch to the groin for Knicks fans, and something Perry and Mills should not be blamed for. Hardaway was clearly never meant to thrive as a Knick, but life elsewhere has been decent.

This season he has been a reliable shooter for the Mavs, shooting a career-high 39.7% beyond the arc on a healthy 6.7 attempts per game for Rick Carlisle. At the time of the trade Hardaway’s contract was the premium the Mavs would have to pay in order to land Porzingis. Now he has turned into an asset they can flip as an expiring next season or hold onto given his strong shooting.

Courtney Lee’s time in Dallas has been nonexistent. Like Hardaway, Lee’s contract was part of the premium the Mavs had to pay, but unlike Hardaway, Lee has not found a way to contribute. He has appeared in 10 games this season (three starts) and 32 games overall. His contract expires at the end of the season.

Trey Burke was a simple catch-and-release, much like Matthews was for the Knicks. Burke played 25 games after the trade, started just one of them, and left for Philadelphia in free agency. He went from a feel good redemption story in New York to a rotation blocker for Frank Ntilikina. Burke’s departure did nothing to change Ntilikina’s minutes quagmire, but his part in this deal was non-consequential for both teams.

The Mavericks remain the landslide winners. Porzingis and Doncic have serious potential. Hardaway being effective was an added f–k you, but the Knicks whiffing on Durant, Irving, and any other star of note in free agency is what sealed this trade as a colossal loss.

Deciding to spend the $74 million they freed in this deal on a smorgasbord of veterans, who have had the chemistry of a Real World house, only hardened the blow. The Knicks are just as bad as they were a year ago, and this time there is no Zion to pray for, or Durant to court. And the kids still aren’t playing!

The most frustrating part is this trade proved nothing has changed about the front office’s vision for building a good team.

When they traded Porzingis they unofficially ended the proper rebuild they spent the first half of the season pitching while fans patiently waited for Porzingis to return. A proper rebuild keeps Porzingis, builds through the draft, and then swings for the fences on a star.

Mills and Perry opted for the temptation of glory. They went all in when they could have simply checked and called Porzingis’ bluff. Now they have no franchise player, no real direction, and no one in the front office capable of changing their fortunes.

The one thing the Porzingis trade did was highlight exactly why Mills has no business running a basketball team. The only “win” in the deal initially was unloading Hardaway’s contract which was considered untradeable; a contract for which Mills is solely responsible.

To be fair and play devil’s advocate: for Mills and Perry, luck swung the other way. Once Durant went down they lost all possible recruiting leverage with Irving, Kawhi Leonard, or whoever else he could have convinced to come with him to New York.

But that’s the issue. For the fate of a franchise to be decided by the complete randomness of an Achilles tendon rupturing displays an alarming level of incompetence. It proves that the front office doesn’t have a long-term plan, as does their continued reliance on signing veterans in spite of playing the kids.

The Knicks are not rebuilding, just rebranding. They are what they were a year ago, and like sharks, if you’re a team that’s not making moves, you are dead in the water.