Reggie Bullock Can No Longer Start for the Knicks 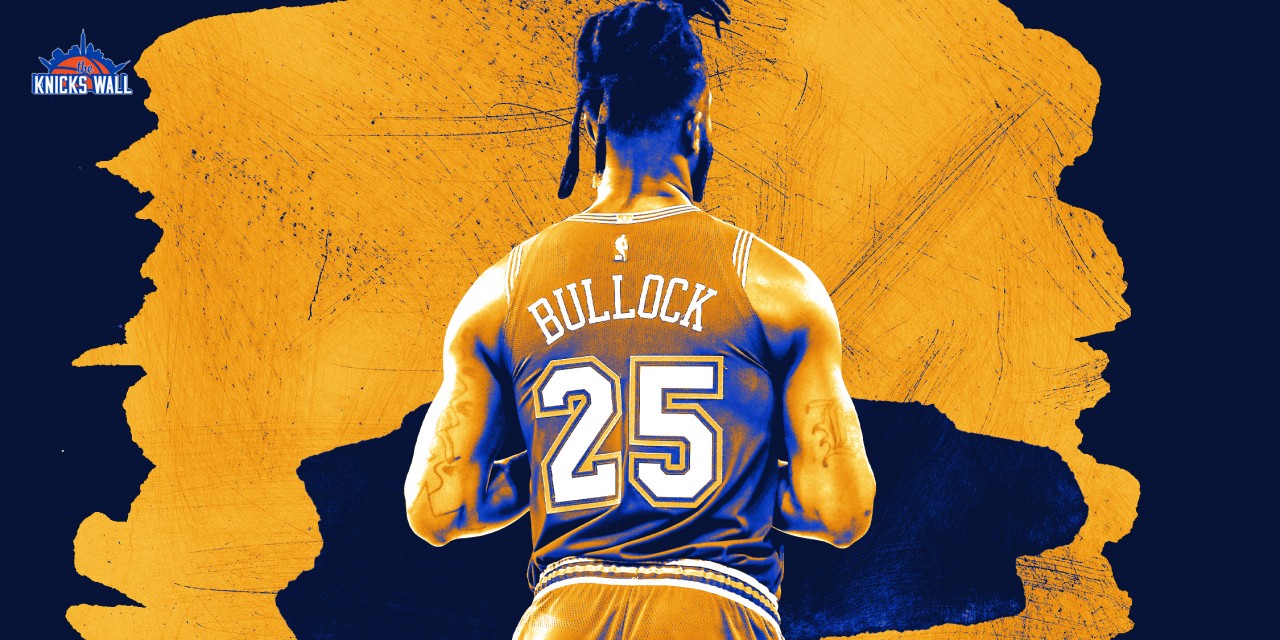 Reggie Bullock has been a fixture at the wing in Tom Thibodeau’s Knicks starting lineup, but he’s not exactly providing great value.

The New York Knicks recently orchestrated a roster shake-up, agreeing to send Dennis Smith Jr. to the Detroit Pistons in exchange for Derrick Rose. The acquisition of Rose, who will presumably leapfrog Elfrid Payton in the starting five, has drawn mixed reviews from Knicks fandom. With two veteran floor generals now on the depth chart, it appears as if rookie Immanuel Quickley—who’s impressed as a scorer and facilitator—may be the odd man out.

While this storyline is certainly one worth keeping tabs on, there’s another starting lineup conundrum in New York that has flown under the radar. Wing Reggie Bullock has started every one of the 21 games he’s played with the Knicks this season. Yet, when examining the statistics and Bullock’s one-dimensional skill set, it’s evident that his fit alongside the opening unit is questionable at best. Put merely, Bullock is not performing at a starter-caliber level, and there are other options on the roster better equipped to flourish with his responsibility.

Bullock falls under the category of a prototypical 3-and-D role player. Meaning, on offense, Bullock brings the lion’s share of his value with his ability to space the floor from beyond the arc. The Knicks are shorthanded in terms of reliable three-point threats, and Bullock has been consistently accurate from deep throughout his career. But this season? Bullock has converted his treys at a league-average rate at best, as evidenced by the fact he ranks in the 46th percentile among wings in three-point percentage, per Cleaning the Glass. Sure, 37.1% on threes certainly isn’t an awful mark, but the argument that Bullock belongs in the starting five because of his shooting prowess is fundamentally flawed.

Kevin Knox—who’s eight years Bullock’s junior—has been fixed to the bench as of late, and yet he’s shooting the deep ball better than Bullock (39.1%) this season. Alec Burks—who has admittedly cooled off following a torrid start to 2020–21—is still leading the Knicks in three-point percentage at 45.2% on 5.2 attempts nightly. The days of Bullock burying 45% of his threes as he did with Detroit in 2017–18 appear to be behind him. There are superior marksmen at New York’s disposal in the here and now, one in Knox who could reap long-term rewards if he gets added run time, and another in Burks, a significantly more well-rounded player.

5th three of the game for Reggie! pic.twitter.com/qTl3bl4sFr

In totality, Bullock has been adequate albeit underwhelming as a floor-spacer for the Knicks. If he made up for his streaky shooting by contributing to New York’s offense in other facets, perhaps it would justify Bullock’s place as a starter. But this couldn’t be further from the truth. Bullock is often a sitting duck out there for the Knicks. There have been far too many instances in which Bullock played an exorbitant amount of minutes yet accumulated zeroes across the board.

For one, Bullock is a non-difference maker in the playmaking department. Uncomfortable picking up his dribble for more than a second or two, the 29-year-old is ill-fit to create scoring chances for himself or his teammates; According to Cleaning the Glass, he falls in the lowly 14th percentile in assist percentage (6.9%). Stagnation has hit the Knicks’ offensive attack like a ton of bricks at times this season, and Bullock’s set of skills (or lack thereof) provide no aid towards resolving this pertinent issue haunting the team. His presence on the floor further limits the number of shot creators on a Knicks team already bereft of this all-important attribute.

Additionally, while most of Bullock’s field-goal attempts have come from deep, he has ventured inside the arc on occasion with dreadfully inefficient results to show for it. Bullock has struggled in the paint more so than any other proximity. A mere 54% of Bullock’s point-blank looks have fallen—a team-low among any Knick who’s played 14 games. When analyzing Bullock’s infrequent at-the-rim attempts, it becomes apparent that he’s hurrying his layups. And with an unreliable handle, he lacks the burst to weave himself into driving lanes and is prone to get swallowed up by the defense inside.

We know what Bullock brings to the table scoring-wise at this stage of his career. He’s a respectable spot-up shooter and not much more. Bullock is hindering the scoring potential of New York’s starting five. Until head coach Tom Thibodeau tweaks the lineup, overwhelming pressure will continue to fall on Elfrid Payton (or another point guard) and R.J. Barrett to make things happen with the ball in hand. Burks, a crafty ball-handler and capable passer, should be the clear-cut starter in place of Bullock.

Reputations carry a lot of weight in the NBA, perhaps even too much. There are countless instances of players receiving contracts for past accomplishments when, in reality, they are not who they once were. A prime example of this is Reggie Bullock and his noticeable drop-off in defensive effectiveness compared to years prior. Back during Bullock’s Pistons days, he was universally considered an above-average to elite on-ball defender.

When Detroit made the playoffs in 2015–16, they faced off against LeBron James and the Cleveland Cavaliers in the opening round. The Pistons ended up getting swept 4-0, but Bullock guarded James throughout the series and played him as well as possible. James averaged an abnormally low 22.8 points per game for the series and shot 48.7% from the field. What stood out even more than James’ numbers is how Bullock defended him without fouling, as James took just 15 free throws across four games. Bullock’s foul percentage at the time was 2.9%, which placed him in the 56th percentile among wings. What made Bullock an impactful on-ball irritant in the past was his combination of aggression and discipline; the latter trait has alluded him this season.

Bullock’s foul percentage in 2020–21 is a career-worst 3.8% (23rd percentile, per Cleaning the Glass). Only neophyte Immanuel Quickley is placed in a lower percentile, to put this in perspective. Not to mention Bullock committing the most fouls per game of his career at 2.4 in 27.4 minutes.

Hacking at a well-above league average rate while providing minimal assistance in the steals department (40th percentile in steal percentage), Bullock is no longer a game-changer on defense. He’s no better than average on that end. It’s easy to get caught up in Bullock’s reputation and assume he’s a prolific defender because the Knicks have excelled as a unit. But, in reality, he hasn’t had much to do with the team’s success in preventing scores. Bullock’s potential replacements, Knox and Burks, are every bit as useful on defense; Knox can disrupt opposing wings with his length, while Burks has fared better in coming up with steals (61st percentile).

In conclusion, Bullock’s reputation appears to be the reason why he’s held the starting nod over Burks and Knox. While a magnificent perimeter defender and three-point specialist in years past, Bullock has noticeably regressed in both areas. He’s not hooping at the level of most starters in this league, and his limited bag of tricks is hurting a Knicks offense that must progress and improve to break their playoff drought.