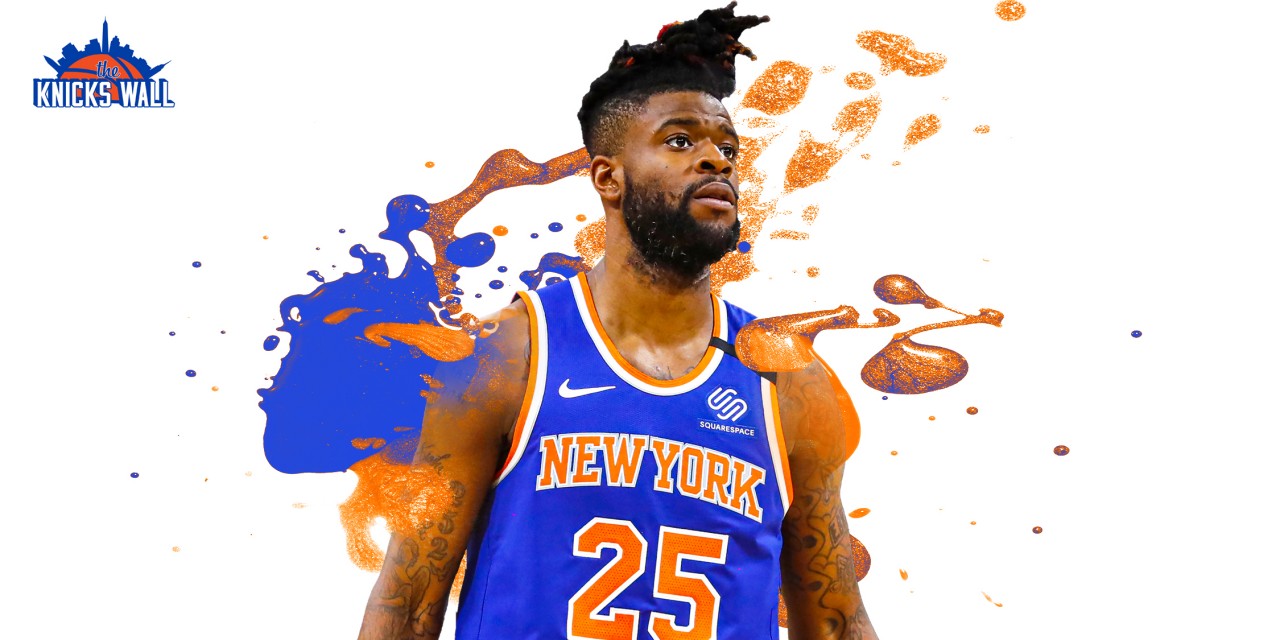 Journeyman wing Reggie Bullock has come up big for the Knicks this season. How could he potentially make or break a playoff series?

Reggie Bullock has been very impressive in his second season with the orange and blue. After a rough first go-around in the Big Apple, the 30-year-old wing has been an integral part of the New York Knicks’ renaissance this season to the tune of 10.9 points per game and 41.0% shooting from behind the arc, per NBA Stats. We are all well aware that the Knicks had been lagging behind in the three-point shooting department for years; this year is different and no. 25 has been a big reason for that.

On top of his sharpshooting abilities, Bullock has been getting after it on the defensive end of the floor this season and has clearly embraced first-year head coach Thibodeau’s hard-nosed defensive mindset. Bullock’s veteran presence has also been key to younger guards like Immanuel Quickley and R.J. Barrett.

The Kinston, North Carolina, product has endured a lot of personal tragedy in recent years, with the murder of two of his sisters in 2014 and 2019. Bullock has persevered through it all and has become one of the easier Knicks to root for, not only for his on-court production but his incredible volunteer work and activism off of the floor. Despite Bullock being overshadowed by bigger names like Barrett, Julius Randle, and Derrick Rose, his play will have a significant impact on the Knicks’ chances to beat the Atlanta Hawks in their first-round playoff series and going forward if New York moves on.

In three games and three victories against Atlanta this season, Reggie Bullock has been pretty good, averaging 11.0 points, 3.0 assists, and connecting on 44.4% of his threes, per StatMuse. One of his better games this season came against the Hawks on April 21st, where he drilled six triples and finished with 18 points.

Bullock’s quick trigger and ability to get shots off on a dime has been on display all season. What really makes Bullock’s season that much more impressive though is his propensity for hitting clutch time shots and stepping up in tight games on both ends of the floor.

Bullock forced overtime against the New Orleans Pelicans with a three-pointer as time wound down and recorded a huge steal in a 94-93 victory against the Orlando Magic back in March, where he made life miserable for Evan Fournier and didn’t even allow him to get a look at the basket. Obviously, the playoffs are a different animal and the quality of opponents won’t be that of the 14th-place Magic.

The Hawks rank third in the NBA in opponent’s three-point percentage (34.9%) and tie for eighth in opponent’s threes made per game (11.9), per NBA Stats. Atlanta has a plethora of long and athletic bigs who are capable of stepping outside to contest jumpers in Clint Capela, John Collins, and rookie Onyeka Okongwu. They also boast perimeter length in Kevin Huerter and De’Andre Hunter. Despite Bullock’s prior success against the Hawks this season, they don’t make it easy for opponents to score from the perimeter and Reggie will likely have to work hard for his points and/or improvise and look to beat these guys off of the dribble and distribute or get to the hoop.

With Randle, Barrett, and recently Rose carrying the bulk of the scoring throughout the season, Bullock will not be asked to score 25 points on a nightly basis. That’s just simply not his game. If Bullock can sprinkle in three, four, or even more triples and pester Trae Young and the other Hawks’ shooters, it will go a long way in the Knicks emerging victorious in this series.

On the flip side, if Bullock isn’t able to find a decent rhythm from three and is taken out of the game offensively, it could put a lot of pressure on a lot of younger, unproven guys to hit clutch shots on the big stage. With the Knicks already a pedestrian offensive unit as a whole, they will likely need those 12-15 points from Bullock to be able to win four games against an evenly matched and stingy defensive team like the Hawks, especially away from MSG.

Despite being on some solid playoff teams while a member of the Clippers and the Pistons a few years back, there have been a lot of inactives and DNP’s for Bullock, who only has only 14 points total in four postseason games, per Basketball-Reference. This lack of experience shouldn’t be a cause for concern but is something to keep in mind when analyzing expectations for Bullock and this Knicks team as a whole, which is built on several players with little-to-no postseason experience.

Despite his minimal contributions and opportunities in the postseason, Reggie Bullock has exuded tremendous confidence this season and has grown as a player from last year to this year. Bullock is also motivated to prove to himself that he can be a key piece on a playoff squad.

In games where Bullock was inactive or scored fewer than 10 points, the Knicks record is 15-20, opposed to 26-11 when Reggie is on the floor and scoring double digits, per Basketball-Reference. Simply put, the Knicks are in a much better position to win when Bullock is playing well and one can envision this coming to fruition in the playoffs, too.

»READ: Evaluating Reggie Bullock in the short-term and long-term