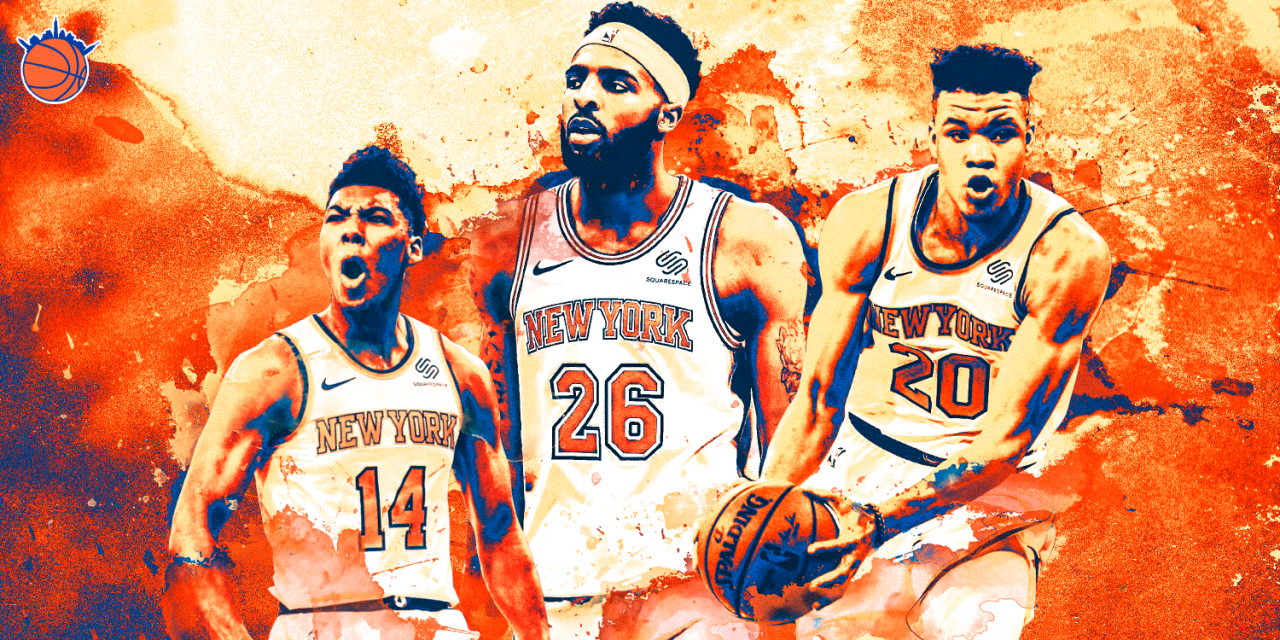 Allonzo Trier, Mitchell Robinson, and Kevin Knox have put up different results a quarter of the way through their rookie campaigns. How are the neophytes faring thus far?

The New York Knicks are young. That’s been the theme of the 2018–19 season as they pass the quarter mark. Not only are the Knicks literally younger than most teams—their average age is 24.6, not even old enough to rent a car in New York without incurring a fee—but their on-court product has also looked, well, young.

The Knicks, currently 8-20, have been up and down to say the least. They’ve earned wins against top dogs like the Milwaukee Bucks and the Boston Celtics. They’ve also been blown out by those same Celtics, as well as middling teams like the Orlando Magic and the Miami Heat. Their three rookies—Mitchell Robinson, Allonzo Trier, and Kevin Knox—have been similarly erratic, fluctuating from “how did any of the 29 other teams pass on these guys?” to “none of these guys know how to play basketball yet” on a nightly basis.

Let’s grade their performances as they head into the main stretch of the season.

You know which of the Knicks’ three rookies is leading the team in minutes played? I’ll give you a hint. He went undrafted.

Trier has been nothing short of a godsend for the Knicks, becoming their first man off the bench. He’s scoring at a solid clip, averaging 11.3 points per game, and doing it with polish. His three-point percentage (39 percent on a timid 1.7 attempts per game) free-throw percentage, and effective field-goal percentage are all stellar for a rookie that was close to being cut from the team.

What separates Trier is his confidence and fearlessness driving to the rim. He’s got an array of strong dribble moves and quick counters that, when executed well, nudge his defender just enough to get Trier a narrow lane to the hoop. When he gets to that lane, Trier is a master at using his size (6-foot-5, 200 pounds) and strength to protect the ball and create finishing opportunities around the rim.

What he does here isn’t spectacular like a soaring dunk or filthy crossover (which Trier’s had plenty of this season), but it’s harder than it looks. Trier zooms past a rub screen from Frank Ntilikina, then hits a little stop-and-go hesitation move to get his defender, Bruce Brown, out of rhythm and off balance. As soon as he sees his opening, he pounces but Stanley Johnson rotates from the weak side and Brown recovers, closing Trier’s window to get a layup. Trier essentially shakes both of them at the same time with a snappy quarter-spin before springing for two easy points.

That’s veteran stuff. A lot of lottery picks never reach that level of ball handling and creativity where they can manipulate defenses to their will, but it’s Trier’s bread and butter (again: this guy went undrafted). He even goes by the handle “ISO ZO” on Twitter, denoting his love for isolation trickery.

But, and I know I’m going to get heat for this, I think some of the pervasive optimism surrounding Trier is fool’s gold. He’s got the second-highest turnover rate of anyone on the team not named Luke Kornet, despite not having a gaudy usage rate. He’s a competitive on-ball defender, but doesn’t create many turnovers (0.4 steals per game, 0.4 blocks per game) and isn’t quick enough to mark the best guards in the league. And he tends to tunnel in on the rim too much when his outside shot isn’t falling, making Trier easy to game plan for.

This is a decent risk to take. It’s the end of a first quarter in which Trier’s team is getting demolished, and could use an aggressive finish to build some momentum heading into the second frame. But it’s a play Trier is too fond of. He puts his head down, outruns his entire team, and ends up turning the ball over one on three. If he had slowed down just a second (and there was plenty of time to do so), he could maybe have hit a trailing Knox for an open look from beyond the arc.

Trier’s tunnel vision has been the only serious blemish on an otherwise wonderful start to the season, though.

What planet did Steve Mills and Scott Perry find this guy on?

7-foot-1 with a 7-foot-4 wingspan. Freaky bounce. Runs the floor like a guard. Moves with liquid fluidity. If you weren’t paying attention to the name on the back of the jersey, you might think I was talking about some long-lost Antetokounmpo brother. Watch Robinson block a shot into the fifth row or, um, whatever ungodly term you want to give this. …

…and you might think he could join the ranks of Giannis one day as one of the East’s best young players. As of now, Robinson just doesn’t have the experience to turn his tools into weapons the Knicks can use every play. He tries hard on both ends of the floor, but his limitations are obvious. On offense, 82.4 percent of his shots come from within three feet of the basket, per Basketball-Reference. He’s also a putrid free-throw shooter, currently at 53.1 percent, and it seems like he actively avoids going to the line as a result. On defense, he hasn’t quite grasped the body positioning necessary to box stronger guys out or when it’s optimal to try and deter a shot at the rim versus staying vertical and stationary. In fact, you can see all of Robinson’s defensive struggles on this possession against Joel Embiid in late November:

Regardless, a prospect like Robinson is exactly what you want out of your late second-round pick whose still only 20 years old. He’s a salivating archetype—the uber-athletic big that doesn’t need to do much more other than block shots, catch lobs, and pester ball handlers to be successful.

After lighting the Summer League on fire with an Elon Musk blowtorch, Knox started the regular season off with high expectations. Before he had even played a single NBA game, pundits and fans were already envisioning him anchoring a post-modern frontcourt with Kristaps Porzingis as an elite stretch power forward.

Knox is averaging just 9.4 points, 3.8 rebounds, and 0.8 assists per game (via NBA Stats). He’s shooting 35 percent from the field. He’s not even hitting two thirds of his free throw attempts. What happened?

Well, Knox missed seven games in a row early in the season, throwing him completely out of sync with the rest of the team. It’s taken him a long time to warm up, and the Knicks have been way worse with him on the floor thus far. What seemed like a solid dark-horse bet for Rookie of the Year is now nothing more than a forgotten pipe dream.

But seriously, relax. Knox is going to be a good NBA player, mark my words. He’s too smooth, too long, too athletic to become anything less than a productive “3-and-D player,” arguably the most valuable player-type in the entire league. Until his rookie contract runs out, that kind of prospect will be invaluable to have, no matter how broken his shot looks.

And I can guarantee he won’t shoot 35 percent for the rest of the season. Knox’s mechanics are compact, quick, and consistent. I don’t know if he’ll ever be a great shooter, but defenses will have to guard him out there, which will open up all kinds of driving lanes for him.

Knox 3 off a kickout pic.twitter.com/DdsGmuNrKs

The most disappointing thing about Knox so far, though, is how invisible he can be for long stretches. He showed similar passivity at Kentucky, probably one of the reasons he fell to ninth in the draft, and it’s only been amplified in the NBA by his lack of confidence and injury issues. Especially with Porzingis absent from the team, Knox has to show he’s got a bit of “dog” in him, and blow by guys that shouldn’t be able to match up with him.

Too often, Knox settles for these kinds of looks:

There’s a big difference between getting value from the three-point line, make or miss, and taking a bad shot; Knox lands on the wrong side of that equation here. He does a great job of getting Jaylen Brown to bite on his pump fake (Brown even leaves his feet!), but instead of swinging the ball to Trier, open in the corner, or putting the ball on the floor to probe the defense for an opening, Knox settles for a 26-footer that clanks off back iron.

It’s frustrating to watch. It seems natural for a player like Knox to play “outside/in,” setting up drives with the threat of his outside shot, but he’s been adamant on playing “outside/outside” basketball. There’s just not a lot of thought in his game yet, which makes all the obvious potential he holds all the more vexing.

Look past the glorious lobs to Robinson, the fearless drives of Trier, and the tantalizing future with Knox, and these Knicks have played exactly how one would expect from a bunch of dudes in their early twenties. They make bone-headed turnovers in crucial moments. They collapse in crunch time from over-eager hero ball. They are NBA babies, and we should treat them as such, giving them time to grow, to learn, to mature. No one should excuse them for their ugly start to the season, but we should all practice a little patience or we’ll risk missing something special brewing right in front of us.

Why? Because there have been flashes, fleeting stretches of good basketball, that make it unwise to be anything but hopeful for this team’s prospects. We’ve already talked extensively about the rookies, but there have been even brighter spots down the roster—Noah Vonleh has been a diamond in the rough, Emmanuel Mudiay might have saved his career, and Tim Hardaway Jr. has finally earned his reputation as a high-level scorer. The Knicks—for the first time since Isiah Thomas chewed up the franchise, chased it with Scotch Bonnet salsa, and left it a hot mess in his toilet bowl—own real asset flexibility and leverage. Not all of their youth will pan out. But all of them (except Ron Baker) carry legitimate value in the league. That’s a sign that, despite the growing stack of losses, the Knicks’ rebuild is right where it should be.