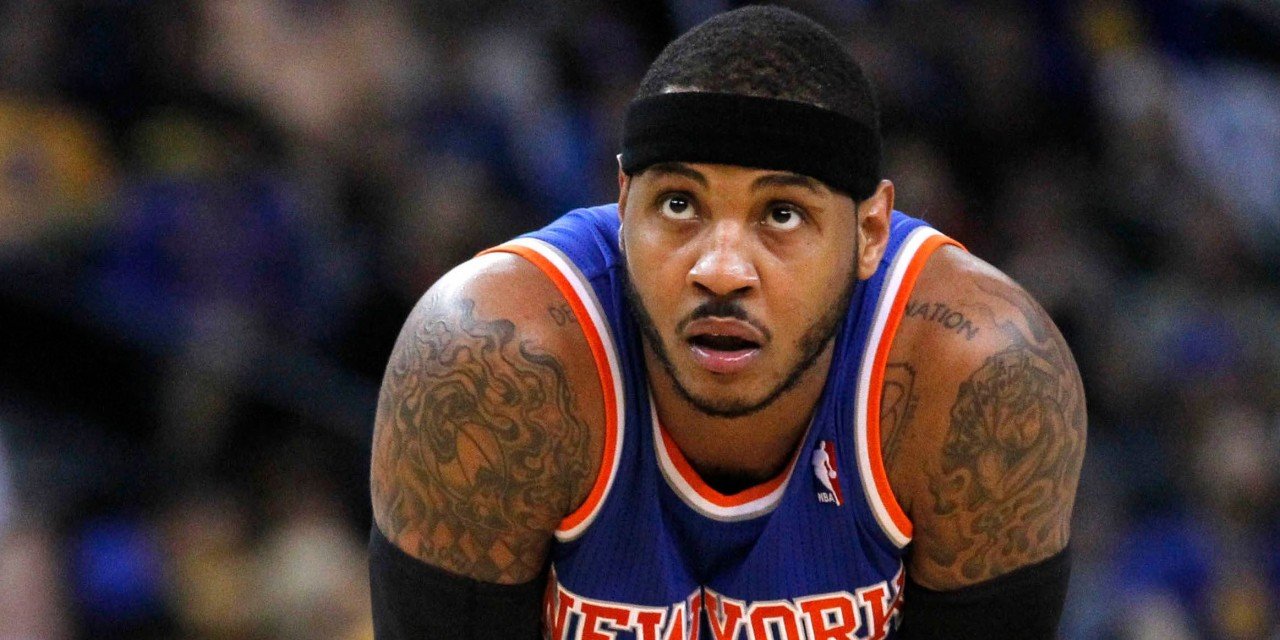 The New York Knicks would have considered re-signing former All-Star forward Carmelo Anthony in the offseason if the franchise also “landed two major free agents,” per The Athletic’s Shams Charania.

Anthony, 35, spent six-plus seasons with the Knicks from 2011-17, earning a scoring title with the team during his tenure and making seven All-Star Game appearances, too.

[If] the Knicks had acquired two major free agents, such as Kevin Durant and Kyrie Irving, this summer, the franchise planned to consider bringing back Anthony on a contract … At that juncture, the Knicks would have been at a contending stage with a team built around veterans. Now, New York is rebuilding around a blend of young talent and accomplished players and has a full roster. Anthony did also receive a standing ovation in his return to Madison Square Garden in late January.

Following an underwhelming season with the Oklahoma City Thunder and a bizarre 10-game stint for the Houston Rockets, Anthony has struggled to gain serious attraction with any team.

A Carmelo Farewell Tour would have worked on a few levels. First, it would have given ‘Melo the opportunity to retire on his terms. Second, it would give the younger guys a mentor. We have seen clips of Anthony in the lab with Donovan Mitchell and Kyle Kuzma; that could have been his role with R.J. Barrett and Kevin Knox. Vince Carter played a similar role last season on a young Hawks team.

Lastly, and most importantly, a ‘Melo reunion would be yet another example of the culture shift going on in MSG.

The major knock on the Knicks continues to be their inadequate “culture.” It is reportedly what turned Kyrie Irving off about potentially signing, which in effect also swung Kevin Durant over to that team across the East River. Culture goes beyond who owns the team or who runs the front office. It’s how they treat their players, both current and former.

It is hard to disagree with Irving and others who voice a similar opinion on the culture at MSG. The Knicks have not exactly taken care of their legends.

The well-documented Charles Oakley fiasco; Patrick Ewing never being interviewed for a head coaching vacancy (or any coaching vacancy); Bernard King’s no. 30 still not being hung in the rafters are glaring examples. Giving Carmelo his ride off into the sunset, and possibly playing meaningful basketball one final time, would have been a paradigm shift for the organization.

Anthony left New York on okay terms after a nasty, and extremely public, feud with Phil Jackson, but it is still difficult to say the Carmelo era ended on a good note.

On the Jackson note, Charania adds:

Kurt Rambis, who is now a significant part of the Lakers’ front office, was part of the Knicks’ Phil Jackson regime that had a tumultuous final stretch with Anthony.

General manager Scott Perry and team president Steve Mills did their best to smooth things over and got a deal done where ‘Melo was sent to a title contender, but it came after a year of his name being dragged through the mud. Sending Anthony off properly would have been the first noticeable act of the team giving a legend proper sendoff since, well, ever.

Mentor ‘Melo could still be an option down the road depending how things shake out during the season, but for now, it appears that door has closed.

»READ: Should the Knicks bring Carmelo Anthony — a debate

»READ: The most impactful trades in Knicks history, part II