The Rest of the Season Is About Investing in RJ Barrett 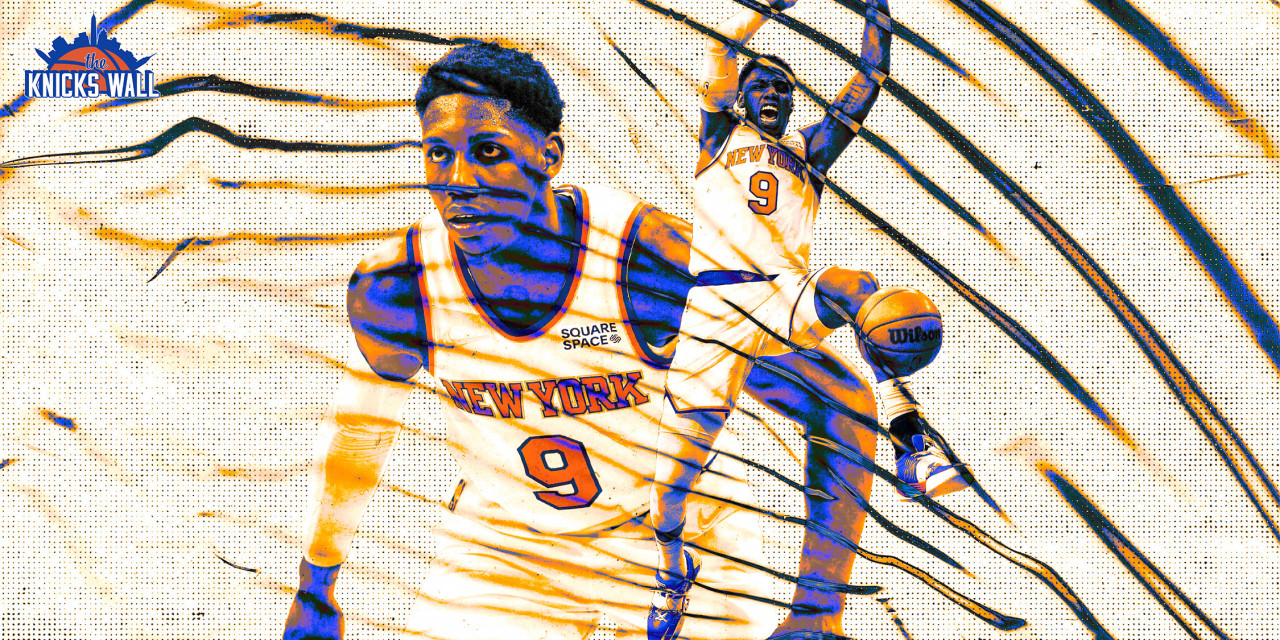 RJ Barrett is starting to blossom into a bona fide star. The Knicks need to realize this and play through him frequently.

“If you’re going through hell, then keep going.” The wise words of Winston Churchill should be the adopted motto of the 2021–22 New York Knicks.

Regression for the pandemic miracle season was expected. Slipping back to the basement of the Eastern Conference was not expected, nor should it have been. The organization, from Leon Rose down to Tom Thibodeau, made just about every wrong move you could make following a playoff berth.

Thibodeau squeezed every bit of potential out of a team that featured marginal free-agent signings on team-friendly deals. Instead of looking to take a swing last summer, the front office brought back the core of a roster that very likely had just capped out their potential as a group. The result has been a numbing slide back to the norm; the good moments fleeting, with the bad ones lingering.

The 2022 portion of this season has been particularly painful. The Knicks won a single game since January before last night and are 4-16 over their last 20 games, including two overtime losses and double-digit leads in six of their last season losses before the Clippers win. Kemba Walker has been given his walking papers while Derrick Rose waits for a return that may not come until next season. There is no real reason for a fan to be invested in the team that is 26-38, going nowhere fast.

Well, there is one reason. “At least we have RJ” should be the adopted motto of Knick fans. RJ Barrett has trended opposite of the team. The third-year leap fans feared did not come arrived in the new year. Barrett has gone on a tear in the new year, including six games of at least 30 points or more.

Consistency has been the one thing preventing some from fully buying into Barrett. In his previous two seasons, there were streaks where he looked the part of a star, but it never fully came together. Barrett had one 30-point game in his career before this season. He has eight and counting this season, six of them coming in 2022.

Barrett has finally killed the boy and fully re-embraced the “Maple Mamba” moniker, becoming the Knicks’ killer in the process. His statement game against the Miami Heat was a peek into what is possible for Barrett.

The Maple Mamba went right into the teeth of one of the top defenses in the league. And had he hit his free throws, Barrett would have eclipsed 50 points.

The masterclass was a culmination of the progress he made just before he rolled his ankle in an ugly loss in Denver, an injury that cost him the final four games before the All-Star break. Barrett had been averaging 23.0 points per game on 42.5% shooting from the floor, 37.2% from deep (on 6.1 attempts per game), and 68.5% from the free-throw line in the 15 games before the injury.

Barrett’s ascension should rejigger the priority list of the organization. Right now, the Knicks sit in the worst spot imaginable: purgatory. They are not good enough to think about the playoffs, yet not bad enough to daydream of the top picks available—and the trade doors acquiring such a pick could open.

At 26-38, the play-in game feels equally distant from bottoming out for a meaningful draft pick. At best, an all-out tank from here would net the sixth or fifth pick. The play-in game would require quite a win streak, and right now a single win feels like an adventure.

That leaves the Knicks with only one thing to do to salvage the season: do everything in their power to get Barrett accustomed as the face of the franchise. See what type of players Barrett plays well with on the roster now, which type of players would fit best to replace the pieces that don’t fit well around Barrett.

Thibodeau has begun the process by putting the ball in Barrett’s hand more. In the last few games, it has been Barrett controlling the first possession, not Julius Randle. Barrett has returned the vote of confidence with unrelenting aggression. Perhaps learning from the shortcomings of his running mate Julius Randle, Barrett has rarely settled on offense.

Whether he is leveraging his strength on drives, utilizing post-ups, or finessing his way to the rim, Barrett has made sure to put pressure on the defense. He has found his spots on the floor and is no longer just taking what the defense gives him but taking what he wants.

The Knicks are nauseating to watch but RJ is a killer pic.twitter.com/FrfHvu46wM

As Barrett, extension eligible this offseason, has climbed up the food chain, he has not forgotten about his big man. Mitchell Robinson, an impending free agent, is an important piece to the puzzle of the future. At times, it seems like Barrett is the only person that remembers that. His chemistry with Robinson has only grown, allowing the center to remind the world of what a lob threat he can be if someone actually throws him a lob.

That RJ to Mitch connection is something else pic.twitter.com/jwHTVIg2kV

Not having a point guard is a reason Barrett has recently resembled the type of guy he was at Duke, where he controlled everything. With limited options—in Thibodeau’s mind—the Knicks have gone the non-traditional route with Alec Burks at point guard. The experience has gone a lot like a Westerosi wedding.

Having a pure point is ideal; however, Barrett can thrive with a non-traditional, or “position-less” as Burks would say it, point guard. The problem is, Thibodeau is playing Barrett with the wrong one.

There is a tweak Thibodeau can make other than removing Burks from the starting lineup, a move that will only be made possible by a healthy Derrick Rose. It is staggering Randle and Barrett, playing Barrett with Quickley more than Burks.

To be fair, Immanuel Quickley has not given many reasons to get a promotion, yet remains the best point guard option to play Barrett with most of the time. Cold shooting and suspect shot selection hold Quickley back from a larger role. Over his last five games, Quickley has shown promise, averaging 14.6 points per game on 48.0% shooting and 44.0% from beyond the arc. The second-year former Kentucky guard poured in 21 points and 10 rebounds last night against the Clippers.

That version of Quickley is exactly who Barrett needs: a guard who can space the floor, self-create when needed, and lock up on defense. The most underrated, or annoying, aspect of Quickley remaining behind Burks is that Quickley is the best two-way option.

Dull defense has translated to fewer opportunities for easy buckets. Barrett is ready to run, and when he shares the floor with same-minded players, the results are usually good. Quickley is one of those guys same-minded guys, as is Cam Reddish.

Reddish has entered the rotation at last and provided needed energy into the defense. There are more reasons to want to see more Reddish. He and Barrett’s chemistry pops off the screen when they play together. But top of the list is Reddish’s ability to be a disruptor in the passing lane.

There are 18 games remaining, there is no coherent counterargument for making every effort to amplify Barrett’s growth. Whether it is switching up the starters or simply mixing up the staggering of lineups, all energy should be used on seeing who else is worth keeping with Barrett.