For the Knicks, Retaining GM Scott Perry Is a Step Backwards 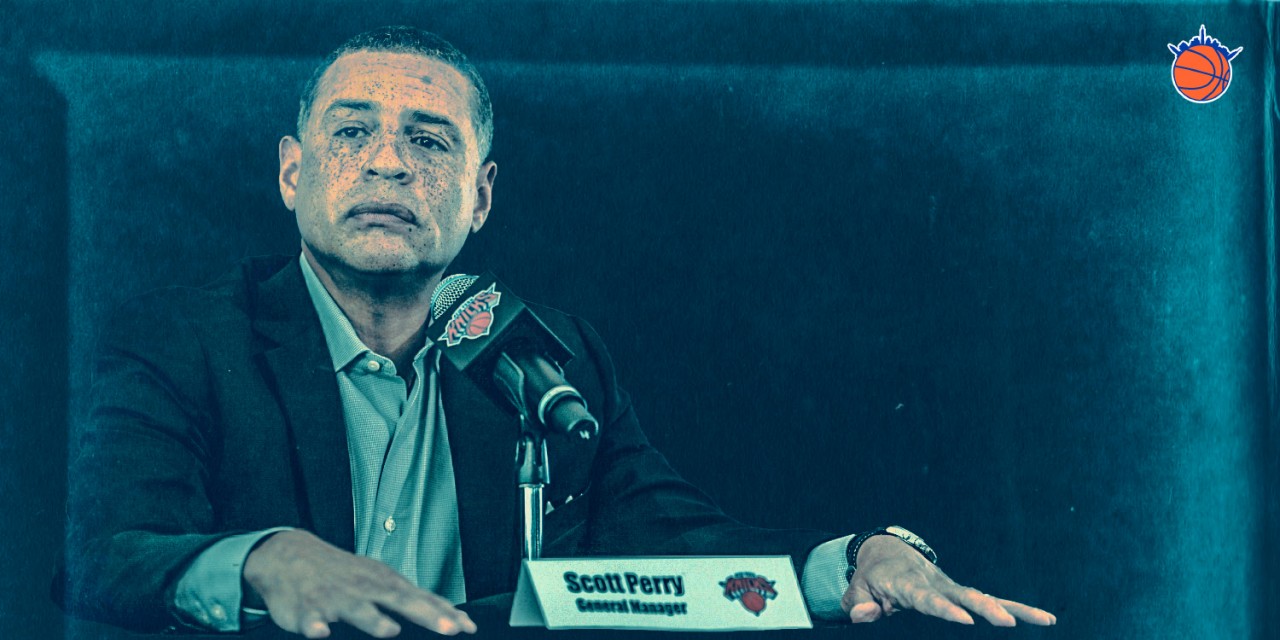 New Knicks President Leon Rose decided to exercise leftover GM Scott Perry’s option for next year, which was a mistake.

The New York Knicks took another plunge in renovating their front office after the reassignment of Steve Mills and the hiring of Leon Rose to the role of President of Basketball Operations. Last week, the Knicks hired Cavaliers salary cap expert Brock Aller to a “high-ranking” role, which was met with praise due to Aller’s role in some of Cleveland’s salary cap maneuvers to re-acquire LeBron James.

The latest move, however, will be met with confusion from the basketball world and the Knicks fanbase.

On Wednesday, Newsday’s Steve Popper reported that the New York Knicks would retain General Manager Scott Perry for the 2020–21 season, amidst front office turnover. There were concerns that the new team president, Rose, would move on from Perry after replacing Mills, who was reassigned to a non-basketball role on February 4th.

It feels as if the Knicks are wasting another chance to make a true change among their front office and roster.

Since hiring Perry to the GM role on July 14, 2017, the Knicks have failed to win more than 30 games in any of his three seasons there. While their draft pick selections have been buoyed by the selection of Mitchell Robinson in the second round of the 2018 draft, Kevin Knox—the eighth overall pick of the same draft—remains one of the worst players in the league.

Under Perry and Mills’ watch, the Knicks have failed to develop two lottery picks and 2019 first-round pick R.J. Barrett during his abbreviated rookie season. That, and the 2019 offseason, remain an abomination to team construction, as the Knicks spent close to $70 million on new players, winning just four more games than the previous campaign.

SNY’s Ian Begley suggested that the move was based more on the relationship between Perry and Leon Rose, leading back to the Carmelo Anthony trade of September 2017.

In 2017, Leon Rose worked closely with Scott Perry on the Carmelo Anthony trade to OKC; Rose had leaned on Perry since taking over as NYK president. So Perry’s one-year deal to be GM under Rose doesn’t mean he’s just a short-term bridge to another GM: pic.twitter.com/UpcYGA8MiH

Take a closer look at Perry’s track record and the question looms larger: Why are the Knicks saving a front office member who has lacked success in any of his previous two tenures?

With Perry as the second in command to Rob Hennigan, the Orlando Magic hit on two of their four draft picks (Victor Oladipo and Aaron Gordon) and the former didn’t truly develop until his departure from the franchise. In his three-month stint in Sacramento, Perry oversaw the selection of franchise point guard De’Aron Fox but clogged the roster with failed veteran moves like Vince Carter, Zach Randolph, and George Hill.

It’s hard to divvy up the blame among front office members, but while Scott Perry has been the second-in-command in his previous stops, there’s no track record over the last decade to suggest that he should be in charge of anything outside of being a voice in the draft room, where his success has been hit or miss recently. Placing him in a GM role, even with Rose at the top of the food chain, is a lackluster move.

The bigger, underlying issue here is the lack of initiative by New York, Leon Rose, and ownership in truly revamping this front office. Instead of conducting an actual search and loading up on talented front-office members, the Knicks remain aloof, continuing to eschew a true talent search for hiring people based solely on past relationships.

The general manager position is important to the team president’s role because of Rose’s inexperience. Rose needs to solidify his front office with experienced front-office members who have succeeded in multiple aspects. Aller has had success as a salary cap expert, which will assist in rebuilding the roster around a group of young talent. The decision to retain Perry doesn’t do much for that. Even his recent draft record has been spotty at best.

The New York Knicks have an important offseason ahead of them and so far, mistakes have been made when it comes to renovating the front office. The decision to offer Leon Rose the job before interviewing anyone else was puzzling at the time, but one can justify it based on the trend of former agents-led front offices and Rose’s power during his tenure as an agent. The decision to retain and extend Scott Perry after one of the worst seasons in Knicks history is confounding.

Deciding to keep Perry as the GM after a dubious free-agency haul this past offseason and lackluster draft selections is a puzzling move from Leon Rose and the New York Knicks.