The Return of Frank Ntilikina: Do the Knicks Have the Guard’s Back? 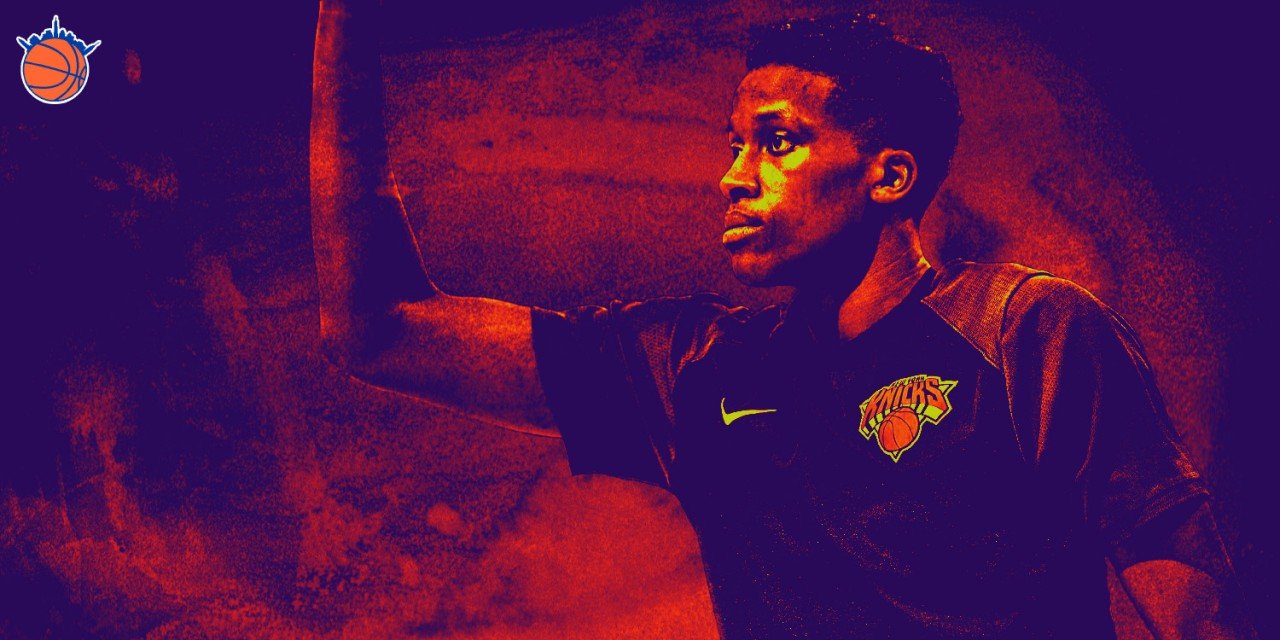 With 12 games at most to prove himself to the front office before season’s end, the return of Frank Ntilikina from injury and fit next to Dennis Smith Jr. will be closely watched by the front office.

When the Knicks were on the clock with the eighth pick in the 2017 draft, the choice was about more than just a player—it was about how the team wanted to mold its identity from the ground up.

Committed to rebuilding the right way, at least in theory, and with a potential star-who-shall-not-be-named big man in tow, the team had to choose between a defensive sieve and an offensive dynamo at the point to build their identity around. Strangely, it seemed fated that Frank Ntilikina and Dennis Smith Jr. would one day play together.

Fast forward to today and Knicks faithful have to wait even longer to see them share the floor. While Dennis Smith Jr. has been winning hearts with his physics-defying slams and surprisingly adept court vision, Frank Ntilikina has continued to nurse a injured groin that has held him out of game action since January 27th—20 straight games.

Marc Berman of the NY Post reported that the Frenchman will not travel with the team for the rest of their three-game road trip, which began in Minnesota. His next chance to fulfill the dreams of fans salivating to see him play next to DSJ will be Sunday at home against the Lakers.

That would leave 12 games for Frankie to prove himself to the front office, which has reportedly entertained the idea of dangling him in search of another first-rounder in this upcoming draft.

While we don’t know the extent of what happened with Ntilikina’s injury, groin injuries are typically pesky and can linger. There’s a distinct possibility the Knicks hold him out the rest of the season to protect their “investment” with so few games remaining.

Moving forward under the assumption that his recent ramping up of physical activities is an indicator he should be back soon, what can we expect from the young guard in his return?

DSJ pretty much has the first-unit primary ball-handler position on lock right now, and Coach Fizdale has been more inclined to play Frank off-ball through this season anyways. It would be foolish to expect Fizdale to give Ntilikina a starter’s workload upon his return, as he’s averaged just over 20 minutes a game this season. But there should be some overlap of the Knicks’ two 2017 mid-lottery guards. Fiz expressed a desire to play them together, and spoke on how they could complement each other after they acquired Dennis.

Ntilikina’s 20 minutes a night will probably come out of Dotson and Trier’s court time, both of whom had been playing decently well. He’ll probably get to play a good amount with Mitchell Robinson as they’ll both be coming off the bench. The most interesting pairing, however, is going to be with DSJ. And we know the front office is watching closely.

The logic is easy to understand. Frank would be able cover for the statistically disastrous defense of Smith, and Smith could keep the offense afloat by getting into the teeth of the D while Ntilikina hopefully becomes a catch-and-shoot threat. There are a few problems with the vision, though.

Frank hasn’t found any real rhythm this season, be it because of the inconsistent or out-of-position playing time or nagging injuries. He’s shown barely a lick of improvement on the offensive end and even regressed as a defender.

Opposing teams’ effective field goal percentage last season was 2.8 percent worse when Frank was on the floor, but this year it’s just 0.1 percent worse, per Cleaning the Glass. He’s just looked a step slower on that end. And he has remained one of the worst shooters in the league, as evidenced by all the red below in his splits:

His inability to shoot the ball is unsettling next to DSJ, as it tightens the NC State product’s room to maneuver on drives. Ntilikina’s poor shooting seems as much a confidence thing as a form thing though—he still needs to fix the slight hitch. Maybe 12 games could be enough for Frank to get a little bit hot from deep and string together a few nights shooting over 50 percent. Maybe that could be enough to pump some confidence into his offseason workouts, or to stop the Knicks from trading him.

If he’s going to be an off-ball player going forward, the key to unlocking the rest of Frank’s game is all in his jump shot. He entered the league much more comfortable with the ball in his hands, but was coming from a place where the playing style was more about constant flow and ball movement. During an interview in French, Frank said that the NBA is much more about one-on-one play than he was used to. Frank doesn’t have the footspeed to beat anyone one-on-one in a closeout situation unless they close out hard—and they won’t until he’s canning at least 35 percent of them, and not so hesitant to get them off.

Though Dennis’s gravity on drives manipulates defenses, he’s not too good of a shooter either. His career splits are almost as bloodshot as Ntilikina’s.

The front office is trying to discern if this fit could be long-term, but basing their decision on a potential 12 game sample is not a smart thing to do here. Frank probably won’t be very good coming off the injury, as he tries to regain his footing at game speed. The fit with DSJ is going to be clunky at first, given they’re both pretty much non-shooters at the moment.

With some time to develop, it’s possible the partnership could bear real fruit in the future. I wrote something of a scouting report on Ntilikina about 20 games into his Knicks career. Much of that potential remains untapped.

The word “project” was thrown around a lot when a soft-spoken 18-year-old from abroad was drafted. The front office preached patience, and here lies another opportunity to show it by not trading him during the draft—unless it somehow nets you Zion.

Ntilikina shows playmaking flashes and his assist percentage is league average among guards, which is good for a second-year player. He’s a rare type of voracious defender with good instincts and length that translates. He has all-defensive NBA potential if he adds more bulk to his frame. If he can find some consistency with the shot, which he may need to spend the summer with a shooting coach to do, it will open up space for him to use that shy craftiness.

A lot of things have to go right, but if you squint, you can see the outline of a stellar backcourt of the future. The Knicks hired a coach this offseason specifically because he was good at player development, so let’s give the players some time to develop.