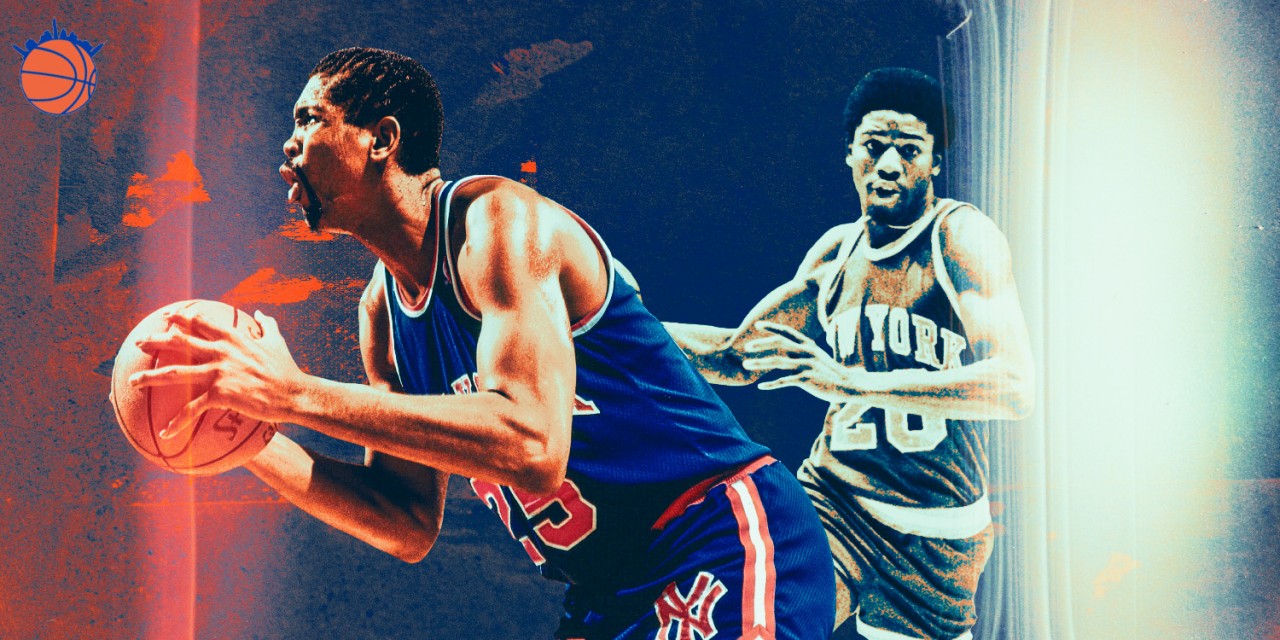 The Knicks, at one point, had a very young team coached by a man known for his preference for veterans. It turned into a 50-win season in the 1980’s.

Of the New York Knicks’ 13 50-win seasons, 11 came with either Willis Reed or Patrick Ewing. In the two instances in which the Knicks reached the mark sans Hall of Fame center: one featured the peak of Carmelo Anthony’s tenure (2012–13), and one was…1980–81. The Ewing, Reed, and Anthony eras are vividly ensconced in Knicks lore, but what happened in ‘81? Let’s revisit another random season of Knicks past.

The Knicks won just 39 games in 1979–80, but a new era steered by rookie Bill Cartwright (21.7 points per game in 1980) and sophomores Micheal Ray Richardson (league-leading 10.2 assists and 3.2 steals) and Toby Knight (19.1 PPG) was underway. In 1980, the young team narrowly lost out on the final playoff spot via tiebreaker thanks to a Julius Erving game-winner in the season’s final game. Nevertheless, the future seemed bright in New York.

In the 1980 draft, the Knicks selected two future head coaches: Mike Woodson at no. 12, and Kurt Rambis in the third round (later waived).

In the wake of Knight’s devastating knee injury, general manager Eddie Donovan acquired Campy Russell from the Cleveland Cavaliers. The 6’8″ wing made the All-Star team in 1978–79 (21.9 PPG), and was coming off a 1980 season in which he put up 18.2 points a night in 41 games.

Perhaps the biggest development of the offseason, though, came on August 20th, when the Washington Post released a jarring report on the league’s issues with “free base” cocaine. “It’s really scary. Some of the best players in the league…are into free base…I’m afraid it could get out of hand.” one player ominously told the Post. Another player said cocaine was “rampant…like drinking water,” in league circles.

Nevertheless, expectations were relatively high heading into 1980–81, and the team largely validated those forecasts.

The best player was Richardson. A unique, 6’5″ defensive stalwart with flare and the best rebounding point guard in the league, “Sugar”—selected two picks ahead of Larry Bird in 1978—was quickly, and perhaps unfairly, dubbed the next Frazier. He had shined in his first two years, and seemed prime to lead New York into the next decade as an East Coast Magic Johnson.

Richardson struggled with the lifestyle. “He partied at Studio 54…he disappeared at inopportune times…and amid that erratic behavior he would tantalize you with absurd lines like the 27 points, 15 rebounds, and 19 assists he put up against Cleveland in March of ’81,” Michael Weinreb wrote for Grantland. “He was one of the most fascinating messes ever to sweep through the five boroughs. He was brash and sympathetic and restless and afraid of nothing.”

For the 1980–81 campaign, Richardson was predictably unpredictable. He averaged 16.4 points, 7.9 assists, 6.9 rebounds and league-leading 2.9 steals per game, but turnover-prone stretches and shooting slumps contributed to the team’s general streakiness; they had five losing streaks of at least three games and seven winning streaks of at least three games.

However, ignited by Richardson’s (Clyde voice) kleptomania, the Knicks shined on defense. The team was fourth in steals and forced 20.2 turnovers per game. As a result, they placed top 10 in opposing points per game (106.3) and Defensive Rating (104.4).

Despite the efforts of the best rebounding guard in basketball, the presence of two seven-footers in Cartwright and Marvin Webster, and Sly Williams, the Knicks were cripplingly soft inside. They finished 20th (of 23 teams) in rebounding and blocks. Cartwright was skilled on the offensive end, but often bullied physically, while Webster provided rim-protection but was limited offensively.

The other problem for this young team was a lack of discipline. They committed the third-most fouls and allowed 25 free-throw attempts per game, the most in the NBA. Perusing through various game recaps like this one, it’s evident that the team’s lack of poise and possession-to-possession unpredictability often plagued them in crunch time.

À la the “Bomb Squad,” these Knicks placed amongst the leagues’ best three-point shooting squads—though in 1981 that meant literally almost nothing. They averaged under one made triple per game (0.9), which was fifth best in basketball. They were decidedly mediocre in nearly every other major offensive category, and Red Holzman, a famed preacher of ball-movement, couldn’t find another assist man besides Richardson.

But the best feature of this team may have been its balance. In addition to Richardson’s production, Cartwright averaged 20.1 points (55.4% from the field) and 7.5 rebounds per game. Combo guard and team captain Ray Williams dropped 19.7 points, while Russell averaged 16.4 points. The talented starting lineup, which Holzman relied heavily on, was well-equipped to rack up regular season wins.

Still, the roster wasn’t ideal for the 60-year-old Holzman—in his 12th and penultimate season roaming the Knicks’ sideline. The coaching legend famously didn’t trust young players, yet he had a roster exclusively comprised of them. To Holzman’s credit, the team improved as the season progressed, going 19-9 post–All Star break, causing Holzman to praise their maturity after a hard-fought loss to the Los Angeles Lakers.

A major factor in the uptick was the midseason emergence of Sly Williams. After struggling as a rookie, Williams became a key offensive rebounder and steady passer from the 4 position. The team’s best stretch corresponded with his re-insertion in the starting lineup on February 6th. (Here’s Williams looking like Idris Elba in those classic kits).

”Sly has great instincts and gives us a new dimension and a big lift down low in our inside game,” said Ray Williams. ”He is more conscious of where the bucket is and he helps us with our rebounding. He’s the main reason we’ve had success offensively and defensively.”

“He passes and handles the ball so well it’s like having another guard, but he does the work as a forward,” Holzman said.

On March 24th, the team retired Dave DeBusschere’s no. 22.

In the end, the 35th season in franchise history saw a third place in the Atlantic Division, behind 62-win Boston Celtics and Philadelphia 76ers teams.

In the playoffs, the Knicks drew Jerry Sloan’s Chicago Bulls, who were riding an eight-game winning streak and posed the worst possible matchup besides Boston or Philly. The Knicks had only three players with playoff seasoning, and their problems with inexperience and interior strength reared its head in the series (still best-of-three in that day).

Chicago fielded a veteran group around Reggie Theus, and the imposing 7’2″ Artis Gilmore and his frontcourt mate Dave Greenwood dominated the Knicks frontline.

In Game 1, a 120-110 Bulls win, Richardson (4-for-16 from the field) and Cartwright (3-of-9) combined for just 20 points. Russell (17 points) and Ray Williams (19 points) were the only guys in double figures; the team shot 40.7% from the field (1-of-7 from downtown), and bricked 10 free throws. Gilmore’s presence prevented the Knicks backcourt from attacking the paint—an essential component to Richardson and Williams’ games. Gilmore (16 rebounds and seven blocks) and Greenwood (17 points and seven boards) frankly owned Cartwright, Sly Williams, and Webster.

“The Knicks played as if they were starting the 82-game schedule”, wrote the New York Times. (To make matters worse, Madison Square Garden was reportedly 5,000 short of capacity for Game 1, an indication of the league’s fledging popularity at the time).

The Knicks played with more heart in Game 2, but Richardson struggled again (4-for-17, though six steals). Russell (29 points) and Ray Williams (24) delivered, but Cartwright (5-of-9 FG) was similarly bulldozed by Gilmore (25 points, 10 rebounds). Sly Williams came to play, too, (9-of-11), but Theus (37 points, 11 assists) was too much to handle. Again, the Knicks’s lack of playoff experience came back to bite them: they blew a 14-point second-half lead, missed 10 free throws, then lost in the final minute after—what else?—a reckless foul by Williams.

Disappointed by the premature elimination, the front office entered the offseason with an ascending team but an aging coach with well-earned clout. Coming off a solid coaching performance but with retirement in sight, Holzman was thirsty for veterans, and knew they needed another piece.

That piece was nearly Kareem Abdul-Jabbar, but instead the Knicks traded their upcoming first-round pick (no. 17) to Cleveland for 32-year old guard Randy Smith. In June, they traded Woodson to the New Jersey Nets for another 32-year old guard, Mike Newlin, who had averaged 21.4 points per game for an abysmal Nets team.

“We were just calling around, and suddenly we had a trade.” Donovan self-owned. “The whole thing took about 15 minutes.”

Woodson was praised for his maturity, but only got 11.4 minutes per game as a rookie. “It all goes back to Red. He just doesn’t play rookies,” Woodson said after the deal.

The Knicks traded Ray Williams to the Nets in October, and dealt backup Mike Glenn to the Atlanta Hawks. These were Richardson’s two best friends on the team, which did not help prolong Sugar’s stint in New York.

Collectively, these moves halted any progress the team had made over the past two years, and they would regress to 33 wins in Holzman’s final season. By the ’84 playoffs, the Knicks only had two players remaining from their 50-win ’81 campaign: Cartwright and Ray Williams, the latter had returned after stints in Jersey and with the Kansas City Kings.

Richardson was dealt to the Golden State Warriors in 1982–83 for Bernard King. In 1986, he was banned from the NBA for drug violations.

Ultimately, this team’s youth was in a challenging era; Holzman’s timeline, Cartwright’s shortcomings, and Richardson’s downward spiral all contributed to the franchise’s up-and-down run in the first half of the 1980’s. When you add it all up, it’s nearly miraculous the 1981 squad even won 50 games in the first place.

The ’81 squad is a noticeable outlier on the Knicks’ franchise index page, but the team represents an era of “what could’ve been”—even if they did (mostly) hold it together for one season.