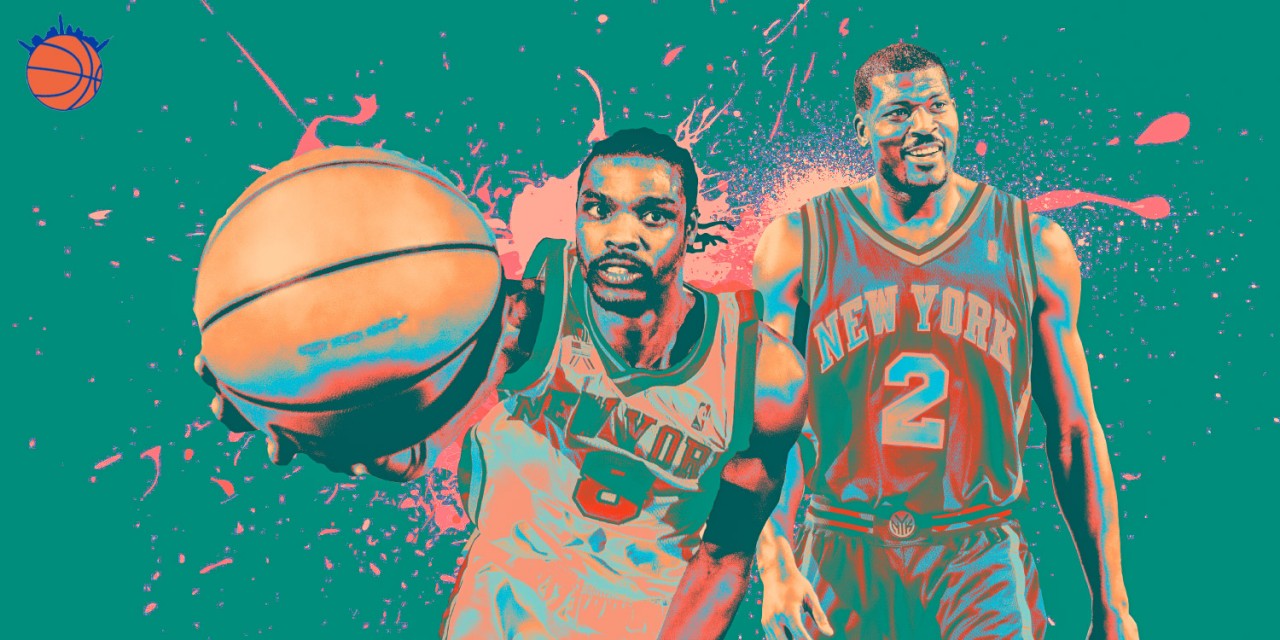 After the incredibly strange 1999 Finals run the previous year, the 1999–2000 Knicks were at a crossroads in the franchise’s history.

The New York Knicks began the century at the end of an era. They had enough juice to follow up their improbable ‘99 Finals run with a gritty 50-win season and another deep playoff push, as Patrick Ewing’s watch came to an end.

Where the Franchise Was at

The Knicks expected the 1999–2000 season to be another one of contention, armed with a roster that was neither young nor star-studded, yet completely respectable.

Scott Layden was named general manager six weeks after the selection of Frederic Weis—who would be murdered by Vince Carter that summer and was never seen in the NBA.

Unless you count signing John Wallace and Andrew Lang, Layden’s first major move was signing Latrell Sprewell to a five-year, $61.8 million extension, though the talks dragged after Sprewell went AWOL and missed training camp for a cross-country road trip to address a civil suit for …driving violations. Irked, the Knicks threatened to trade Sprewell before a deal was struck. The new contract included a promotion into the starting five and as the co-offensive focal point, along with Allan Houston.

Ewing’s diminishing productivity—coinciding with his own contract year—was thought to be the team’s biggest question mark, and was certainly the “A “plot. “[The Knicks] have all the components for a title, except…a center they can count on,” The New York Times assessed. “For all the bluster…Ewing needs to return to health before the Knicks can entertain championship thoughts.”

Regardless, the Knicks brought an experienced squad of familiar faces into the season. Pushed by head coach Jeff Van Gundy and defensive specialist Tom Thibodeau, they would, arguably, exceed expectations.

Sprewell and Houston were the shot creators while Ewing and Larry Johnson flanked with size and guile. Marcus Camby, Kurt Thomas, Charlie Ward, and Chris Childs provided reliable defense and nothing flashy. They had no superstars, yet had “a lot of guys that can put the ball in the basket. On any given night, you don’t know who’s going to be,” Sprewell said.

They embodied the sluggish era; content to game-manage like the 2000 Baltimore Ravens. They operated at the slowest pace in basketball and attempted the third-fewest shots, resulting in the 27th-ranked offense (92.1 points per game). They shot the three well (37.5%) but, regrettably, took just 11.4 per game. The NBA had eliminated hand-checking to promote fluidity, but the memo didn’t reach Van Gundy’s desk. Instead of “Top 10” plays, the Knicks cooked up a menu of post-ups, long twos, and awkward veteran mid-range stuff. (Also: wins.)

“The league is based on highlight films, ballet,'” Childs said. ”We’re an old bump-and-grind-type basketball team. A lot of people don’t care to watch or enjoy that type of basketball…We’re not out there to win a contest of being nice guys.” (In April, “2000 Good Guy Award Winner” Childs would plant a lick on Kobe Bryant.)

This was not exactly the 2015 Warriors. They essentially traded isolations, with Sprewell (15.9 field goal attempts per game) and Houston (15.5) garnering the majority of looks, followed by Ewing (12.5) and Johnson (9.3). They finished 27th in assists—Ward and Childs combined for 8.2 per game—and would have profoundly benefited from a playmaking point guard. However, they cobbled together just enough points to supplant their defense.

Like the 2000 Ravens, trying to score on them was like an uphill climb into a brick wall. They surrendered the second fewest points (90.7) and field goals (33.1) per game at the third-lowest shooting percentage. They didn’t force a ton of turnovers, just brute force and execution.

They typically played eight guys, with spare minutes going to Wallace, Lang, Rick Brunson, or Chris Dudley (the first future gubernatorial candidate to be the NBA’s worst foul shooter). The starting five (Ward, Houston, Sprewell, Johnson, Ewing) was +2.5 on the season and by far their most frequently deployed lineup (Van Gundy was truly Thibodeau’s muse). Perhaps not surprisingly, their best heavy-minute lineups came with Camby or Childs/Thomas on the floor instead of Ewing.

Houston—the team’s lone All-Star representative, excluding Van Gundy—posted 19.7 points per game on a 52.5 eFG% but…that’s kind of it. Sprewell (18.6 PPG) was more consistent, and his tenacity on both ends was more impactful.

Houston’s hesitancy to embrace his alpha status was a season-long issue, along with exhaustion. As the Knicks lagged down the stretch, Houston (again) got the yips.

In his defense, as their relative post–All Star break struggles (21-14) may have exemplified, playing for this coaching staff seemed exhausting. Neither Sprewell nor Houston missed a game while both ranking top three in minutes per game.

In other words: this group needed some load management. “Episodes of lethargy have plagued the Knicks too often…a malady that could ultimately cost them home-court advantage,” the Post foreboded.

“The problem isn’t the burnout and fatigue over time; it’s fatigue within a game,” Van Gundy said, troublingly.

Plus, the speculation over Ewing was incessant. His previous playoff shortcomings, embroilment in the Gold Club scandal and the looming contract talks heightened the scrutiny on the center who celebrated his 1,000 game in orange and blue during that season.

Yet, Ewing played admirably in his third banana role after returning from the Achilles injury in December. He was money from midrange as he sweated all over the damn place, averaging 15.0 points and 9.7 rebounds. Plus, he was often their go-to guy in crunch time (it definitely wasn’t Houston). He could even turn back the clock on occasion, like an April back-to-back in which he went for 30 then 28 and 18.

Still, all the “season did was make Knicks fans nervous about…whether they can play with Ewing in the playoffs as effectively as they did last year without him,” the Post wrote.

If the ’99 playoff run was more exciting, the 2000 version was gutsier.

In the first round, the Knicks swept a dangerous 47-win Toronto Raptors squad, featuring Carter, budding Tracy McGrady, and vets like Muggsy Bogues, Dell Curry, Antonio Davis, and a well-motivated Charles Oakley. Toronto had blown out the Knicks twice that year, and Carter had torched Sprewell for 32.6 points per game. Van Gundy even called Toronto ”the greatest first-round challenge we’ve had” in his Knicks tenure.

The Knicks stifled Carter (3-of-20 from the field) in Game 1, then they rallied from 15 down to win Game 2 on a Sprewell jumper. (Houston had zero field goals in those two fourth quarters). In the close-out game, Johnson sparked a 14-point comeback, banked a dagger three, and threw up the “LJ.”

Next, they met the Miami Heat (52-30) for the fourth consecutive playoffs—one year after Houston started Pat Riley’s summer at the buzzer. Characteristically, this dogfight was as knock-down, drag-out as a second-round matchup could be.

Sprewell (6-for-25 from the floor) and Houston struggled in the first two games. Houston committed three turnovers at the end of Game 1, then shot 3-for-14 in Game 2. But, the Knicks’ defense held firm, pulling out an 82-76 win (aided by Miami free throw woes).

In Game 3, Ewing sent MSG into bedlam with a jumper with 2.6 seconds left to tie it up—then missed the key free throw in overtime. Anthony Carter made his infamous over-the-backboard floater to deliver the Knicks an “H” and give Miami a 77-76 win.

“They won’t remember that Ewing put them in position again last night…Because then people would have to find another target and…he’s been here the longest, so let’s point the finger at Patrick…Somehow, he’s become the symbol of being so close yet so far away,” wrote the Times.

Game 4 was Ward’s finest non-Heisman sports moment: scoring the final nine points in a 91-83 Knicks win. After Miami was all-around better in Game 5—and after a jet blast totaled Van Gundy’s car—the Knicks crawled back from an 18-point deficit to win Game 6, 72-70 (just what the NBA rules committee had in mind). The 37-year-old Ewing played 42 minutes and delivered a jumper, put-back slam, and steal in the final 3:30.

As noted earlier, they could have used home-court advantage for their Conference Finals rematch with the 56-win Indiana Pacers. The Knicks had gone 33-8 at the Garden and 17-24 away, while Indiana—boasting the league’s best Offensive Rating and on a mission to avenge Johnson’s four-point play and get Reggie Miller to his first Finals—went 36-5 at the Conseco Fieldhouse.

The Knicks were tired from the quick turnaround and caught off-guard by the sharpshooting, pass-heavy Pacers—who led the league in free throw and three-point percentage. Indiana drained 10-for-15 from downtown and rolled in Game 1. The Knicks got bullied on the boards in Game 2, and Ewing sprained his knee.

The Knicks weren’t always hyper-focused throughout the season, but, as Van Gundy noted, ”when things are inflicted upon us…we have great resiliency.”

In Game 3, despite missing Ewing and losing Camby in the first half, the Knicks narrowly prevailed, thanks to 60 combined points from Sprewell and Houston. In Game 4, the banged-up ‘Bockers started Dudley and squeezed out a two-point win. Johnson stepped up for 27 points in Game 4, hitting 5-for-5 from three. (In the series, the Knicks made 30-of-70 threes, but Indy took 56 more.)

“The Knicks need adversity to breathe,” wrote the Times. “Handling prosperity is not the Knicks’ best quality. They are better when they have to defy logic, gravity and dire circumstances.”

They often needed Ewing, too, but were faster and more versatile without him—evidenced by their 5-1 record and increased points per game versus Indiana sans Ewing in the ’99 and ’00 postseasons.

In Game 5, the tank finally hit empty. Indiana erased a Knicks’ 18-point lead and won 88-79. By Game 6, Ewing had foot tendinitis, Sprewell had a fractured toe, Camby had a sprained knee, and Johnson had plantar fasciitis. The Pacers unceremoniously eliminated the Knicks at the Garden, 93-80, as Miller out-dueled Sprewell in the fourth frame (Houston: 10 points in 40 minutes).

Ewing had 18 points and eight rebounds in his final game as a Knick. In the end, he was hardly the one to blame.

Van Gundy knew the window was closing. ”We’re not getting healthier next year. ”That doesn’t mean we’re not capable of playing good basketball down the road, but you never know.

After Grant Hill passed them over, they mostly ran it back again, except for Ewing.

Ewing had one year left at $14 million, and the extension he coveted would have sent the franchise into luxury tax territory. After a foiled first try, Ewing’s agent orchestrated a deal that sent Ewing to Seattle, Dudley and a first-round pick to Phoenix, Wallace to Dallas, and brought Glen Rice, Luc Longley, Travis Knight, Vernon Maxwell, and two first-rounders to New York. (Only Rice, Longley, and Knight played for the Knicks, and the two picks were utilized by other teams.)

Layden extended Houston in 2001, steered the franchise into cap purgatory without future assets, and was replaced by Isiah Thomas in 2003. By the end of the 2004–05, only Kurt Thomas remained in New York. Today, Layden is the general manager of the Minnesota Timberwolves, hired on the same day as Thibodeau—the current front-runner for the Knicks head coaching job. Go figure.

»READ: The Knicks should hire an “unproven” coach

»READ: Revisiting random Knicks seasons of the past: the 1988–89 Bomb Squad

»READ: How Tom Thibodeau would affect the Knicks’ young players