Revisiting Random Knicks Seasons of the Past: the 1988–89 Bomb Squad 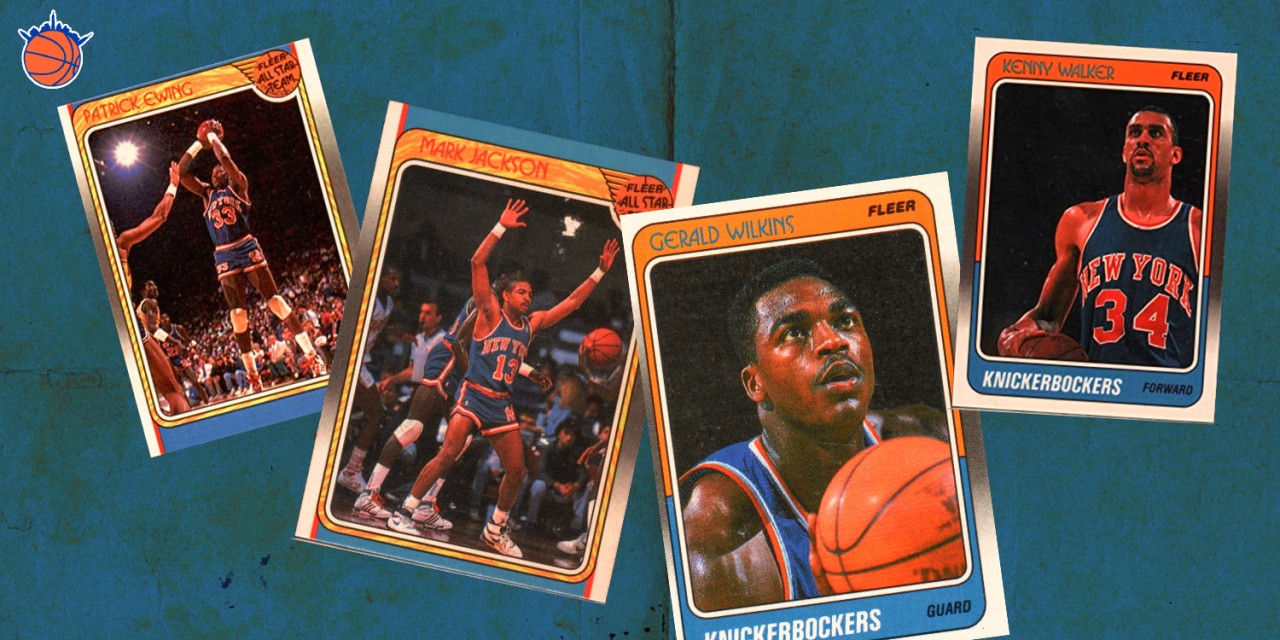 The answer for best League Pass Knicks team? That’d be the Bomb Squad—the three-point-happy ‘Bockers in 1988–89 under Rick Pitino.

In 1988–89, Rick Pitino’s three-point friendly, run-and-gun style energized a young roster and gave Knicks fans their most entertaining season in years—until they ran into Michael Jordan.

Things were looking up. The year prior, the young roster had snuck into the playoffs in the first season under rookie head coach Rick Pitino and general manager Al Bianchi. Though not always aligned, Bianchi’s competent moves constructed a balanced, versatile roster, while Pitino’s intense, pioneering style produced a group of three-point jacking Energizer bunnies.

On draft day 1988, Bianchi added two key pieces. He acquired Charles Oakley from the Chicago Bulls for Bill Cartwright, and selected New York City’s own Rod Strickland with the no. 19 pick.

Pitino raised the stakes for 1989, committing to an ambitious, frenetic style that demanded unprecedented three-point shooting and full-court pressing.

The strategy could only work with a roster as young as the Knicks. Their oldest player on opening day was 28 (Trent Tucker, until a trade for Kiki VanDeWeghe). It also required an athletic group of perimeter players, including strong point-guard play, which the Knicks had as well, surprisingly, considering this side of the millennium’s point guards.

Pitino ordered everybody to shoot. “I knew things were going to be crazy when Coach Pitino came up to me the first day and said, ‘You’re going to be a three-point shooter,’” Strickland recalled.

“I had two clauses in my contract,” Pitino explained. “I had a wins clause and I had an attendance clause. I had to fill The Garden. And the best way to do that was to play an entertaining style that would produce wins. That’s exactly what the three-point shot brought to the game.”

The group of Mark Jackson, Strickland, Tucker, Gerald Wilkins, Johnny Newman—thanks to an iconic poster—would be immortalized as “The Bomb Squad.”

The “Bombinos” launched 1,147 threes in 1988–89, over 400 more than the next team. They drained 386, shattering the previous single-season mark (271). They took 14 per game, and made 4.7 made per game—both leading the league. They averaged 116.8 points per game while remaining efficient: finishing fourth in True Shooting percentage and third in effective field goal percentage (eFG%).

High-scoring, fast-paced basketball was a staple of the 1980’s, but Pitino was amongst the first coaches to utilize the three-pointer as a weapon.

“Rick told me, ‘I will never take you out of the game for shooting, but if you don’t take the next shot that Mark Jackson passes you…you will be sitting beside me,’” said Tucker, who sunk a career-high 118 triples that season.

Jackson’s fast-break prowess was buoyed by Oakley’s outlet passing. (Having two legendary NYC point guards running the show was one of the many cool things about this team.) And if things didn’t materialize right away, they could feed Patrick Ewing. “We dared you to play small. We were going to make the adjustment and he was going to absolutely embarrass you,” Jackson said.

Somehow, they also pressed for 94 feet. “We had to get in good shape,” said Tucker.

Despite the nightly endurance test, this team stayed remarkably healthy. Eight guys played at least 79 games, and 10 made over 70 appearances.

This team had youth, versatility, and cohesion. “This team had a really, really good camaraderie. We hung out together, we had fun together,” Strickland recalled.

“Some teams were truly baffled by what we were doing…there was a feeling around the league that we would revert to more conventional play. Just the opposite because now we were confident … We were a dangerous animal,” said Jackson.

They also possessed a distinct ability to incite chaos. The Knicks turned the ball over a lot but created the second-most turnovers and the second-most steals per game. They immediately in-bounded opponents’ made baskets and took off running.

The Bomb Squad would’ve been the ultimate League Pass team, and it rubbed off on the fanbase. “They embraced us. It was a contagious feeling. Not just in the stands, but it took over on the floor also.” Jackson said. The Knicks rolled to a 35-6 record at the Garden.

Even on the road, the excitement these Knicks drummed up is palpable. Footage from a January matchup in Portland—a 118-116 Knicks win—has gameplay showing a fast, loose, and weird matchup, delighting the fans and announcers alike. The Blazers join the track meet, too, as Clyde Drexler glided to 48 points on a bevy of transition dunks and slick moves.

Nearly everybody statistically benefited from the high shot rate (92.8 field goal attempts per game). Oakley set a career-high in rebounds per 36 minutes (13.6). Newman tied a career-high in points per 36 (19.9) and contributed (by far) the most Win Shares of his 16-year career (6.7). Strickland made the All-Rookie Second Team. Tucker hit 118 threes—easily a career-best. Jackson posted the highest usage rate (21.3%) and points per game (16.9) of his career and made his only All-Star Game.

Ewing took advantage of the increased spacing and constant mismatches, putting up 22.7 points, 9.3 rebounds, and 3.5(!) blocks per game with a career-best field goal percentage (56.7%).

“We dared you to play small. We were going to make the adjustment and he was going to absolutely embarrass you,” Jackson said.

Another fun thing that happened: Kenny “Sky” Walker won the 1989 Slam Dunk Contest. Walker’s shooting woes limited his role for the Bomb Squad, but he lived up to his nickname with an impressive aerial display in Dallas with an array of double-clutch 360’s and rock-the-baby windmills.

By season’s end, Pitino had satisfied his contract’s stipulations. The Knicks (52-30) finished second in the Eastern Conference and recorded their best single-season attendance since 1975 (and third best in the league).

In the first round, the Bombers swept Charles Barkley’s Philadelphia 76ers in three close games, outscoring Philly by a total of eight points. Gerald Wilkins capped the series with a last-second jumper that has to be amongst the most underrated shots in franchise history (8:10):

In the conference semi-finals, the Knicks gave the Bulls a literal and figurative sweat in a six-game series almost worthy of its own docu-series.

The Knicks never overcame letting Game 1 slip away at home. They controlled the pace and led by 10 with eight minutes left but failed to close out, allowing Jordan to dominate overtime. (If you’re looking for a vintage Jordan watch, try this one. MJ’s clearly excited by the frenetic style and the challenge the press posed. He consistently turns defense into offense, flying around like a disciplined peak-Westbrook. His dishing—out of the press and in transition—is elite.

Bianchi doubted the postseason feasibility of Pitino’s style all along, but it was simply Jordan’s dominance—besides Game 2, when he was held to 15 points—that overpowered the Bombers. He responded for 40 points in Game 3, 47 in Game 4, 38 in Game 5 (Knicks win), then 40 more in Game 6. Jordan averaged 35.7 points, 9.5 rebounds, 8.3 assists, 2.5 steals, and 1.3 blocks per game in the series.

The Knicks nearly forced a Game 7 at the Garden, as the season fittingly came down to two three-point attempts.

With seven seconds to go in Game 6 and the Knicks trailing by four, Tucker improbably hit the second-most clutch four-point play in Knicks history. After two Jordan free throws gave Chicago a 113-111 lead, the Bomb Squad era ended on a missed wide-open three from Newman.

Jackson called the Bomb Squad the “most fun I ever had playing basketball.”

Unfortunately, the good times were over. Days after Game 6, Pitino accepted an offer from the University of Kentucky. “I’m a college basketball coach, and that’s where my heart is,” Pitino said.

“Did he leave because he could not resist taking one of the major coaching jobs in the country?” George Vecsey wrote in the New York Times. “Did he go because he wanted more money? Or did he go because he didn’t feel comfortable working with Al Bianchi? … Forget all the gushy words about having built a system…The Knicks who pressed and trapped and who tossed up three-point bombs with a license from their coach are history now.”

The Knicks promoted Stu Jackson and brought back eight players. They won 45 games and advanced to the second round again, though without the identity of the Bomb Squad. Strickland was traded midseason. They finished sixth in threes made (2.9) and fifth in attempts per game (8.7)

Even if his ambitious style didn’t live on, the 1988–89 team helped recharge the franchise and pave the way for the hard-nosed teams of the 1990’s. More importantly, Pitino believed the Bomb Squad had a broader—but understandable—impact. “Suddenly, kids were taking outside shots in the schoolyards instead of going to the basket…I believed in it because inside of every player is a shooter or a guy that thinks he’s a shooter.”