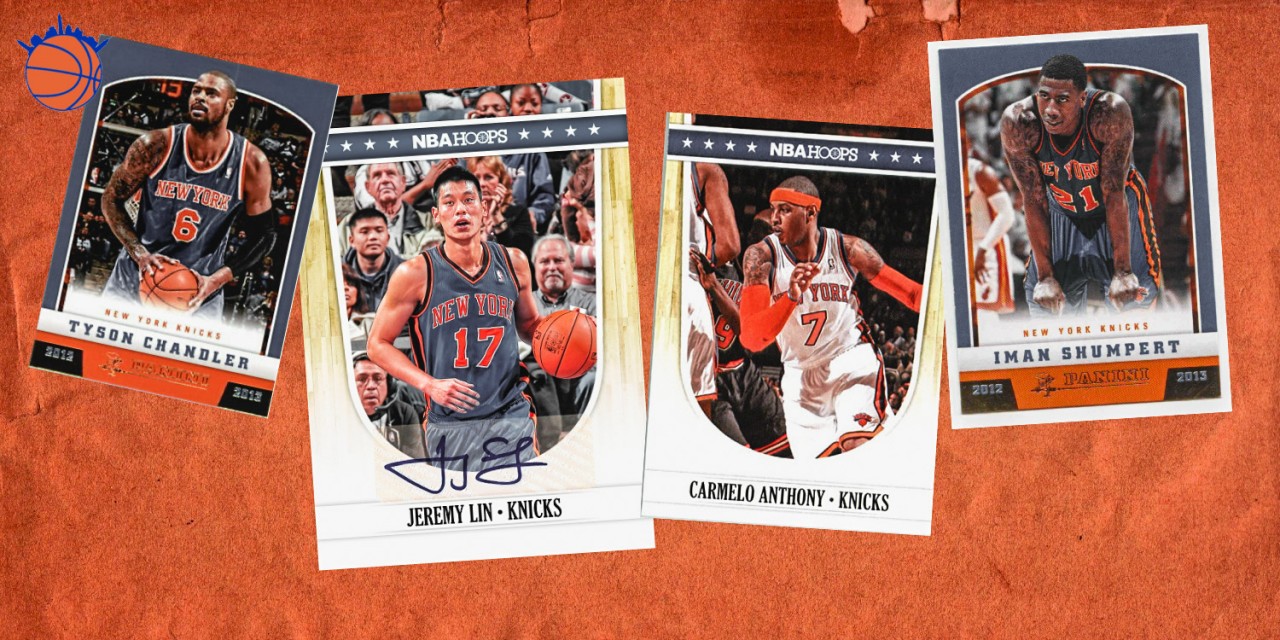 Where to start. The 2011–12 was shortened due to a labor dispute, but when it was on, the Knicks had Carmelo Anthony, Tyson Chandler, and Linsanity.

The 2020–21 NBA season may start on Christmas, so let’s look back on the last time the happened, 2011–12. Despite the abbreviated timeline, that season featured a typical dose of Knicks drama, including Linsanity, Mike D’Antoni vs. Carmelo Anthony, and an unlucky fire extinguisher.

2010–11: The Knicks’ first winning season in a decade ended in a first-round sweep courtesy of the Boston Celtics. A work stoppage loomed, and only a few players were expected to return. Yet, a full(ish) season with Anthony and Amar’e Stoudemire offered hope on the horizon.

The lockout concluded on December 8th, immediately igniting a flurry of league activity within a hyper-condensed offseason, forcing the Knicks to impetuously whip up a roster.

Controversially, the franchise used its one-time amnesty provision on Chauncey Billups. At 35, Billups was still an effective player (16.8 points per game in 2009–10) whom the Knicks intended on keeping, having exercised his $14.2 million option following the 2011 season.

The Knicks pounced, working a sign-and-trade with Dallas and the Washington Wizards. As a casualty, Billups’ contract had to be cleared. On December 10th, they waived Mr. Big Shot, inked Chandler for four years, $58 million, sent Andy Rautins to Dallas and Ronny Turiaf and a second-round pick to D.C.

“We didn’t want to get rid of Chauncey…We traded [Billups] basically for the starting center on the NBA championship team,” Grunwald explained.

The Knicks signed 33-year-old Mike Bibby for one year at the minimum. They added Baron Davis—amnestied by Cleveland and months away from suiting up. Bibby, Davis, and Toney Douglas (off a solid rookie season), and some Shumpert was the expected point guard rotation.

“I think the team will look more like an old Celtics team, in the sense of going through Bird a lot, and they had two rangy shooters in the backcourt, [Danny] Ainge and Dennis Johnson,” D’Antoni optimistically envisioned. “Now, ‘Melo will be doing the pick-and-rolls more, and that’s a good thing. ‘Melo’s one of the best passers we have, and he’ll be involved in a lot more running the team.” (Spoiler: this did not happen.)

The Billups amnesty has not aged well. The organization probably should have waived Stoudemire, though that’s an easier trigger to pull whilst blogging in 2020. Stoudemire was 29, one year into a splashy $100 million deal, with limited reps alongside Anthony. In retrospect, the most prudent route may have been for Walsh to simply buy out Billups the previous February and pocket the amnesty.

Finally, Grunwald added two journeymen in late December: Steve Novak and Jeremy Lin (assigned to the Erie BayHawks). “Just how long the Knicks plan to keep Lin is unclear,” wrote Marc Stein. “His contract is not guaranteed, so the Knicks can waive him at any time prior to February 10th without having to pay the remainder of his contract. If and when Shumpert returns from his injury, he will likely resume his role as one of the team’s three point guards, leaving Lin as the odd man out.”

Landry Fields was back after an encouraging rookie year, and Jared Jeffries was still around to back up Chandler.

Overall, the combination of impetuous roster construction, inconsistent conditioning across the board (cough, ‘Melo) and a dense schedule—they played 18 back-to-backs and one back-to-back-to-back—gave 2011–12 all the makings of a stranger-than-usual campaign.

The holiday cheer was gone, though, as the Knicks dropped four of five, then 11 of 13 in January.

On February 4th, with Anthony nursing a bad groin, Stoudemire out for personal reasons, and the point guards underperforming (shocking), the Knicks promoted Lin—who promptly dropped 25 points and seven assists on the New Jersey Nets.

The Knicks won seven in a row and eight of nine. Lin lit up Kobe Bryant and the Los Angeles Lakers for 38 points on national TV, followed by the cold-blooded game-winning three in Toronto. Lin averaged 23.9 points and 9.2 assists over 11 games, of which Anthony missed seven of those games—all wins.

Lin graced the covers of TIME and Sports Illustrated. He settled a long-running dispute between Time Warner Cable and MSG. The team got back to .500 by the end of February, and Lin was named Eastern Conference Player of the Month.

On February 17th, the Knicks signed J.R. Smith, who had recently scored 60 points with the Zhejiang Golden Bulls. Smith was unsteady for 35 games (12.5 points), though he would pay dividends in 2012–13. Memorably, he was fined $25,000 for a NSFW tweet he admitted was not “the smartest move.”

Anthony returned on February 20th, and the Knicks lost eight of 10. At D’Antoni’s chagrin, Anthony reverted to ball-stopping isolations, throwing off the pick-and-roll groove established by Lin and Chandler.

After some locker room beefing, D’Antoni brought the Knicks a “Carmelo or Me” ultimatum. On March 13th, D’Antoni “just went in and quit.” The team was 18-24.

Mike Woodson, who had been hired by his college teammate Grunwald in August to run the D, was named interim head coach. The Knicks instantly perked up, routing the Portland Trail Blazers 121-79 in his debut (Portland fired Nate McMillan the next day).

Woodson’s focus was on defense, which gave Anthony more offensive agency. He was galvanized, highlighted by his performance on Easter: a 100-99 win over the 43-13 Chicago Bulls. It was Anthony’s signature performance in New York: 43 points (16-of-31 from the field), including two identical pull-up triples—the OT-forcer then the OT dagger.

Anthony averaged 29.8 points, 7.3 rebounds (49.5% from the floor, 46% from deep) in March on his way to Player of the Month honors. Still, he didn’t exactly ingratiate himself to Knicks fans during that year. He posted just 22.6 points (43% from the field) and 6.3 rebounds per game in 55 contests, his conditioning was suspect, and he was a constant distraction.

Stoudemire dealt with nagging injuries and personal tragedy, preventing him from establishing chemistry with Anthony and Chandler. In 47 appearances, his points per game (17.5) dropped off precipitously from the year before (25.3), and he looked alarmingly washed.

Chandler was a bright spot. He won Defensive Player of the Year, topped the NBA in field goal percentage (68%), and made third-team All-NBA. His 9.5 Win Shares easily led the team (Anthony contributed 6.2).

Like Rick Pitino’s Bomb Squad, these Knicks shot a lot of threes and generated frenetic action on both ends.

As was customary during D’Antoni’s tenure, the Knicks ranked amongst the league’s best from downtown. They finished fourth in threes made (7.8) and second in attempts (23.3) per game. Steve “Novakane” became led the league in three-point percentage and “Discount Double Checks.”

The Knicks also forced the second-most steals and turnovers per game while committing the second-most turnovers themselves. They played at the league’s fifth-fastest pace (93.2), though noticeably slower under Woodson (90.4).

Similar to the 2003–04 Knicks, you can divvy this team up into multiple iterations: Pre-Linsanity, Linsanity, Pre-Woodson, Post-D’Antoni, etc. However you slice it, the team was better under Woodson—albeit with a smaller sample size and with more time for the players to get in shape.

The Knicks went 18-6 after the coaching change and finished at 36-30, earning the East’s no. 7 seed and a matchup with the eventual-champion Miami Heat. The Knicks had lost all three Heatles matchups that year—notably LeBron James and Dwyane Wade’s tag-team bullying that punctured the Linsanity balloon.

The Miami series went almost as poorly as possible for the Knicks­. In Game 1, a flu-ridden Chandler was nearly ejected, Shumpert tore his ACL, and the Knicks got trampled, 100-67.

After a 10-point Game 2 defeat, Stoudemire released his frustration on an unsuspecting American Airlines Arena fire extinguisher, costing him Game 3. The Knicks lost by 17, though J.R. Smith made his only valuable contribution of the series:

The Knicks eked out Game 4 at the Garden, 89-87, snapping the franchise’s record 13-game(!) playoff losing streak. Anthony tallied 41 points, and Stoudemire did his best to redeem himself with a proud 20 points and 10 boards. Miami closed it out in five, 106-94.

Due to the unique circumstances surrounding this season, it’s difficult draw any sweeping conclusions about what worked and what didn’t, which presumably posed a challenge for the front office after the season.

Grunwald retained his pal Woodson then signed Smith for two years, $2.8 million. James Dolan passed on matching the Houston Rockets’ “poison pill” offer for Lin—capping his Knicks career at 35 games and depriving the franchise of a solid young point guard.

To fill the void left by Lin, Bibby, and Davis (who dislocated his kneecap in Game 4), the Knicks…went older. They signed Jason Kidd, 39, and Pablo Prigioni, 35, and, eventually, 38-year-old Rasheed Wallace just for kicks. They also dealt Jordan, Douglas, and Harrellson to Houston to bring back 38-year-old Marcus Camby.

It’s still unclear what the upcoming offseason period and regular season schedule will look like, and any delay won’t be lockout-related, of course. However, Leon Rose and the new front office is facing a crucial year of personnel evaluations, and they’ll attempt to similarly navigate unconventional scenarios that lay ahead without disrupting long-term progress.