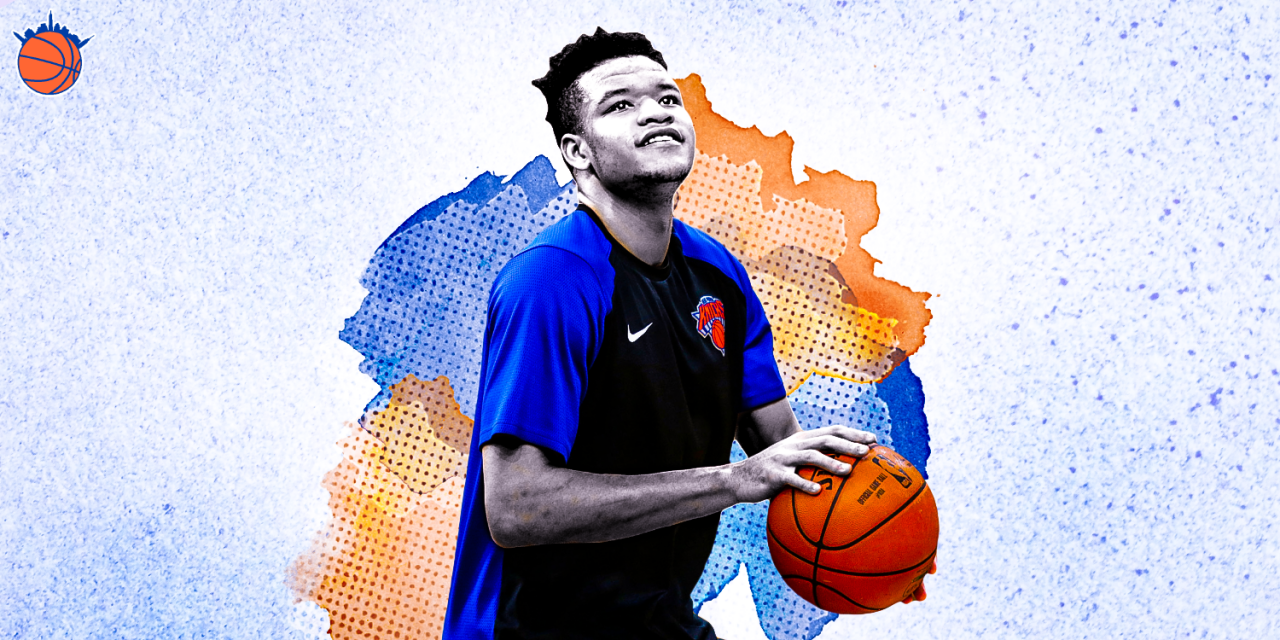 More than 30 games into the season, Kevin Knox is beginning to evolve his game with a newfound confidence that could bring the rookie to new heights.

It could have been the high expectations from Summer League, the early ankle injury, or both, but Kevin Knox had an underwhelming start to his rookie year. In his first consistent stretch of action, with 11 games in November, he scored just over seven points a game on 31 percent shooting from the field—not good.

But he’s come out in December looking much more comfortable from every area of the floor.

It started with a 26-point showing at home against a hot Milwaukee team on December 1st. Knox went 9-of-20 from the field in a big win, marking his first NBA game with more than five field goals made. Perhaps he needed to see that he was capable of majorly impacting an NBA game to give him the confidence needed to keep doing it.

Since then, Knox has seen game action move a little slower and made quicker reads. In the last five games, he’s averaged 19.4 points on 41.9 percent from the field and 41.6 percent from downtown (pulling him up to 37 percent from three on the season, per Cleaning the Glass). In fact, four of those games marked a nifty milestone for the neophyte. Per Tommy Beer, Knox is the first rookie in Knicks history to score at least 15 points and knock down three three-pointers in four straight games.

In every one of these games, he’s flashed new moves, counters, and a patience to let the game come to him instead of forcing the action. This has become especially apparent from his catches behind the arc.

Earlier this season, Knox waited until he had both the ball and his feet set to read what was coming at him. Now, he’s reading defenses early before the ball touches his hands. Against the Suns, he recognized the drop coverage before he makes the catch, leaving him an easy step-back into open space. If he had waited for possession of the ball to make that read, he would have needed to take an extra step and the defender would have recovered in time.

Knox comes around a screen in motion in that clip, but he’s also been a step ahead of the defense, making quick decisions when he catches the ball from a stationary position. Here, against the Pacers, he recognizes the open teammate to the left and clears space for his shot with a decisive, immediate ball fake.

The ball fake from Knox even made me look the other way pic.twitter.com/HJvx9JTMPI

The immediacy off the catch is key here. It’s allowed him to create space for his shots from deep. And when he decides to shoot immediately off the catch, he’s loading before he gets the ball to get off a quick release.

Decisive motions help Knox create room, but he’s also shown an ability to balance it with a patience that gives him the extra step to open other areas of the court. He’s comfortable driving to the lane and finishing with his nice in-between game. Here, Knox makes the catch, reads that Bogdanovic is leaning forward, and waits until he starts that first step out to him before driving. He loves this floater.

In addition to the in-between game, Knox has been flexing his length to get shots off in the paint. Here, he abuses Sabonis from the triple threat position, and when help defense doesn’t come, shows nice dexterity to get the ball just beyond the (legal) reach of the bigger defender.

Knox gets the goaltend for his 3rd FG pic.twitter.com/qzuse86ffg

This is a favorite move of his when he’s driving to the cup. Knox has the length to wrap the ball beyond defenders’ arms. When he’s got the step on the bigger guy like Sabonis, Knox uses his long strides all the way. When he’s in transition coming at someone, he takes shorter, choppier steps, while loading up and protecting the ball outwards before taking that one long stride to extend the ball to the glass.

These skills can become lethal as he starts to discover little advantages and new ways to use the threat of that floater to force bigs up so he can get an extra step into a wrap-around. He’s still figuring out the small eccentricities of maneuvering around the rim, but he’s getting to his spots.

There’s still plenty that he has to work on. If the ball doesn’t touch his hands for a few possessions, or if he turns the ball over, Knox can get discouraged and disengaged. The Knicks are dead last in assists, per NBA Stats, suggesting an iso-heavy offense, so there are stretches of game in which he’s very quiet.

Watch after he turns the ball over here, gingerly jogging back on defense, probably upset at himself. Courtney Lee slows T.J. Warren down in the open court, probably just enough so that if Knox was hustling back, he could have affected the shot from behind. The broadcast even picks up Lee yelling “Yo Kev! Where you at?”

Progression takes time, and it’s very encouraging to see the strides he’s made on the offensive end. Knox has been getting to his spots, not just around the rim, but all over the floor. That’s where his confidence is really showing, as he discovers that balance of decisiveness and patience getting to those spots. He still needs to hit from each area of the floor more efficiently. He’s proven able to do that only in the last handful of games, so we’ll need to see longer stretches.

But it’s clear that Knox is playing with a swagger now that’s been missing since Summer League.