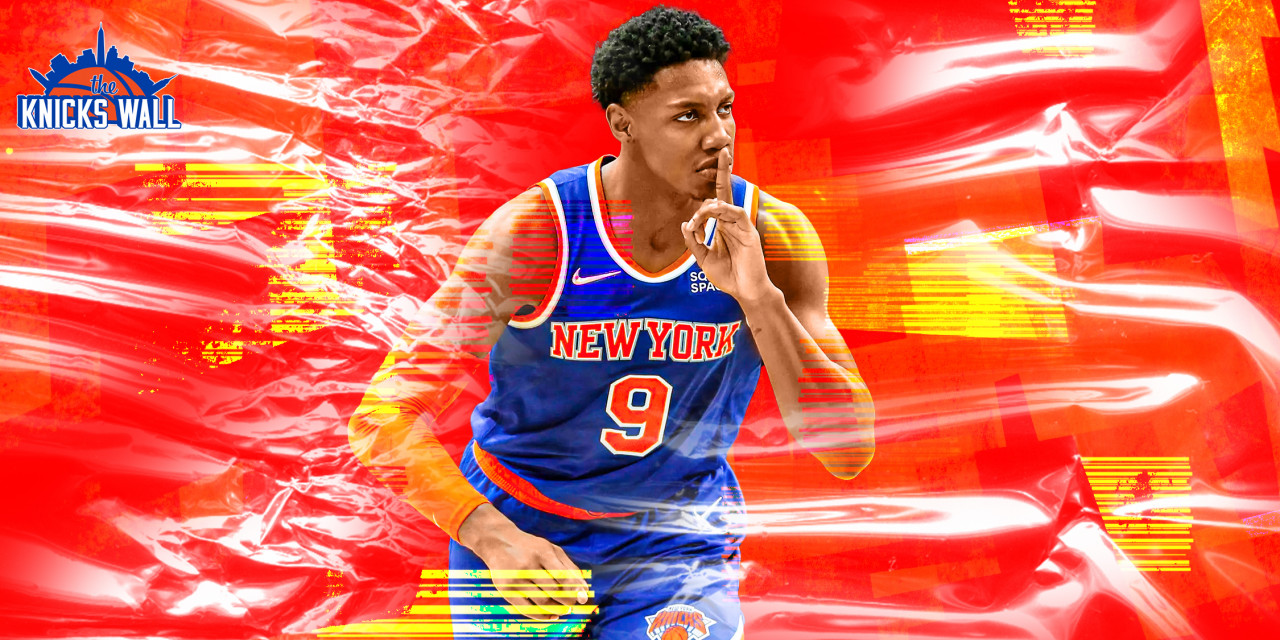 RJ Barrett has found his groove after a cold start. In his last few games, he has shown he can uplift the Knicks on both sides of the ball.

RJ Barrett heard the noise and he listened to your concerns. When asked about his slow start, Barrett did not have a definitive answer as to why, but he was adamant about working through his struggles. After an impressive slew of recent performances, RJ has quelled the talks of slow starts and now is firing on all cylinders.

The New York Knicks’ roster is full of dynamic scorers and Barrett cannot afford to get lost in the shuffle. He got off to a quick start in the first game of the season against the Celtics, having a great all-around game, highlighted by metaphorically putting Jayson Tatum in jail, helping to hold him to 7-of-30 shooting on the night. Barrett did make it a point to work on his defense in the offseason, and the early results have been positive. After that game, he cooled for a bit on the offensive side of the ball, and the slow start talks began.

Going into his third season Barrett has high expectations and can solidify himself as the second option opposite newly crowned All-Star Julius Randle. He must play to his strength and assert himself with the ball in his hands. With the addition of volume shooters, Barrett has two new teammates in the starting lineup he must become acclimated with. Having Randle, Kemba Walker, and Evan Fournier, there will be some nights when the touches won’t be there for him. This shouldn’t be any cause for concern just yet because the third-year Duke product has the intangibles to score at all three levels.

Early this season Barrett has been dependent on the three-ball, they haven’t been falling as frequently as he would like, but history has shown his three-point shooting is bound to improve. Between his first and second seasons, his three-point shooting percentage jumped 8.3% from 32% to 40.3%, this season Barrett is up to 42.9% after his recent hot streak.

Seeing more threes attempted by Barrett early on is no coincidence. The Knicks emphasized shooting more three-pointers this season. The uptick in three-point shooting is teamwide, coming from the Knicks’ newfound ability to spread the floor. Barrett is averaging 14 field-goal attempts per game this season thus far, and six of those attempts are coming from behind the arc. Of those attempts, entering Wednesday’s matchup with Indiana, 4.1 of them are catch-and-shoot and he is currently hitting those at a 44.8% clip. The catch-and-shoot numbers might be impressive at a glance, but it might not necessarily be the best thing for RJ Barrett to wait around for shots. He does the most damage with the ball in his hands.

Last season Barrett was able to improve his statistics in virtually all offensive categories. But he cannot solely depend on low percentage, long-range shots when he is slumping, or the team is grinding for points. When scoring is hard to come by, and the game is ugly, the best players figure out ways to slow things down and take control, which usually comes with getting to the hole and the free throw line. RJ always could attack the rim. His issue, however, was finishing. This season Barrett may have corrected that, as he is converting 75% of his shots within five feet of the goal. If Barrett can continue his assault in the paint, he’s bound to get to the charity stripe more often.

This is Barrett’s true strength—his ability to attack the rim and slow the game down. With the Knicks’ ability to shoot the ball from the point guard position this season, the floor opens for Barrett to throw his weight around. Last season, it was easy to see that when Elfrid Payton was the lead guard opposing defenses did not have to worry about him very often, sometimes disregarding him completely. That usually left the Knicks exposed to double teams or a crowded paint, thus little maneuvering on offense. The two-headed monster of Walker and Derrick Rose offers the Knicks different options to break down a defense. Barrett can benefit from a bona fide scoring guard that can give him more chances on one-on-one opportunities to drive and create on isolation plays.

ANOTHER RJ TO MITCH LOB😳 pic.twitter.com/7JUaX4Qgc2

This is the key to opening Barrett’s game, getting him involved early, and letting him go to work in the paint, which can open him up to more chances at the free throw line. In the first seven games of the season, he has only attempted 25 free throws, averaging just 3.6 a game. As a player whose game is suited to drive to the hoop, Barrett has never averaged more than 4.1 free throws a game. On Wednesday, he went to the foul line seven times. If RJ wants that number to increase, he must get used to throwing his weight around to get foul calls and use his physicality to dominate games and when his jumper is not falling.

As Barrett continues to silence the doubters, his recent run of games has provided more than enough evidence showing his increasing potential by playing to his strength. The slow start has quickly turned into a hot streak with a glimpse of a clutch gene.

Beginning with one of his better outings of the season so far versus the Bulls, Barrett cut down the threes and focused on driving to the rim. Of his 15 shot attempts that game, only four were outside the paint, where he converted an efficient seven of 11 shots.

Barrett continued to build on that by taking the Pelicans to task in a spectacular game setting a new career-high of 35 points. He showed off a wide array of offensive skills by dominating the ball most of the game. In a night where the touches were there, RJ put the ball on the floor, created for teammates, and dominated the paint. His confidence continues to grow on the offensive side, as he shot an impressive 6-for-8 from behind the three-point line. He was also able to get to the free throw line more.

Even in a disappointing loss, Barrett stayed hot against Toronto. He hit five more threes, continued to attack the paint and, got to the line seven times. Barrett’s production evolves from game to game. If the Knicks want to sustain their success, he must remain engaged on offense. His development is crucial to the franchise moving forward.

In their first back-to-back loses, in a game in which they never had a lead, against Indiana, Barrett continued his masterclass. RJ got it going in the third quarter, scoring 12 of his 23 points on the night.

With the pressure to perform under the bright lights of MSG and all the criticism, it is easy to forget that RJ Barrett is only 21 years old. He is in the infancy stages of his NBA career and still maturing as a person and player. His work ethic is undeniable, attested by folks in and around the Knicks, that, combined with his ability not to dwell on bad games is a recipe for success that is beginning to show.