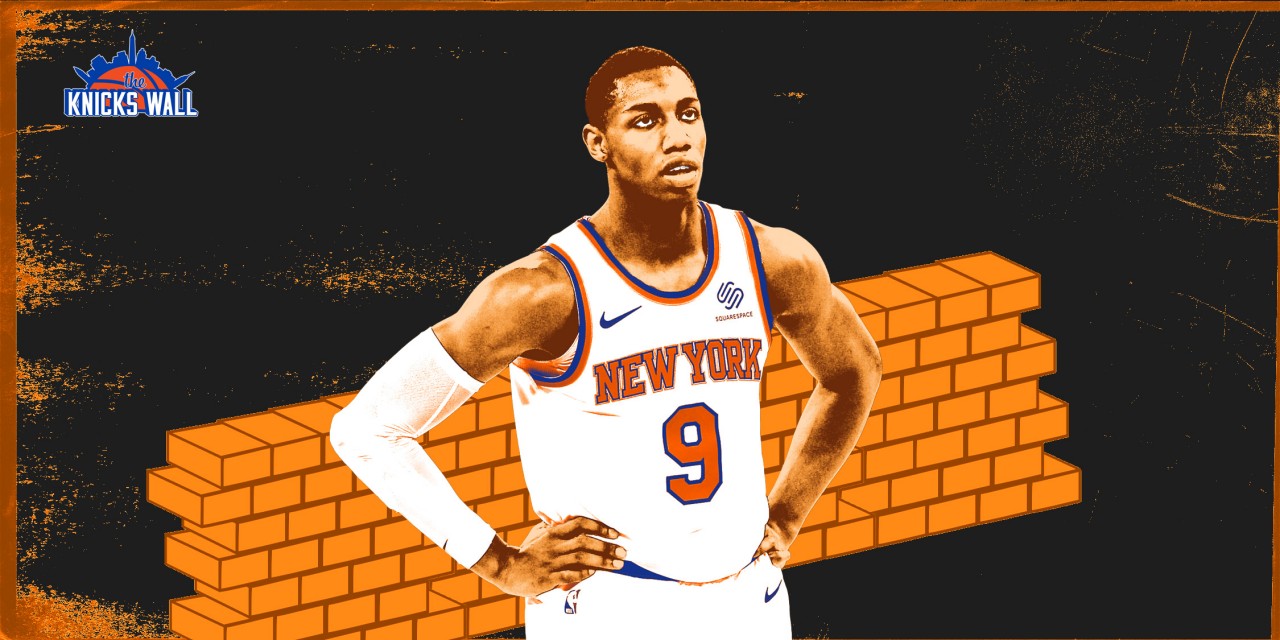 The Knicks finally have an identity thanks to Tom Thibodeau, and their young franchise player, RJ Barrett, is thriving in this defensively focused system.

In his second pro season, R.J. Barrett has made commendable, noticeable strides in every aspect of his game. After a slow start from deep, he’s raised his three-point percentage to 38.3%. He’s averaging 2.9 assists per game despite ranking fourth in usage rate on his own team (behind Julius Randle, Immanuel Quickley, and Derrick Rose), per NBA.com, and perhaps most promisingly—at 20 years old—Barrett is showing all the signs of becoming an elite defensive stopper.

Listed at 6-foot-6 and 214 pounds, Barrett looks the part of an elite defender already and he’s only going to fill out his frame more. His 6-foot-10 wingspan has also likely grown since last measured during the draft process, meaning that defending taller players shouldn’t pose an issue.

As Barrett fully grows into his body he’ll have the frame to guard positions one through three, as well as some smaller power forwards. Hell, as strong as he is, he should be able to hold his own in the post when switched onto centers. The 20-year-old is already a solid ball of muscle, so even the biggest centers are going to have trouble moving Barrett an inch in a few seasons.

However, what good is potential that never comes to fruition? Barrett struggled throughout a listless rookie season, on a team helmed by David Fizdale and Mike Miller, and slander followed. While even (most of) his harshest critics admit they overreacted to a rocky first year from an at-the-time 19-year-old in an absolutely awful situation, questions remained.

Enter Tom Thibodeau. After a disappointing tenure as head coach and president of basketball operations with the Timberwolves, Thibs returned to Madison Square Garden, where he spent seven years as an assistant under Jeff Van Gundy and Don Chaney.

The team improved instantly under the new coaching staff. You can complain about his rotations and worry that Randle and Barrett play too many minutes, but Thibodeau’s Knicks look like a different franchise from the previous few seasons. Unsurprisingly, it’s a defensive resurgence spurring the rejuvenated Knicks.

Per NBA Stats, the Knicks hold opponents to 104.5 points per game, the fewest in the league. Pace plays a role in that—the Knicks have the fewest possessions per game—but the team still ranks third in Defensive Rating at 107.5, and behind only the Sixers (106.6) and the Lakers (105.8).

New York hasn’t had an above-average defense since Tyson Chandler won Defensive Player of the Year in 2012, and there have been more than a few seasons in which the Knicks finished bottom-five in Defensive Rating since then.

Thibodeau has provided the team with the schemes, the framework, and added motivation, but he’s not on the floor. He needs the players to execute, and they have.

For example, according to Basketball-Reference, Nerlens Noel is second in the league in defensive box plus/minus at 3.3 and leading in Defensive Rating at 101. Cleaning the Glass has him in the 97th and 94th percentiles in block and steal percentages for centers, respectively. The stats say that Noel is blocking 4.8% of opponents’ shot attempts and steals the ball on 2.1% of opponents’ plays.

Those numbers pop, but not all defense can be so easily quantified. The eye test says that Barrett has the makings of a great defender. He gets caught ball watching occasionally, but he’s 20 and he rarely looks overmatched in an on-ball defensive matchup. However, the counting stats aren’t there, Barrett is averaging 0.8 steals and 0.3 blocks per game. Amongst fellow wings, Barrett ranks in the 34th and 19th percentile for blocks and steals, respectively.

Barrett’s defensive impact shows up elsewhere. Even when he’s disrupting possessions, he may not receive credit for the steal.

When Barrett’s on the floor, the Knicks’ opponents have an effective field goal percentage (which accounts for threes) of 51.3%, which, according to Cleaning the Glass, places Barrett in the 93rd percentile for wings.

The Knicks’ ability to defend the three-point line has been crucial to their defense this year. New York allows the 12th most three-point attempts (35.4 per game), but opponents are only making 33.4%, the best mark in the league.

The regression to the mean that analysts warned fans about never occurred and Barrett appears to be a part of the reason why. Per Cleaning the Glass, opponents are shooting 33.4% from deep with Barrett on the floor, 0.9% lower than when he’s off, and that impact grows when looking only at threes above the break—opponents are hitting just 32.4% of them with Barrett on the floor, and that percentage rises to 34.3% when he’s on the bench.

Teams do shoot more threes with Barrett on the floor—38.8% of opponents’ shots are threes when he’s in the game versus 37.0% when he’s sitting. However, the vast majority come from above the break. Not only are teams shooting worse from three with Barrett in the game, but they’re also shooting more tough threes and fewer shorter corner threes.

The classic counting stats just don’t show Barrett’s defensive impact, and while more advanced analytics help paint a picture, seeing is believing. Even when he does get scored on, R.J. is almost always in a good position to defend, sometimes guys just make shots.

Luka Doncic wasn’t Barrett’s primary assignment last Friday, but his effort was obvious on plays like this.

Doncic bricked his other two attempts when Barrett was switched onto him—both above-the-break step-back threes—and he coughed up the ball once when Barrett came over to help on a drive late in the fourth.

The effort that Barrett shows on the defensive side of the floor is what should excite Knicks fans the most. Barrett already has the frame and the coach to become an elite defender—he’s just going to take work to get there. In the first clip, he calls for Noel to switch with him so he can guard Doncic. Barrett then defends Doncic about as well as anyone could.

By all accounts, Barrett has the exact attitude you hope for when drafting a player third overall. “His work ethic is top of the line, his attitude and approach are top of the line,” said Thibs of R.J. Barrett following their win against Memphis last week, per SNY’s Ian Begley. “He’s a team-first guy. He’s 20 years old and he’s only going to get better.”


From earlier: Tom Thibodeau on RJ Barrett: “His work ethic is top of the line, his attitude and approach are top of the line. He's a team-first guy. He’s 20 years old and he's only going to get better.” More: https://t.co/rLqM3Gowp4

The most promising part of that quote is that it’s in reference to Barrett’s improved shooting and clutch play late in games, but it applies to his entire game. The Knicks have a two-way star blossoming before their eyes, and no matter where Barrett’s ceiling ends up you can be certain that he and Thibodeau will make sure he reaches it.