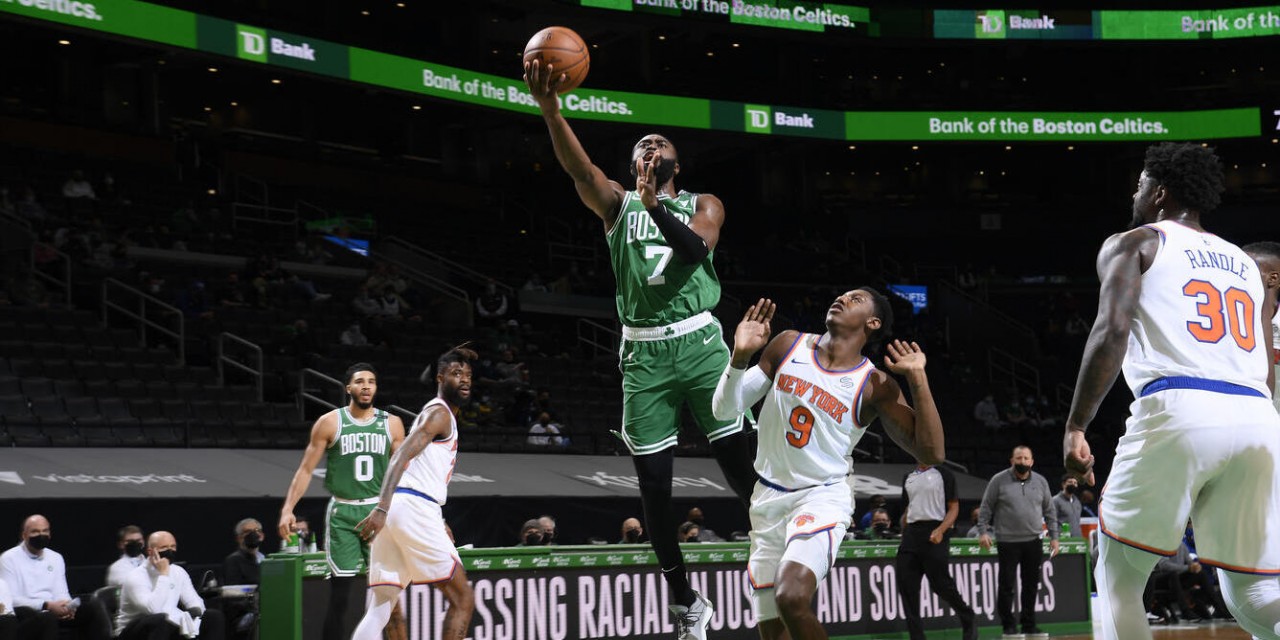 Knicks sophomore wing RJ Barrett was a perfect 6-of-6 from downtown, but New York once again fell short late, this time to the Celtics.

The New York Knicks (25-27) fell to the Boston Celtics (26-26) by a final score of 101-99 in a compelling down-to-the-wire matchup. Jaylen Brown spearheaded the Celtics with 32 points and 11 rebounds on the evening. Jayson Tatum beautifully complemented his partner in crime with 23 points on 10-for-21 accuracy from the field. Conversely, R..J Barrett and Julius Randle shouldered the scoring load for New York, combining for 51 points. The Knicks have now lost four consecutive games.

Offensive rebounding was an issue in the early going

New York dearly missed Mitchell Robinson’s presence on the glass. The third-year center is among the NBA’s top board-snatchers and has historically dominated Boston inside. The Celtics grabbed 13 of their misses in the first half alone, compared to the Knicks’ measly two. An unlikely hero, sophomore swingman Romeo Langford, created four second-chance opportunities for the C’s as he chased down misses. Tristan Thompson, a veteran (in)famous for his rebounding chops, bullied New York’s bigs in his first game back in a fortnight with health and safety protocols.

TT getting it done on the glass 💪 pic.twitter.com/00hxHuid2J

The Knicks got outhustled in this aspect of the game, plain and simple. Credit to the opponent, they pursued the glass with great purpose and tenacity. Taj Gibson and Nerlens Noel weren’t able to consistently keep the Celtics off the boards during the first 24 minutes of play. As a result, Boston parlayed their extra possessions into second-chance points, primarily threes off side-to-side ball movement. New York could have grabbed some breathing room on the scoreboard if only they kept the additional chances for Boston at a minimum.

Robinson’s return would nip such an issue in the bud, but the third-year center is not expected to return this season barring a postseason run by New York.

The Canadian was in a groove offensively. Admittedly, Barrett had stretches throughout the game where he seemingly disappeared, as most youngsters do. Still, he also had periods where he scored in bunches and buoyed the Knicks offense during points of stagnation and lifelessness. He oozed confidence in his three-point jumper, connecting on all five of his triples. Considering Barrett’s early-season hardships behind the line, this news should come as music to the ears of Knicks faithful. Let’s not forget the sophomore was nailing his treys at an 18.5% clip back in January. Now? He’s up to 35.9% on 3.5 attempts nightly, per NBA Stats. Talk about improvement.

There was a point when Barrett exuded little trust in his perimeter shot, particularly outside the arc. Those instances are mainly in the rearview mirror.

Barrett is an ascending, soon-to-be star talent. If he can hone his three-ball, future All-Star appearances are in the cards for this kid. They probably are already. Barrett had his second consecutive standout performance after dropping 22 points in a back-breaking loss to the Brooklyn Nets on Monday. He’s showing out against the league’s brightest stars and further staking his claim as one of the linchpins of New York’s offensive attack along with Julius Randle. Scoring 29 points on just 14 shots is no simple endeavor—credit to the poise of Barrett, who had to face off against the likes of Jaylen Brown and Marcus Smart. It’s been a joy to witness the Duke product’s evolution as a scoring weapon, which has made for one of the most encouraging storylines from a season full of positives for New York.

The Knicks return home for a Friday night matchup with the Memphis Grizzlies.