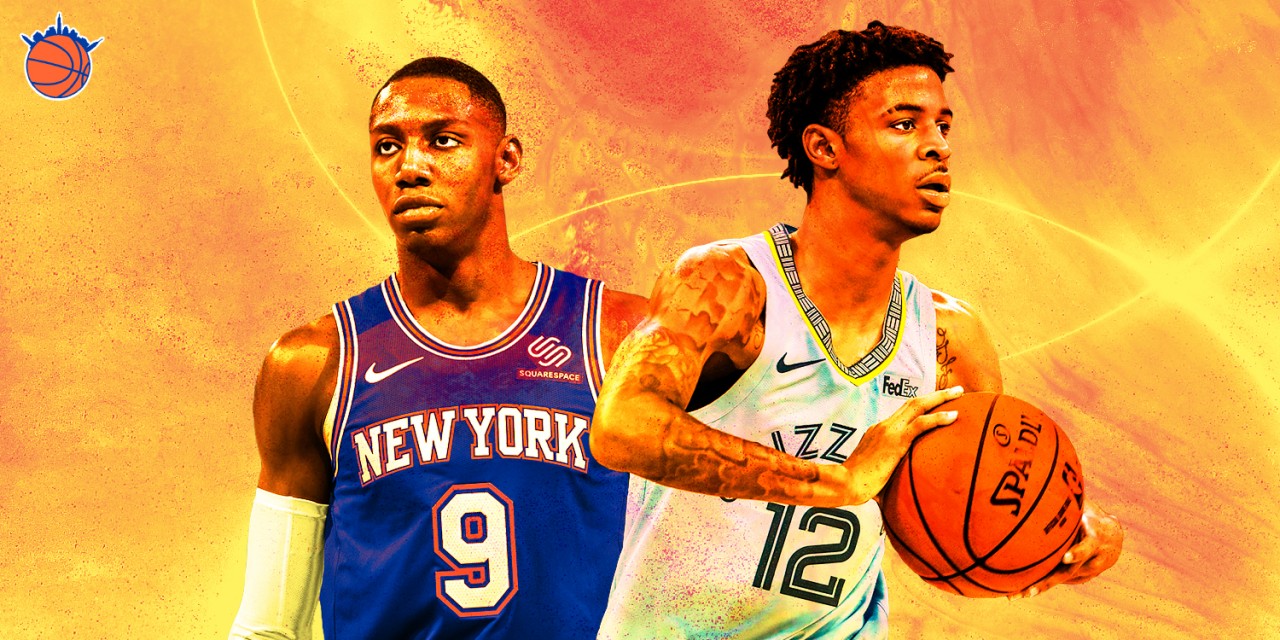 Does Knicks first-year guard RJ Barrett have a chance at the NBA’s Rookie of the Year award? The Duke product has stiff competition.

This winter, when the cold winds are blowing, the snow is falling, and the Knicks are losing, New Yorkers will have two blankets to wrap themselves in to keep warm. The first is comprised of two early-season wins against Kristaps Porzingis’ Dallas Mavericks; the second will be R.J. Barrett’s Rookie of the Year campaign.

With their highest pick since Patrick Ewing in 1985, the Knicks drafted Barrett, who had been the year’s consensus top-prospect until his college teammate, Zion Williamson, took the basketball world by storm during their freshman season.

“Hey R.J.,” Williamson called out across the locker room of the Garden after Duke played there last December. “Do you want to play for the Knicks?”

It was Zion’s way of deflecting from the onslaught of questions from the New York tabloids, but after the Pelicans and Grizzlies leapfrogged the Knicks in the lottery, the smile on the 19-year-old Barrett’s face as he said, “Yo, I’m a Knick,” was a clear answer.

Now fewer than 20 games into his career, Barrett has New Yorkers smiling as they watch, thinking to themselves, “Yo, R.J.’s a Knick.”

Thus far, Barrett has shown why many experts ranked him, not Williamson, as the top prospect in their freshman class. Barrett looks polished beyond his years; while also an indictment of the Knicks’ roster, there have been long stretches of games in which R.J. looks like the best player on the team.

Playing for an underachieving Duke team, and the subsequent nitpicking that followed during the pre-draft process caused Barrett to slide down past Williamson and sophomore point guard Ja Morant. While Duke had more talent on their roster than any other team in college basketball last season, their offense was often clunky and inefficient due to a lack of shooting.

Barrett took the brunt of the blame on this front. Williamson was a walking highlight reel, and Coach K is a living legend, so it must be the other top prospect’s fault. People resented Barrett for taking touches away from the phenomenon that was Zion, but notably, Barrett committed to Duke before Williamson with the understanding that it was to be his team. Barrett expected the offense to revolve around him, but by all accounts he and Zion became close friends when there could have easily been friction between the two.

It’s understandable how someone could watch Duke last season and have concerns about Barrett’s decision making, or if a lack of explosiveness would hurt him at the next level. But he’s wasted no time in proving that his flaws were largely overblown.

While the Knicks have yet to play 20 games, it’s never too early to hype up your star rookie. Looking at the Rookie of the Year race, a hot start from Memphis’ Morant has him ranked just ahead of Williamson as Vegas’ favorite to take home the trophy. Barrett trails both of them, but despite being sidelined until December, Zion was still considered the favorite until recently.

In his time at Duke, Zion exhibited that when healthy, he’s possibly the most exciting athlete in sports. Yet no one would fault New Orleans for playing it safe with their franchise player’s future when deciding when he should make his debut, especially with his unique frame and explosiveness.

If Williamson returned near the beginning of next month, played for the rest of the season, and looked the same as he did just before suffering this injury to his meniscus, then it would take a very special season for anyone else to walk away as the Rookie of the Year. However, should he sit out through Christmas, then the conversation changes.

Despite the Knicks’ struggles, Barrett and Morant comprise the top tier of non-Zion contenders for the award, by finding personal success in big roles for struggling teams. Morant is averaging 19.1 points with 6.3 assists and 3.1 rebounds a game while shooting 46.7% from the field and 40.6% from deep–so averaging 15.1 points, 5.6 rebounds and 3.6 assists on 41.3% and 34.7% won’t be enough for Barrett to win if Morant keeps up this pace.

Barrett will have to overcome the fact that, at 5-10, Ja’s Grizzlies are becoming a League Pass favorite. They’re playing at the league’s sixth-highest pace while wearing the league’s best throwbacks. Meanwhile anyone tuning into the 4-13 Knicks gets sees the third-slowest team in the league and a bunch of bad shots from Julius Randle. At least we still have Clyde and Breen.

Barrett leads all rookies in minutes per game at 33.4, so he’ll have plenty of opportunity to improve, particularly at the line. Although he’s taken more free throws than any other rookie, he’s converting only 49.4% of them. If he can get that percentage up to a respectable number, then the subsequent increase in his scoring average could put him over the top by season’s end. Seeing him go 10-for-12 in the three games prior to a pair of poor performances against Philly and San Antonio shows that there’s room for improvement this year.

Barrett’s scoring numbers will rise as he sees more touches once the veterans that Steve Mills and Scott Perry signed are traded at the deadline. Plus, after that we’ll never have to see Wayne Ellington subbed in for Barrett to close a game ever again.

With more than three quarters of the season left to play, and the favorite yet to suit up, the Rookie of the Year race is far from decided. However, Vegas contends that it’s largely a three-man contest between the top-three picks. Should that hold true and Williamson, Morant, and Barrett finish as the top three ROY vote-getters, then it would be the first time since 2005 that the first three picks in the draft were also top three in ROY voting. That year second-overall pick Emeka Okafor edged out Ben Gordon and Dwight Howard, who finished second and third after being drafted third and first, respectively.