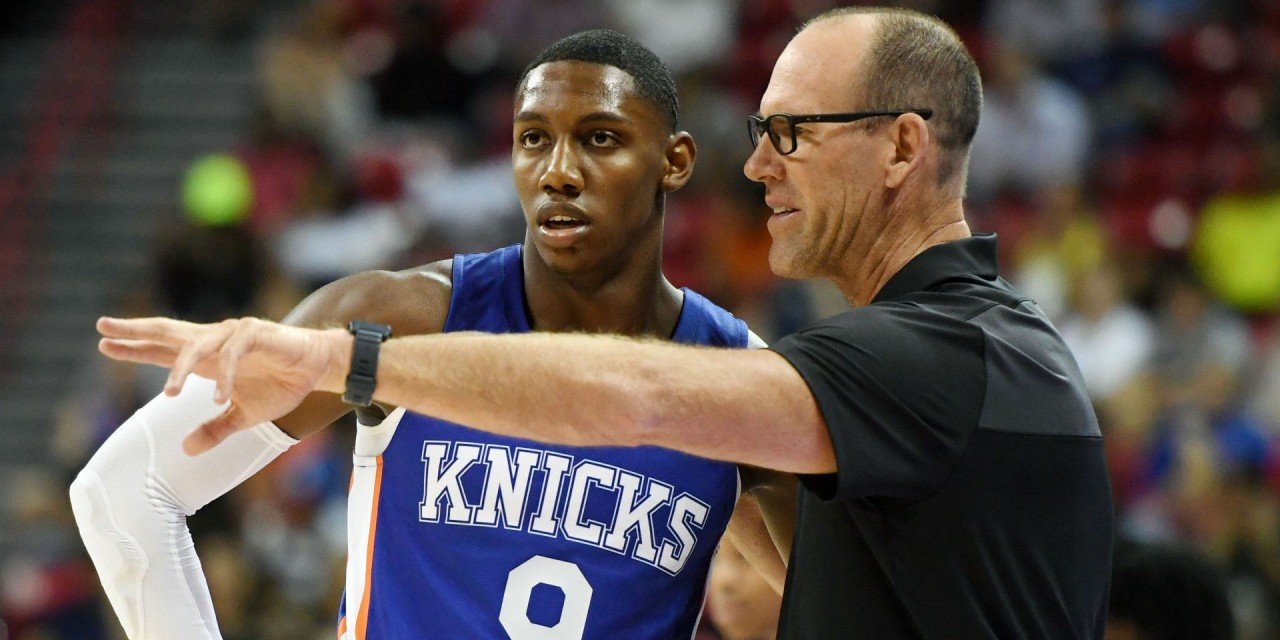 RJ Barrett spoke about basketball and fashion in a new interview, revealing John Starks as one of his favorite players.

Despite the constant negativity surrounding the New York Knicks, rookie R.J. Barrett is thrilled to join the team. He’s eager to get New York back to winning, telling Ben Detrick in GQ “to see what the Knicks were able to do in the past, and how the city really got behind them—you want to get back there so badly.”

Barrett also revealed that John Starks, one of the key players on New York’s last championship-contending 1990’s squad, is one of his favorite players.

“John Starks is one of my favorite players,” Barrett told GQ on an afternoon in late August, showing canny understanding of how passionately local fans lionize cult heroes from the team’s glory days. “To see what the Knicks were able to do in the past, and how the city really got behind them—you want to get back there so badly.”

Barrett, a native of Toronto, Canada, was drafted third overall by the Knicks in the 2019 NBA Draft. He averaged 22.6 points, 7.6 rebounds, and 4.3 assists in his lone season at Duke University before declaring for the draft earlier this year.

When prompted about the Knicks’ low expectations this upcoming season, Barrett was asked about the greatest number of games he had lost in a season. R.J. responded by saying he doesn’t lose.

“I’m not going to lie to you, I haven’t really lost. Maybe nine or ten games in the past five years. And even when I was younger, I was always winning championships. But losing is just a way to learn. It exposes your flaws.”

Barrett is likely to learn a lot in his first year with the Knicks, as the team is coming off a 17-win campaign and added zero All-Stars in free agency, much to the chagrin of the fanbase. Current oddsmakers and Las Vegas bettors have the Knicks at around 26-27 wins for the 2019–20 season.

Barrett was also asked about the rest of the NBA landscape. He told Detrick, “I’ve been watching a lot of Steve Nash, James Harden, and Russell Westbrook, guys that use the pick and roll and set people up.” Barrett also admires LeBron James’ well-rounded game. “He could pass, he could score whenever he wants, he could play defense,” he said.

When asked about Canadian NBA players Barrett spoke about them with pride. One such player he was asked about was his godfather Nash, a two-time league MVP and eight-time All-Star. He told GQ that Nash “is just so smart. He’s one of the most down-to-earth people you’ll ever meet. When you talk to him, you would never know he’s a two-time MVP and a Hall of Famer.”

In addition to basketball, Barrett spoke about fashion. When asked which player has the best pregame attire, he said: “The guys that are confident and comfortable with themselves, even if it’s crazy.” He then noted LeBron, Westbrook, and Harden as examples.

The 6-foot-7 swingman also revealed that he will be walking during New York Fashion Week, and that he practices his strut. “Oh, yeah. I’ve been practicing a little bit. I look into the mirror and try to see what looks good. I stop, pose, turn around, it’s a whole process,” he said.

Barrett also admitted that he only recently got into fashion and that he loves suits. “Whenever I can put a fresh, clean suit on, I’m like a peacock. That’s my most confident moment,” he said.